(from) US$ 403.64
Reserve
Property is in temporary annual closing.
Gallery

This property is annually closed. Reopening on 2/9/23

Add to my favourites
“Palace living in the vineyards of the Piedmont.”
Maître de Maison - Giuseppe dell'Erba
With heavy drapes, paintings, lavish period furniture, carefully restored parquet floors, this former summer residence for the Counts of Roero, built on the site of a medieval fortress, is a delight for the eyes. Surrounded by gardens designed in the style of 18th century Italy, overlooking the city of Guarene, it offers splendid views over the Langhe hills, a UNESCO World Heritage Site. A refined Piedmontese cuisine is served in the restaurant, and provides the occasion to taste the prestigious regional wines. At the end of a long brickvaulted hallway, the spa and indoor pool carved into the rock provide a peaceful retreat.
Relais & Châteaux Traveler Rating
Based on 439 Relais & Châteaux certified reviews.
Read reviews
Christian R.
"Unforgetable"
Unique property and experience, with very high quality of service and upkeep. ... Read
TRIPADVISOR traveler rating: 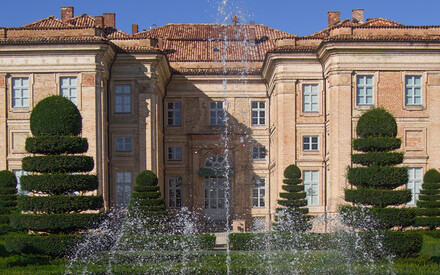 Based on 316 reviews
Read reviews
Our services
See all services

A castle has dominated Guarene from its hill for seven centuries. In the Medieval era a fortress stood on this site. In the 18th century a new summer residence was designed and built here for the Counts of Roero by Count Carlo Giacinto. Today, the palace continues to make people’s dreams come true. Preserved as it was in its heyday, with all its works of art intact, it is now also home to a top-class hotel. An essential stopping point in any itinerary of the Baroque highlights of Piedmont, it stands out among the very best places to stay in the region. The palace is an impressive three-storey edifice, reaching 25 metres in height and surrounded by extensive and elegant gardens landscaped in the Italian style in the first half of the eighteenth century. It commands an unequalled panorama of the whole chain of the Langhe hills from Monferrato to Verduno – this landscape, listed by UNESCO as a World Heritage Site, is covered with renowned vineyards and dotted with castles, towers and villages. In the other direction, it looks out onto the Roero heights and towards the distant Alps.