Set firmly in the heart of Europe between five countries, Switzerland has an astonishing cultural mixity.

Bringing a new harmony to the medieval ramparts, baroque palaces and wooden bridges of the surrounding towns, the landscape of Lake Lucerne now includes an ultramodern glass and steel music box by the French architect Jean Nouvel. It reflects all the facets of central Switzerland, its crown of Alpine peaks, its shimmering palette of blues, its patchworks of greens. A spectacular theater and the showcase of the Lucerne Festival Orchestra. In the summer, the faces of music lovers light up with the first sounds of the tuning violins. A Wagner opera is just the thing to exalt the iridescent highlights of the lake, its romantic fugues caressing the voluptuous curves of the nearby mountains, massive outcroppings of limestone and vertiginous ridges with evocative names… 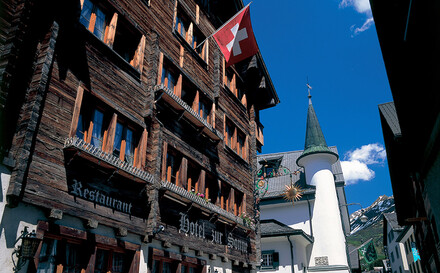 “The sun strikes your head from above, but then there’s another one, striking your back from below. That makes two: the one in the sky, emanating from a single, unified point, and the one below, which is broken into scattered pieces, because there is water bouncing back the light and hurling it towards the shore. That makes two suns shining together — which is why they have such good wine.” Charles-Ferdinand Ramuz immortalized the Suisse Romande in prose with the same power as Paul Cézanne’s palette in his depictions of Provence. Each sentence seems to retrace roots that grow from deep within this land. Its people, its vineyards, lakes and mountains are omnipresent. Like the high limestone hills caressed by the wavelets of Lake Biel. Along its western shore, at the foot of the Jura Mountains, dozens of different grape varieties thrive on the steep terraced slopes. 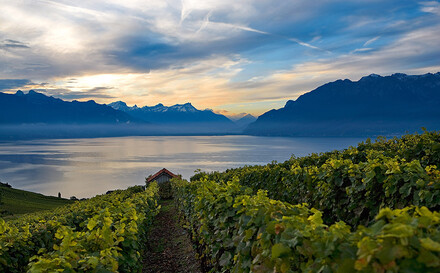