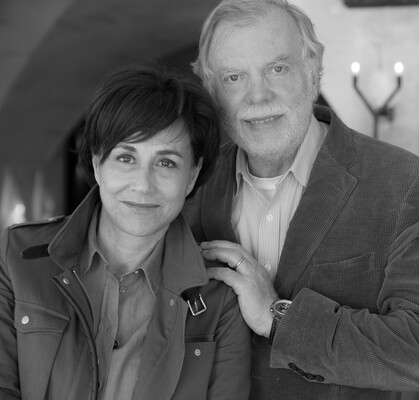 Always driven by passion and the constant desire to make the house evolve with the times, the owners, Jean-André and Geneviève Charial, accompanied by their teams, continue to write the history of Baumanière by combining tradition and modernity with elegance and sobriety in order to provide a unique and unforgettable experience.

Baumanière is masterfully managed by Jean-André Charial. The secret to his success? His desire to move forward and change with the times remains as strong as ever.

Raymond Thuilier opened Baumanière in December 1945. His grandson, Jean-André Charial, was born the same year. An inspired and visionary man, Raymond Thuilier passed on his talent, his firm-handedness and humanity to him. "I’d spend the holidays at Baumanière as a child", recalls the owner, movingly.

For over 70 years, Baumanière has promised much more than a luxurious escape. "It is a philosophy, an authentic and honest art of living, for which my grandfather Raymond Thuilier, who founded the establishment, gave me both the secret and taste. Elegance, restraint, respect for the environment and for people are values that Baumanière holds dear, the work of a visionary who created a paradise in his own image".

As invested as he ever was, Jean-André Charial is still involved on all fronts.

His young team has plenty to offer in terms of creativity. "I've no plans to retire. I want to maintain the legend of this place where so many personalities have stayed, as well as find new ways to make it even more beautiful and even higher quality", explains Jean-André Charial. Another goal of his was to regain the third Michelin star that the restaurant held for 35 years. "Baumanière may be an institution, but it’s a lively place as well, there’s always something happening".


"Cultivating an art of living"
Hostess Geneviève Charial brings her personal touch to the hotel and gardens every year. It is she who gives the venue its unique soul.

Geneviève Charial is always on the lookout for curiosities to decorate Baumanière in authentic Provençal style. She spends her time revamping, upgrading the decor and making the establishment more comfortable.

The art of living that Geneviève Charial cultivates revolves around simplicity and love for nature. Inside the various buildings, she ensures that every evocative space looks just so. "You can really appreciate the history in the rooms" she says, referring in particular to room 2 in the Oustau building, where Queen Elizabeth stayed in the Seventies.

Discretion is important to her, working "behind the scenes" to oversee the garden, the rooms and the Spa. In her boutique, she is keen to promote products from local craftspeople.