Add to my favourites
“Come play with us in the wilderness and enjoy all that nature has to offer!”
Maitre de Maison - Sarah Cruse
Your experience starts with your trip to the camp by sea plane or boat: you leave comfortable city life far behind and reconnect with the beauty of the wilderness. Here nature is all-enveloping, a huge expanse of ancient temperate forest with rare species and cedars more than 1,000 years old. Whale- and bear-watching, climbing, white-water rafting, archery, fishing and horse riding – the programme is varied and final decisions are only made each evening depending on personal preferences, the tide and the weather forecast. Guest tents have been recently refreshed to present a fresh new contemporary look to the accommodations with signature clean lines, generous appointments and pared back, refined luxury. End-of-the-bed views and specially commissioned furnishings from local designers evoke a personal connection with the Vancouver Island landscape.
TRIPADVISOR traveler rating: 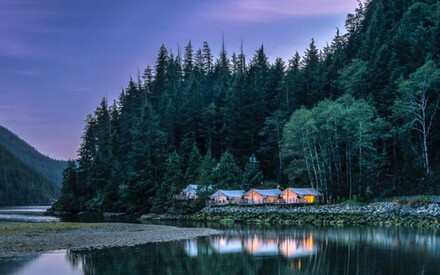 Based on 160 reviews
Read reviews
Our services
See all services