Once a year, the inhabitants of the Caribbean let loose in a frenzy known as Carnival. Here’s an overview of the greatest festivities, as seen by Relais & Châteaux establishments across the region.

Sylvie Berkowicz is a television producer, host and journalist who, despite having long lived in Canada, remains Parisian at heart. An inquisitive lover of dining, design, fashion and architecture, she weaves fascinating fabrics and fables from the many different threads of life.

Leave your worries behind and gather with others for music, dance, costumes and child-like wonder. Choose your fantasy role: you can be a superhero, a god, a clown, a king, a bejeweled princess... Forget real-life for an evening, a weekend or even a week, and join in the dream of a different world where judgments and limitations don’t exist.

Carnival is much more than just the debauchery of feather- and sequin-clad bodies. It is an open-air theater where the history of the islands is played out. And it is the pride of their inhabitants, a way of sharing the cultures and local traditions with travelers passing through. It is a party that exorcises the pain of the past, troubles symbolically burned at the end of festivities – it is the laughter that comes after tears.

As an active participant or a simple spectator, lose yourself to the pleasures of the Carnival: it is an enriching experience that leaves you spellbound, rejuvenated and refreshed.

The Carnival of Dominica, as told by Dinesh Kissoon, Maître d’Hôtel of Secret Bay:

“The Sensay is the emblematic costume of the Carnival in Dominica. It started as a massive heap of sisal twine, but today it can be made up of banana leaves or various other colorful materials or fabrics. No need to coordinate colors... In fact, the more eccentric, the better!

The Bwa-Bwa are the parade’s traditional characters. They stride forward on stilts that can reach more than nine feet high, dressed in flamboyant fabrics, faces made up with paint and glitter.

The Pappy Show Wedding is a party within the party: the caricature of a wedding featuring the strangest costumes imaginable, which makes the wedding even better. The newlyweds and their guests go from door to door, putting on their show in exchange for spare change, drinks and food.

The Calypso Shows are dance competitions held to elect the kings and queens of the Carnival. Following the eliminations, a great celebration honors the dancers for an unforgettable night.

The Jouvert (a contraction of the words “jour” or “day” and “ouvert” or “open”) begins during the Sunday evening before Mardi Gras. In exceedingly unusual evening dress, party-goers fill the streets until sunrise the next day.

To conclude the late February celebrations, after Parade Day, the most extravagant costumes of the Carnival are presented, and the most creative are elected in various categories.”

The Carnival of Grenada, as told by Hannah Budhlall, Development Manager of Hôtel Calabash:

“Carnival, better known as ‘Spice Mas’ in Grenada, is a spectacular showcase of the island’s creative talent in the form of musical and dance entertainment and costume design, in celebration of the freedom of Grenada’s people. Songwriters compose musical pieces with lyrics based on the current political, economic and social affairs on island while masqueraders dance in enjoyment to the music, some of which incorporates the sweet sound of the steel pan or the ‘Big Drum’ which originates from Africa. The early Monday morning J’ouvert parade has become the most popular event of Spice Mas, starring the ‘Jab Jab’, who are masqueraders covered in all black oil or paint, reenacting the slaves showing their retaliation against their captivators.

The Pretty Mas masqueraders are the Carnival’s foremost ambassadors. They parade along in magnificent, brightly colored costumes, each based on a specific theme in connection to a cultural or historical aspect of Grenada. The confident, proud way that they dance illustrates the joy that the slaves felt when they were finally freed and were allowed to join in European festivities to create the West Indian Carnival that we know and love today.”

The Carnival of Saint Barthélemy, as told by Felipe Sandoval, Marketing Director of Hôtel Le Toiny:

“The Carnival of Saint Barthélemy is that special moment when visitors, inhabitants, the young and the not-so-young mingle in a fantastic parade on the first day of March that embraces the traditions of our island. Saint Barthélemy has a very unusual history, and because of the absence of slavery on our island, this event is not seen as a commemoration but rather as an opportunity for communion between our inhabitants and our precious visitors.

The festivities are divided into three distinct events: the children’s carnival is a mini-parade in Gustavia for the children of the island, who dress in their own costumes; the traditional Mardi Gras parade in Gustavia (for adults, of course), where various floats and contemporary costumes represent the history of our island.

Finally, there is the burning of Vaval, a key moment of the Carnival. Vaval is a giant puppet with a monstrous appearance. He represents the fears and pain that we wish to let go of, so they rise to the sky with the flames. That takes place on the last night of the Carnival at Shell Beach.”

The Carnival of Anguilla, the island where Quintessence Hotel is located:

It is during the summer – in the first week of August – that this Carnival takes place, from late July, featuring dance, music and sports. Calypso and Soca are the two main musical genres of the festivities, and singers and composers make the most of the event to release albums and present new songs for the first time. The groups face off for the title of champion in their category (Junior, Women, Men), but most of all for the grand prize of the Leeward Island Calypso Competition, which includes musicians from all the neighboring islands (Anguilla, Antigua and Barbuda, the British Virgin Islands, the U.S. Virgin Islands, Saint Kitts and Nevis, Saint Martin and Montserrat).

Meanwhile, the sailing competitions are getting underway. Sailing is the national sport of Anguilla, and the most famous race is the Champion of Champions boat race, which takes place on the last day of festivities.

It’s worth mentioning that the Quintessence Hotel – the only Relais & Châteaux establishment in Anguilla – closes for the season on July 31st, the day before the festival (to reopen on November 1st). That allows our employees to enjoy the celebration, which is so important to the locals. 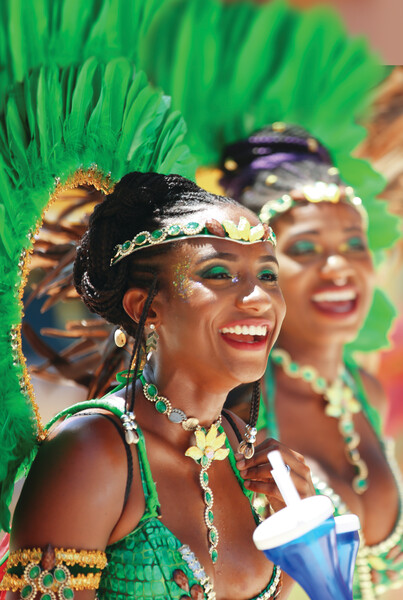 The Carnival of French Guiana:

Two months of celebration take hold of the island from Epiphany in January to Ash Wednesday in March. Every Sunday during that period, a parade is held, featuring a procession of traditional characters.

The main characters are the Touloulous, the queens of the Carnival. They wear padded, richly adorned dresses to parody the bourgeoises of the 18th and 19th centuries. Their bodyguards are called Nèg'marrons, whose bodies are coated with oil and soot.

They are surrounded by an extensive array of figures, each playing a specific role: the Soussouris (bat), the Zombi Baréyo (zombie), the Bobi (bear) and his master, the cane-cutters, the Jé Farin (baker), the Djab rouj (red devil), the Karolin (a rich, jealous woman who carries her husband on her back), the Balayeuses (sweepers), the Tirailleurs sénégalais (Senegalese soldiers) and the Vidangeur (harvester). Finally, there is King Vaval, the hero of the parade: a giant dummy presented to the crowd on Sunday and burned on Ash Wednesday.

The Carnival of Santo Domingo:

The great parade of the Santo Domingo Carnival will take place on the Malecón on Sunday, March 6th this year.

It also features a colorful array of characters including Roba la Gallina (a male chicken thief who dresses as a shapely woman), Devils Cojuelos (a playful, mischievous, limping demon who hits the crowd with his leather ball) and Califé (a satire of the white elite).

Africans and Native Americans represent the aborigines of the island, while there’s also Death in a Jeep (death), Nicolás Den Den (the bear tamer), the Alí Babá (Oriental dancers), the Platanuses (who cover themselves with dried banana leaves), and the Lechones (dressed in multi-colored costumes adorned with mirrors and rhinestones).