For Instants, hotelier-writer Marie-Christine Clément shares her travelogue in six “unforgettable moments” across China, exploring the land’s traditional crops and culture. The last leg of her journey is one hour from Taipei, in the mountains, where Volando Urai hosts the most disconcerting show.

Marie-Christine Clément is a French writer specialised in taste and mental representations of food. After about fifteen books devoted to the cooking of great figures in French literature (Colette, Georges Sand, the Countess of Segur), to the education of taste for children, the imagination of vegetables or the history of chocolate in the 19th century, she is now passionate about tea. Back from Asia, she reveals some delicious moments gleaned in China or Taiwan. With her husband, chef Didier Clément, she runs the Grand Hôtel du Lion d'Or in Romorantin-Lanthenay.

There is a man, there is a woman. They wear long, wide-sleeved white coats, red scarves wrapped around their necks. They are motionless. Eyes closed. Sitting in the lotus position on the water, facing each other, floating. The wind caresses their faces, ruffles their hair. Their reflections undulate on the surface in two inverted triangles. The tumultuous waters of the Urai descending from the mountains of the Wulai District do not perturb them. The water – several meters deep and of surreal clarity – crashes thunderously right beside them. They wholly sense its strength, intimately experience its power. The trees clinging to the mountain just across from them frame this open-air temple with a dancing wall.

The man and the woman are suspended between two worlds. Long minutes. Improbable statues. At last, the man’s arms slowly rise. A sail unfurling. A human butterfly taking flight. The wind sweeps against his sleeves, briskly flapping the fabric. Then he lowers his arms, first one, then the other; a wooden mallet becomes visible, with which he strikes the bronze bowls before him. Crystalline tones rise into the air, multiply, wander away into the valley, melt into the wind, vanish into the water. The man caresses or strikes each bowl as he is inspired, sometimes swiftly and firmly, sometimes softly, contemplatively. It is delicate music, moved by the moment and then lost forever, blending with the elements, soothing the wind, taming the river. When he has finished, he raises his hands over his head again and, in a final prayer, extinguishes the vibration with two of his fingers. New silence. Water, air, and wind return to their primitive sonic kingdom.

Now the woman takes this singular stage. The bowls’ sounds are lighter, accelerating or softening at the will of her nimble, graceful hands. Their eyes are still closed. They are still motionless. The man and the woman communicate through the invisible waves. They play a game of silent chess. I am seated at water’s edge, not far from them. I dare not bring my cup to my lips. The valley swells with concentric vibrations. The mountain breathes. For a few moments, the world seems suspended in time and space. The valley dilates. Then, here by the water, the world regains its proportions. The man unfolds his person, majestically letting his white coat fall, a corner of which trails in the water, and he abandons it, as though having shed his skin.

A thunderclap rumbles in the mountains. The man on the shore, impassive, acts as though he has heard nothing. He continues slowly around the pool. Thunder sounds again, then again and again. A solemn gong, insistent reverberations. The gods have come to join the chess game. Then Rosen Siran stands, unmoving, before a huge drum on a tripod, at head height. He spreads his arms, lets loose an enormous cry, and begins to frenetically beat the drum. The man is challenging the gods. The gong in the mountain answers him and converses with him. The drumbeats seek to persuade. The valley returns their echo. The sound amplifies. My heart beats wildly. 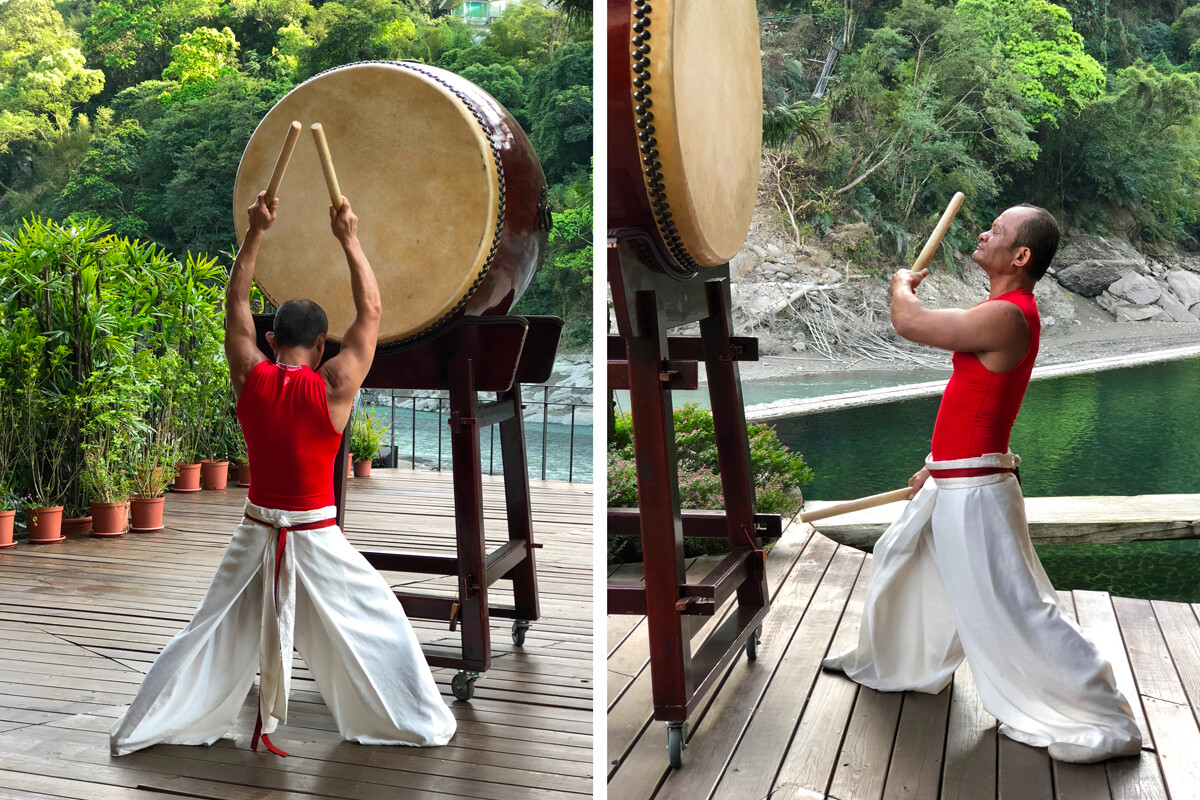 The man, the wind, the mountain, the river are one. The dialogue with the gods is unceasing. In the mountain, the Gong Master simulates the rain, the storm, the hail, the unleashed elements. His name is Wu Zong-Lin and he lives in a small green house hanging in the trees. It is invisible at first: You must look closely to detect it ensconced in the foliage. But, once it has been seen, you never feel alone again. The mountain has eyes. A spirit is watching you. But Rosen Siran, the drummer, knows how to mollify people and spirits. The tea I drank that afternoon had never been so aptly named – Tie Guan Yin, Iron Goddess of Mercy. This one was Taiwanese and smoked with longan wood. I knew it drew its strength in Fujian province, its roots braving the high, barren rocks of the Wuyi Shan Mountains.. I also sensed that, once I set down my cup, I would never again be able to find that taste, the flavor of that miraculous spring day when I saw a man converse with the gods at Volando Urai.