Emblematic of the mischievous Gallic sense of humor, “April Fish Day” (April 1st) is the French version of April Fools’ Day. In honour of this curious custom, we invite you to sample some of April's greatest catches from rivers, lakes and seas the world over, courtesy of our amazing chefs. 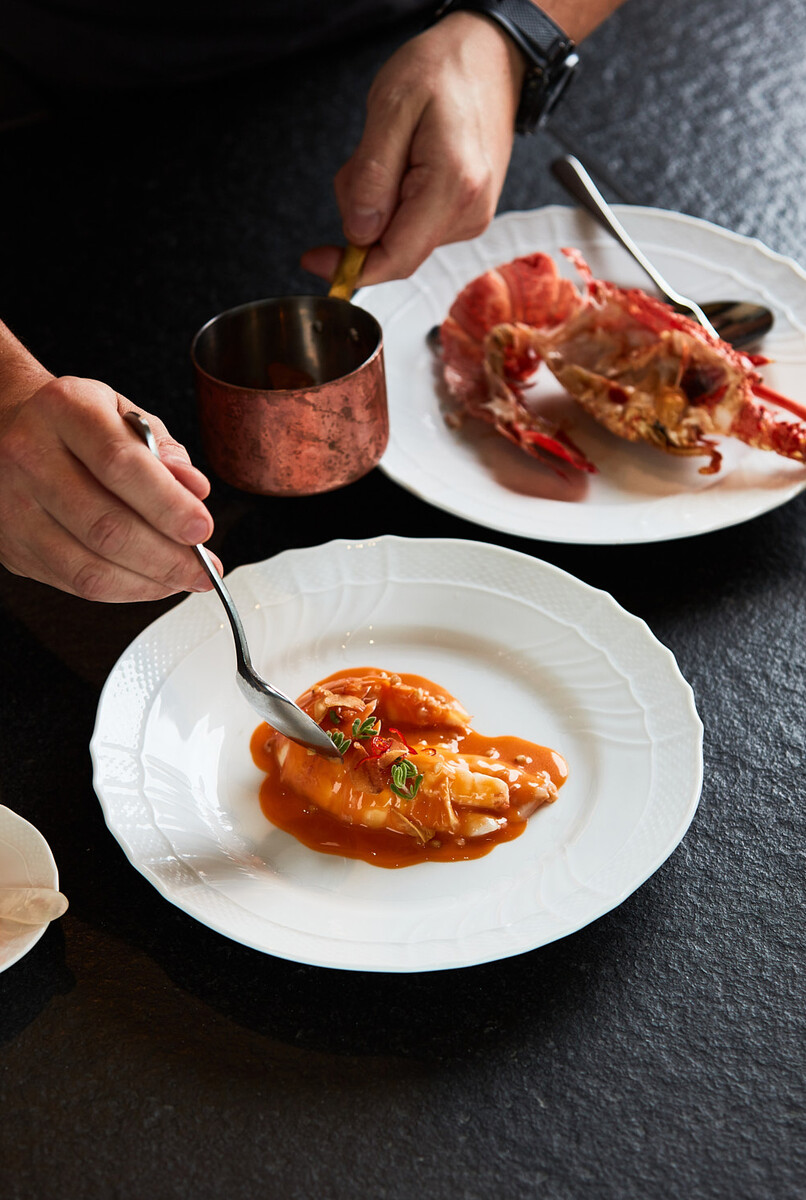 Where to taste it: With Chef Josep Espuga at the Laura restaurant at Pt. Leo Estate in Australia.

Where they catch it: In the eastern Indian Ocean, in Port Phillip Bay, 50 km / 31 mi south of Melbourne. The fishing method use is “pot caught”. The stock of south Australia is considered as sustainable.

Peak moment to enjoy it: Between the end of the austral summer (which culminates from November to April in the Southern Hemisphere), and early autumn.

Get a glimpse behind-the-scenes: “It’s also high season for tomatoes here in the Mornington Peninsula. At this time of year, we serve lobster with Aurore Maigre sauce – which is a seafood-based sauce – and with candied tomatoes from Daniel's Run farm.” 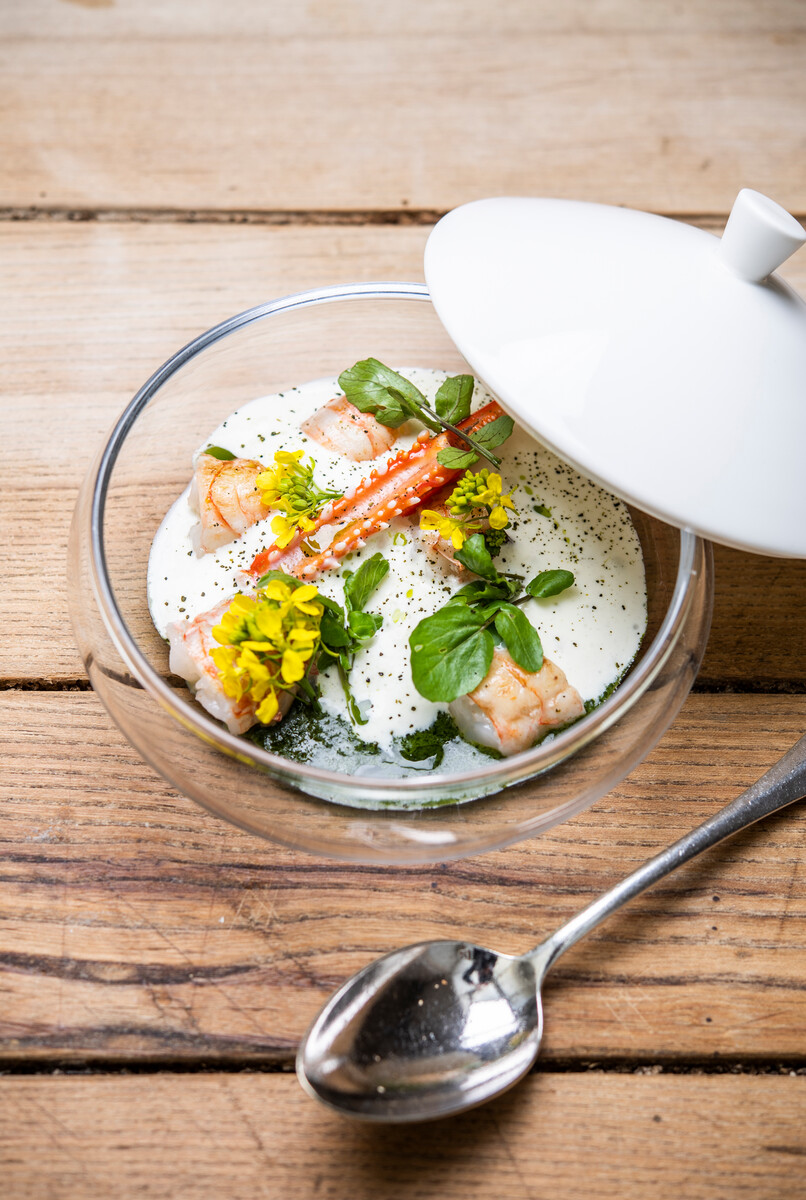 Where to taste them: With Chef Anthony Avoine at the Manoir de Lan Kerellec in Brittany, France.

His favorite “April Fish”: Scampi, for its firm meat and slightly sweet taste, which makes it a sought-after delight for epicureans.

Where they catch them: In the North Atlantic, in sandy seabeds (stocks in western Scotland, North Sea, northern and central Bay of Biscay, western and southwestern Ireland, Porcupine Bank are in good condition, but to be consumed with moderation).

Peak moment to enjoy it: April to October.

Get a glimpse behind-the-scenes: “Surf-and-turf combinations generally work well with scampi. In April, we prepare it with a buttermilk-and-basil foam and a bit of lemon leaf stock.” 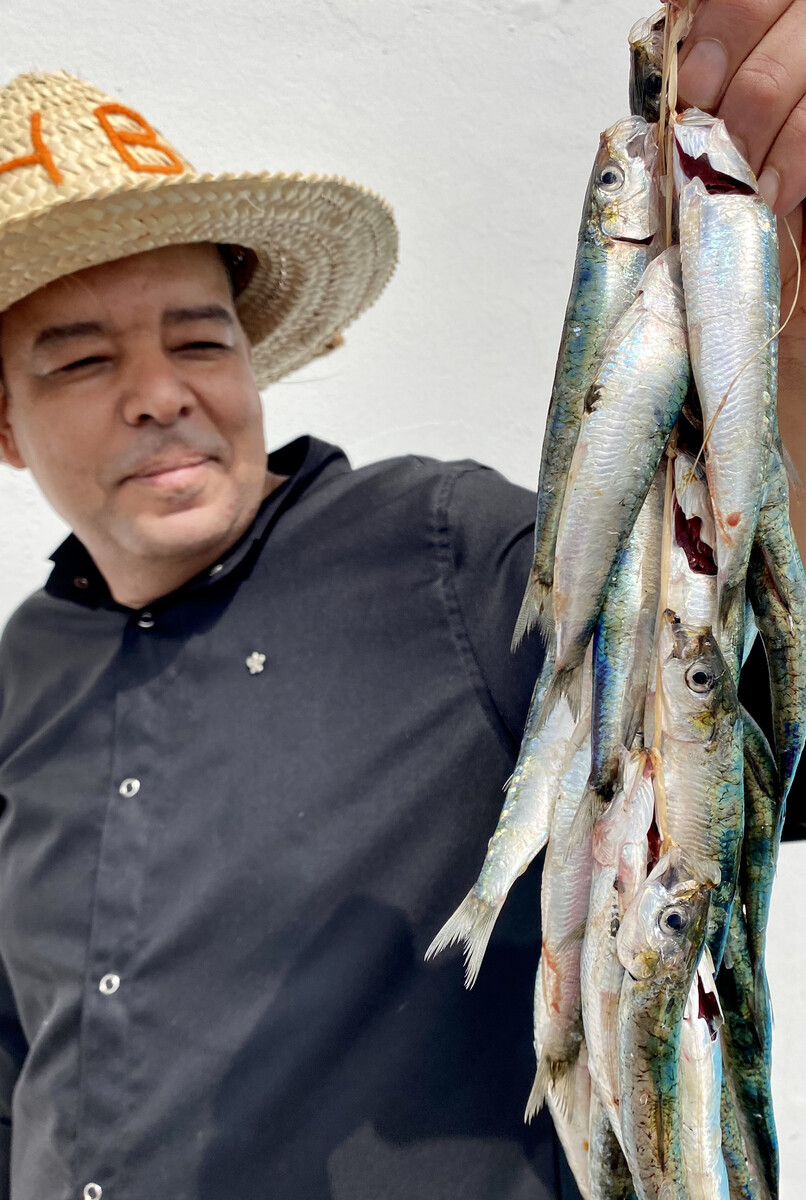 Where to taste it: With Chef Ahmed Handour at the Heure Bleue Palais in Morocco.

His favorite “April Fish”: The sardine is the emblematic fish of the Moroccan coast.

Where they catch it: Moroccan sardines are fished all along the Atlantic coast from Safi to Essaouria, all the way down to Mauritania. Stocks in this geographic area are doing well.

Peak moment to enjoy it: Although sardines are fished throughout the year, they are particularly small and flavorful in the springtime.

Get a glimpse behind-the-scenes: “Enjoy them in a variety of ways: simply grilled and smoked, chopped into fish balls and cooked in a tajine, or stuffed with chermoula.” 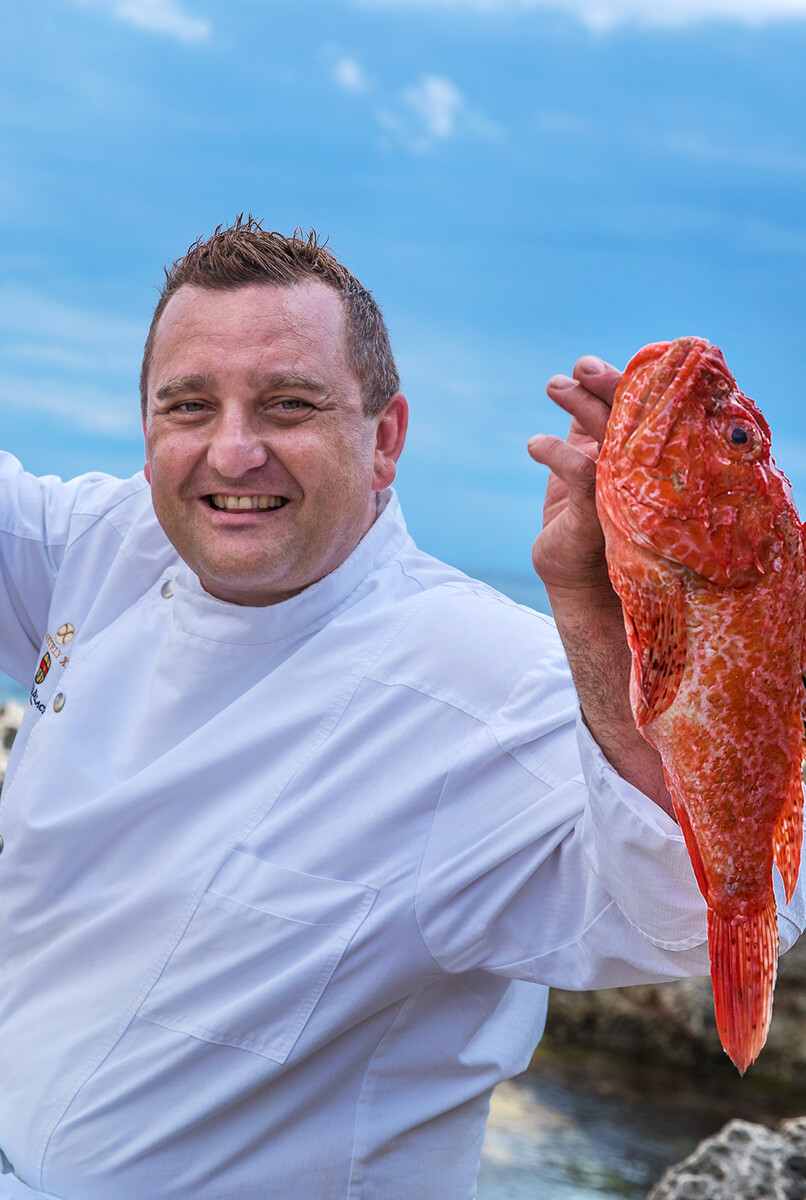 Where to taste them: With Chef Kevin Bonello at The Xara Palace in Malta.

Where they catch them: These small fish are caught on lines in the Mediterranean Sea and off the southwestern Maltese coasts, near rocky areas of the seabed. There are many species of scorpionfish in the Mediterranean (the best known is Scorpaena scrofa). They are little followed scientifically and the state of their stocks is unknown. They should be eaten in moderation, with a preference for angling.

Peak moment to enjoy them: Towards the end of winter and beginning of spring is the best time to catch and cook rockfish. 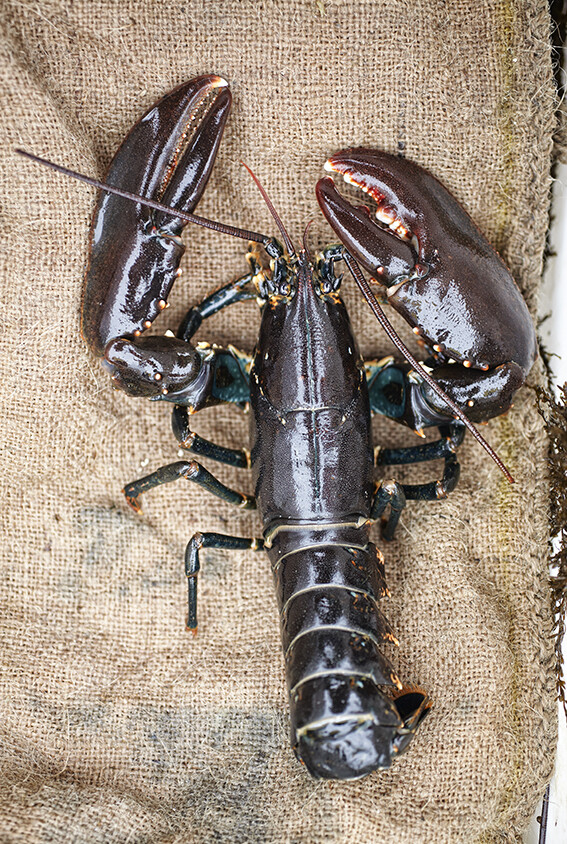 Where to taste it: With Chef Jef Schuur at Bij Jef in the Netherlands.

His favorite “April Fish”: A variant of the European lobster, the Oosterschelde lobster is one of the most delicious species of lobsters in the world.

Where they catch it: In the Oosterschelde National Park located in the southwest of the Netherlands. The lobsters are not raised there: they actually live in the wild and are caught when they reach full maturity.

Peak season to enjoy it: Officially from the last Thursday in March to July 15th. 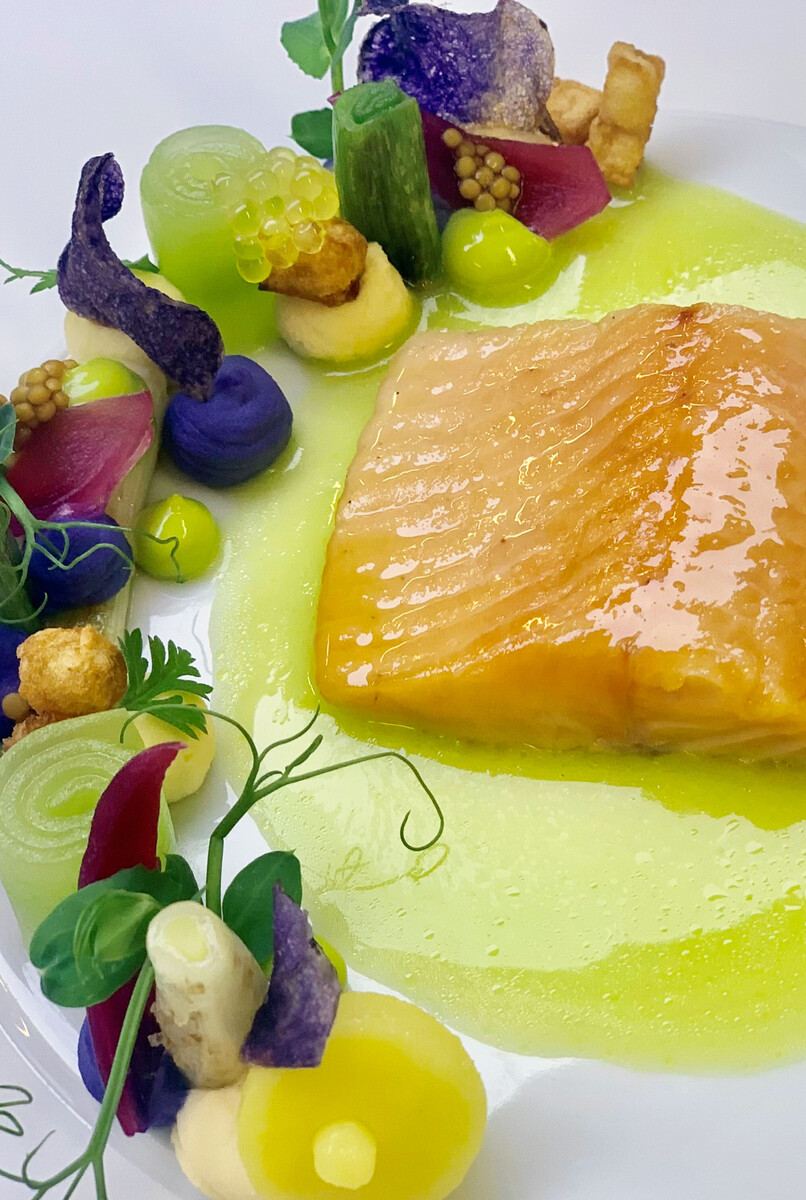 Where to taste it: With Chef Claus Peter Lumpp at Hotel Bareiss in Germany.

Where they catch it: The establishment possesses its own sustainable fish farm.

Peak season to enjoy it: In the springtime. Its fresh taste perfectly accompanies the available seasonal produce.

The chef’s secret: “This buttery fish is ideal with fresh herbs, spring asparagus, tender sorrel, and so on. I also like to poach it in oil.” 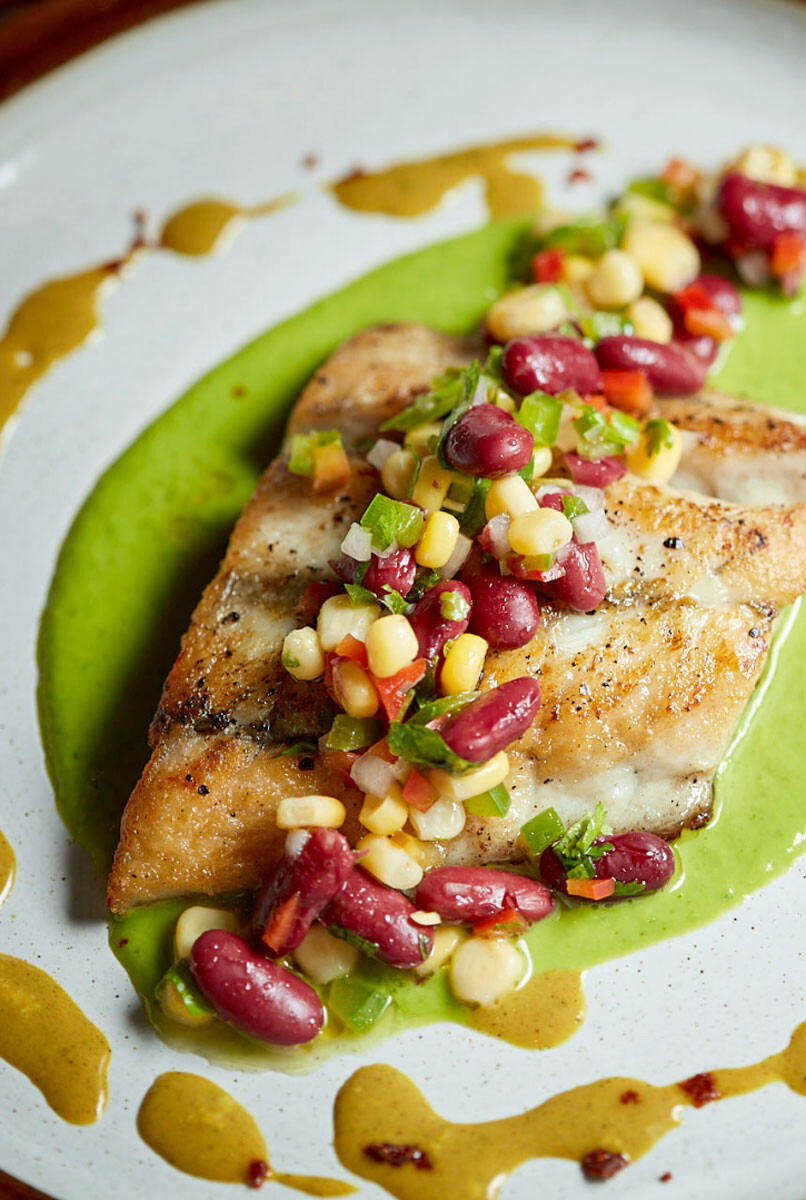 Where to taste it: With Chef Nishantha who is Resplendent Ceylon's Culinary Standards Manager and overlooks food and beverage at all three resorts, Ceylon Tea Trails, Cape Weligama and Wild Coast Tented Lodge.

His favorite “April Fish”: Grouper has a unique, mild flavor: light and slightly sweet, it is like a cross between barramundi and sole.

Where they catch it: In the western Indian Ocean, but also a great deal in the Mediterranean.

Peak season to enjoy it: In late winter and early spring, its average weight is 3.3 lbs / 1.5 kg. That is the ideal size of a fish that will be firm, white and succulent.

Get a glimpse behind-the-scenes: “Once cooked, the flesh turns pure white, and the skin easily absorbs all the flavors of the vinaigrette, sauce or stock that it is cooked in or topped with. The meat is very firm when cooked, with large flakes, and it maintains its moisture better than most other fish.”