Add to my favourites
“All the pleasures of New Zealand”
Maître de Maison - James Mackay
Far out to the east of Hawke’s Bay wine country, The Farm at Cape Kidnappers sits atop rolling farmland and rugged cliffs that give way to vast sea views. Home to not only a lodge and spa, this unique property also boasts an award-winning Tom Doak-designed golf course and a sanctuary for some of New Zealand’s most precious flora, fauna and endangered animals. Warm and enveloping, its generous suites and Owner’s Cottage deliver sumptuous comfort and awe-inspiring panoramic views. The main lodge overlooks the working farm, golf course and Pacific Ocean, and houses the guest lounge, library, wine cellar and snug, providing a variety of options of dining locations. And never short on incredible experiences, activities include exploring the expansive estate on horseback or Can-Am and hiking any of the many walking trails.
Relais & Châteaux Traveler Rating
Based on 97 Relais & Châteaux certified reviews.
Read reviews
David S.
"EXCEPTIONAL "
This is one of the finest facilities we’ve stayed at worldwide! Phenomenal! ... Read
TRIPADVISOR traveler rating: 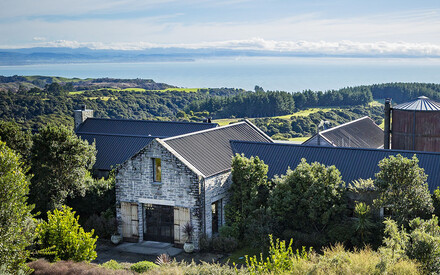 Based on 312 reviews
Read reviews
Our services
See all services