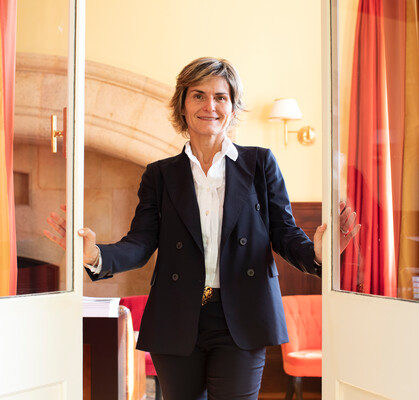 Can you tell us the story of your property?

General McMurdo built Villino della Pergola on the pre-existing residence of the counts of Lengueglia, which he called "Casa Napier" in honour of his father-in-law, General Sir Charles Napier, whose statue can be seen in Trafalgar Square in London. The Villino, designed and constructed according to the Anglo-Indian principles and taste found in the architectural style so loved by the British who had lived most of their lives in the military in India, or as civil servants or businessmen, was built over three levels and given a spacious loggia following the custom at that time for British houses built in India and Malaysia for officials of the British Empire. In 1880 the McMurdo family began to work on Villa della Pergola. This building was larger in size than the Villino and in a slightly less elevated position. The Villa was instead built following a rather eclectic taste, again setting out a spacious loggia but at the same time including elements of greater prestige and opulence such as the dome clad in polychrome majolica from Albisola, the array of marbles and the fountain near the grand staircase. The design of the park was also the work of the McMurdo family.

Initially conceived as the natural continuation of the interior are as of the villas towards the sun and Mediterranean flora, the park was developed over various terraced levels, following the natural contours of the hill and making space amongst the olive and orange groves for the Canary Island date, Washington, and date palms and, of course, cypresses in homage to the Tuscan countryside and avenues so loved by the Anglo-Florentine community.

When General McMurdo died in Nice in 1894, his widow Lady McMurdo and children sold the villa to Sir Walter Hamilton-Dalrymple, a Scottish baronet descended from an old, noble loyalist family from North Berwick in Scotland.

In 1908, William Scott in his art historic travel guide "The Riviera" explained, "A worthy rival to the botanical gardens of Thomas Hanbury in Mortola can be found in the magnificent property of Villa della Pergola, be longing to Sir Walter Hamilton -Dalrymple. Here a genuine love for nature, an intimate knowledge of the art of gardening and a perfect taste in design, combined with a careful and generous budget, have produced one of the marvels of the Riviera".

The Dalrymple s maintained ownership of the villa for a further 20 years until 1922, when Sir Hew Clifford Hamilton-Dalrymple, 9th baronet, sold the residence to Danie l Hanbury, second child of Sir Thomas Hanbury of Mortola.

Thomas Hanbury, excellent businessman and owner of the Mortola gardens, had already sensed the potential of Alassio as a winter health resort, envisaging for it the same fortune as Menton, Bordighera and San Remo. For this reason on his death in 1907, he left his son Daniel in charge of the property activities undertaken in Alassio.

The Hanbury family clearly gave a major boost to the completion of the Villa's garden, transferring varieties of South American cactuses, collections of cycads and Australian eucalyptuses as well as various other types of species from the Mortola botanical garden, significantly increasing the variety of exotic plants in the park at the Villa.

In 1940, at the outbreak of the second world war, the Hanbury family returned to the UK, like the majority of British on the Italian Riviera. The widowed Daniel married his second wife Ruth Hardinge, also from a British family in Alassio. In 1946 the Hanburys returned to Alassio to resume work interrupted by the war, but Daniel died suddenly in 1948, and with him died the chief architect of Alassio's success as an elite winter health resort.

Ruth went to live in Villa della Pergola assembling around her a small and meagre community of 'Anglo -Alassians', now a shadow of the thousand pre-war British residents. Her spring parties during the flowering of the wisteria were renowned. Guests often included author Cecil Roberts, who would dedicate his book "Portal to Paradise " to Alassio, and the Bishop of Gibraltar, who every spring went to visit the Anglican communities on the Riviera, staying as Ruth's guest.

In 1925 Alfred Hitchcock filmed scenes from his first film "The Pleasure Garden" on the beach in Alassio and in the park of the Villa and in 1957, the Oscar winning filmmaker Guy Green set "The Snorkel" with Betta St. John, Peter Van Eyck and Mandy Miller in Villa della Pergola. Author and artist Carlo Levi used the Villino as an annex for his nearby villa in the 1960s and 70s, immortalizing the Alassio scenery in countless paintings.

Villa della Pergola offers to its guests a setting unlike any other. Located in the heart of its private 2 hectares of botanic gardens, you will find 15 luxury rooms extremely comfortable and most of them offer stunning views over the sea. One of the most exclusive address in Liguria, where guests have access to a corner of paradise.

What is your trademark in terms of the art of generosity and warmth?

Our attachment to our house, our roots, our culture, our tradition and our land. Share these values with our guests and have the privilege to hand over to them like a member of our family.

What memories do you want to give your customers?

Villa della Pergola is a result of an act of love of the property that saved it from a building speculation. Years of careful restoration have made it possible to bring it back to the beauty of the past. Having the possibility to share with our guests this heritage, is an exclusive privilege for both. In addition to this, the flavor of the local cuisine, the enhancement of the human relationship that is created between the staff and the guest, the invitation to visit hidden corners of the region are added values.

What passions do you share with your guests at your property?

The beauty of the place, the art the vivre, the value of the small producers of local oil and wine, outdoor sports activities (long walks on the beach and e-bike excursions), focaccia!