This small Caribbean island is so beautiful and wild that we would like to keep it secret. Let's go to Dominica, a confidential landmark off the beaten track and a preserved Garden of Eden.

Chicago-based journalist Amber Gibson specializes in travel, food, wine and wellness. She spends 350 nights a year on the road and has a column with Forbes. Her work also appears in Saveur, Departures, Robb Report, Conde Nast Traveler, NPR and National Geographic Traveler. Gelato, dark chocolate and champagne are her biggest weaknesses.

Even many seasoned world travelers are not familiar with this rugged volcanic island, situated between Guadeloupe and Martinique in the Windward Islands. The lack of cruise ships and direct flights from the continental United States or Europe limits tourism to a select few, those “au courant” travelers seeking a different kind of Caribbean escape. 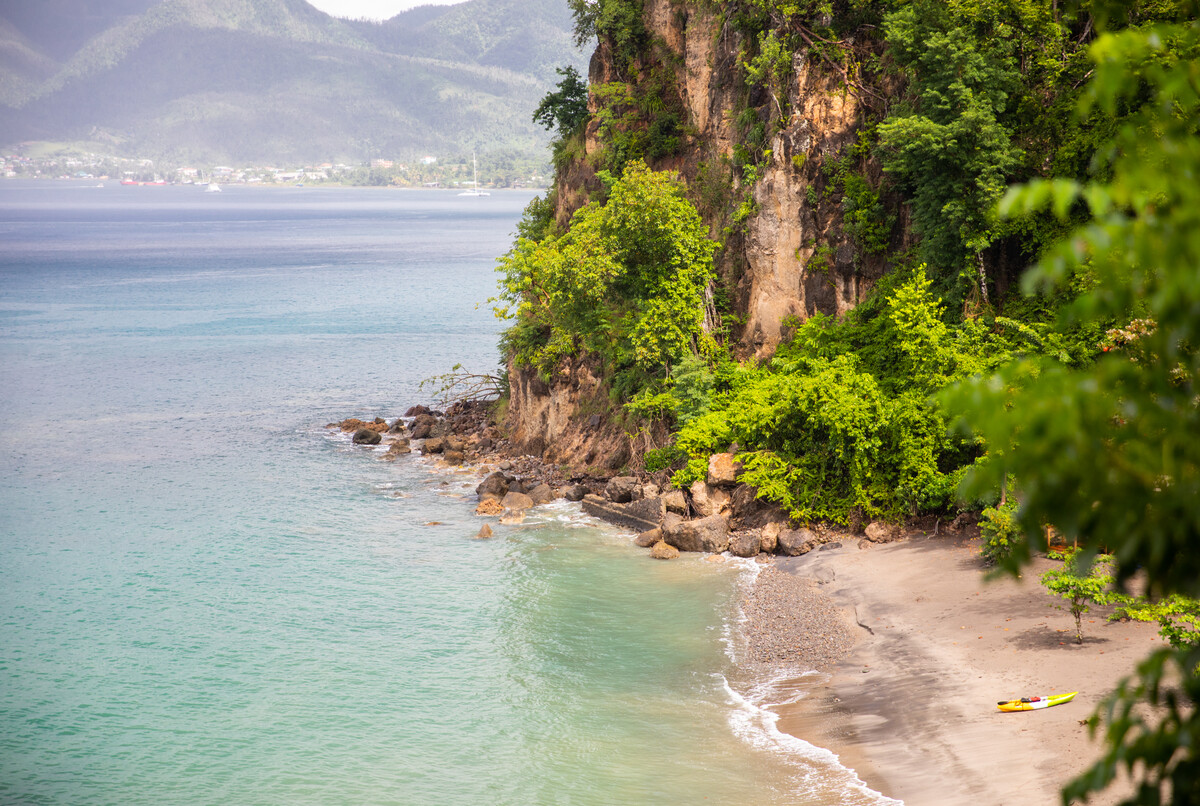 Dominica remains an under-the-radar destination, meaning its lush rainforests, cascading rivers, natural hot springs and tropical flora and fauna thrive in pristine conditions without the negative ramifications of human impact. Active adventurers have endless options for outdoor exploration, but when it's time to rest and relax, there's only one option for true intimate hideaway on the island – Secret Bay. With just twelve sustainably built private villas, guests are entirely immersed in nature, with expansive open-air living spaces, contemporary kitchens (pre-stocked for your arrival) and private plunge pools. It feels like arriving in paradise after a long journey. The perfect way to relax before discovering the hidden treasures of the island.

The island is only 47 kilometres long with a population of less than 70,000, yet it's home to three national parks. Morne Trois Pitons National Park, on the southern half of the island, is perhaps the most famous, designated a UNESCO World Heritage site in 1997. There are dozens of hiking trails here, for all levels of physical fitness to explore the volcanic hills and canyons, weaving between geysers and mud pools accompanied by a soundtrack of Amazon parrots. When it's time to take a break, you can take a dip in one of three freshwater lakes, or cool off under the cascading waterfall at Emerald Pool. Another dramatic highlight is the Valley of Desolation, where more than 50 brightly colored hot springs add a breath of life to the otherwise barren landscape. 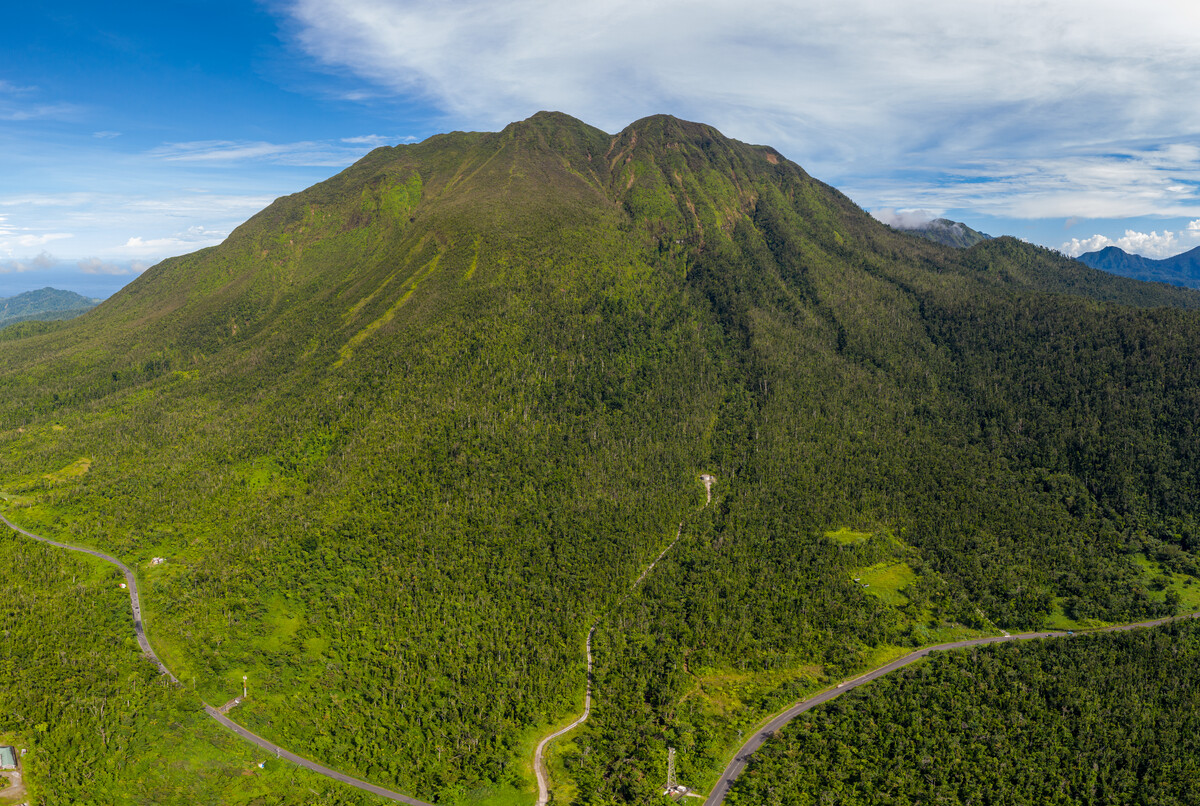 Waitukubuli National Trail, one of the most beautiful treks in the world

Ambitious hikers can even tackle the Waitukubuli National Trail, the longest hiking trail in the Caribbean that crosses the island from north to south in 14 stages through national parks, reserves and villages. Hundreds of hikers attempt the trail each year, and it takes about two weeks to complete. If you don't quite have the time or stamina, consider a more leisurely day of sightseeing with Secret Bay's Waitukubuli by Sea excursion. Guests are picked up Secret Bay’s Tibay Beach and will view sea caves, waterfalls and dormant volcanoes along two of the trail's 14 segments, with an option for snorkeling in the warm shallows at Split Rock.

After a long day of hiking, the best way to soothe sore muscles is with a soak in the natural sulphur hot springs at Wotten Waven, a tiny village of just over 200 people. The muddy mineral springs are thought to have healing powers and the stone pools at Ti Kwen Glo Cho, enclosed by elevated cliffs and complemented by lush gardens are equal parts romantic and therapeutic. 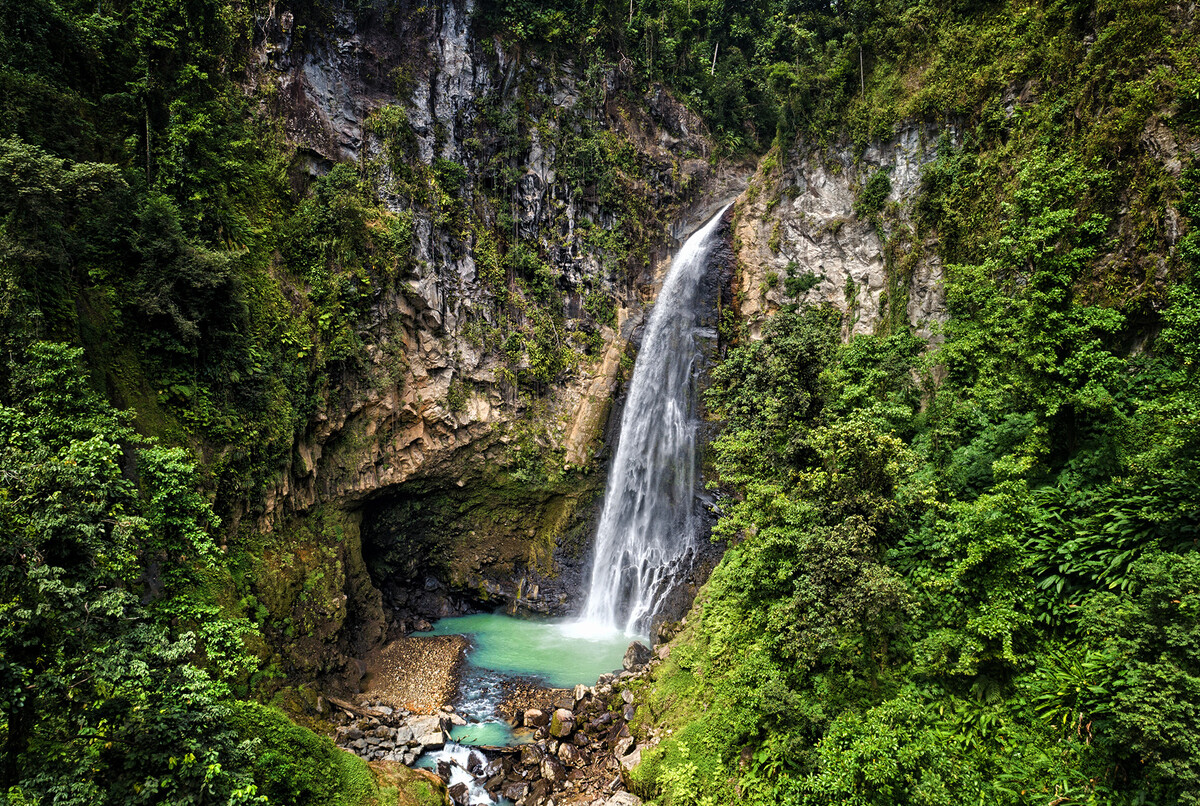 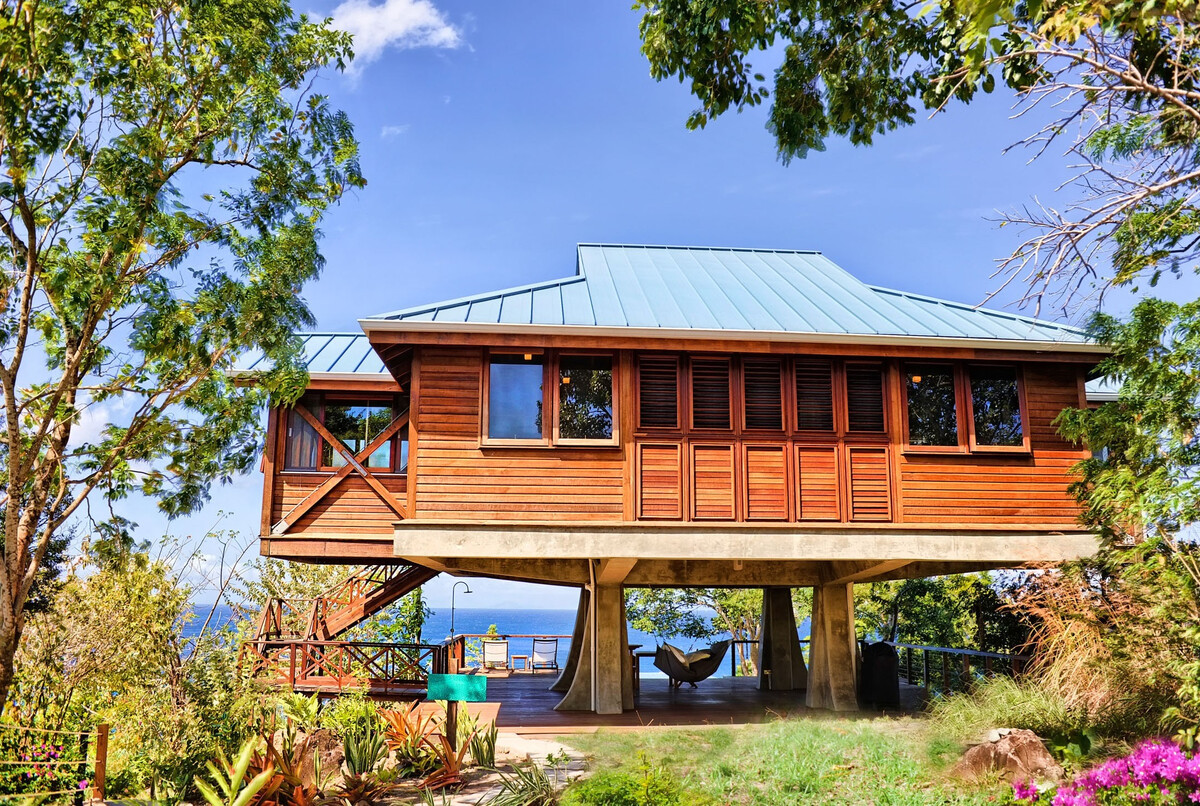 The territory of the Kalinagos, Amerindian populations

The Kalinagos, an indigenous people of the Caribbean, were the first inhabitants to enjoy these hot springs, arriving long before Columbus. Now, they are one of the last pre-Columbian populations in the Caribbean, living in eight villages across the Kalinago Territory on the east side of the island. Secret Bay can arrange a private tour of the Kalinago Barana Auté cultural village to shop for woven straw baskets and other handicraft. Guests can even learn to make cassava bread, a staple in the Kalinago diet, in the traditional way. 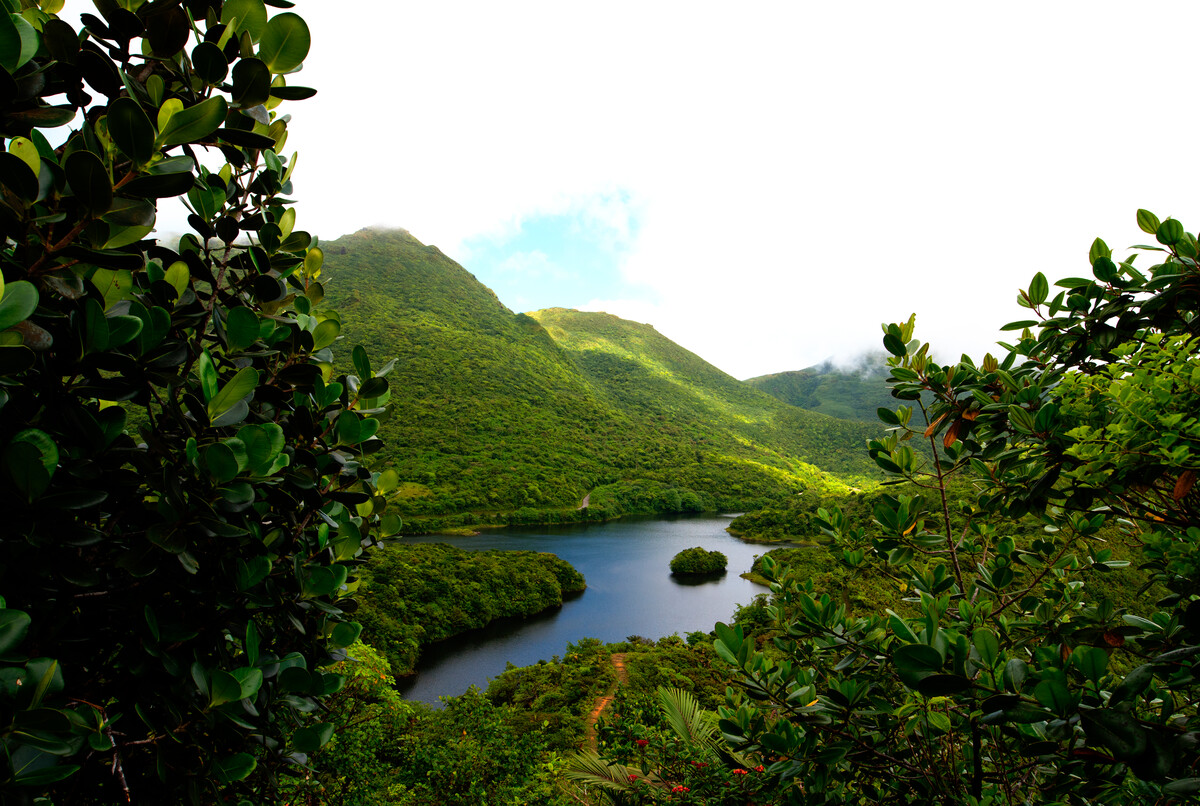 Dominica's biodiversity and exciting topography offer so much to do on land, from ziplining to canyoning into deep gorges, but the island's natural beauty is just as impressive from the water. Sandwiched between the Atlantic Ocean and Caribbean Sea, Dominica's best diving can be found at the southern tip of the island, at Soufrière-Scott's Head Marine Reserve. The fierce crashing waves of the Atlantic on one side and tranquil turquoise Caribbean waters on the other present a strikingly beautiful dichotomy and the submerged volcanic crater is home to flourishing coral reefs bursting with a kaleidoscope of color. You might see barracuda stalking their prey and large schools of tuna and snapper make appearances. Even if you aren't PADI-certified for scuba diving, kayaking through the surrounding sea coves can be equally enjoyable. 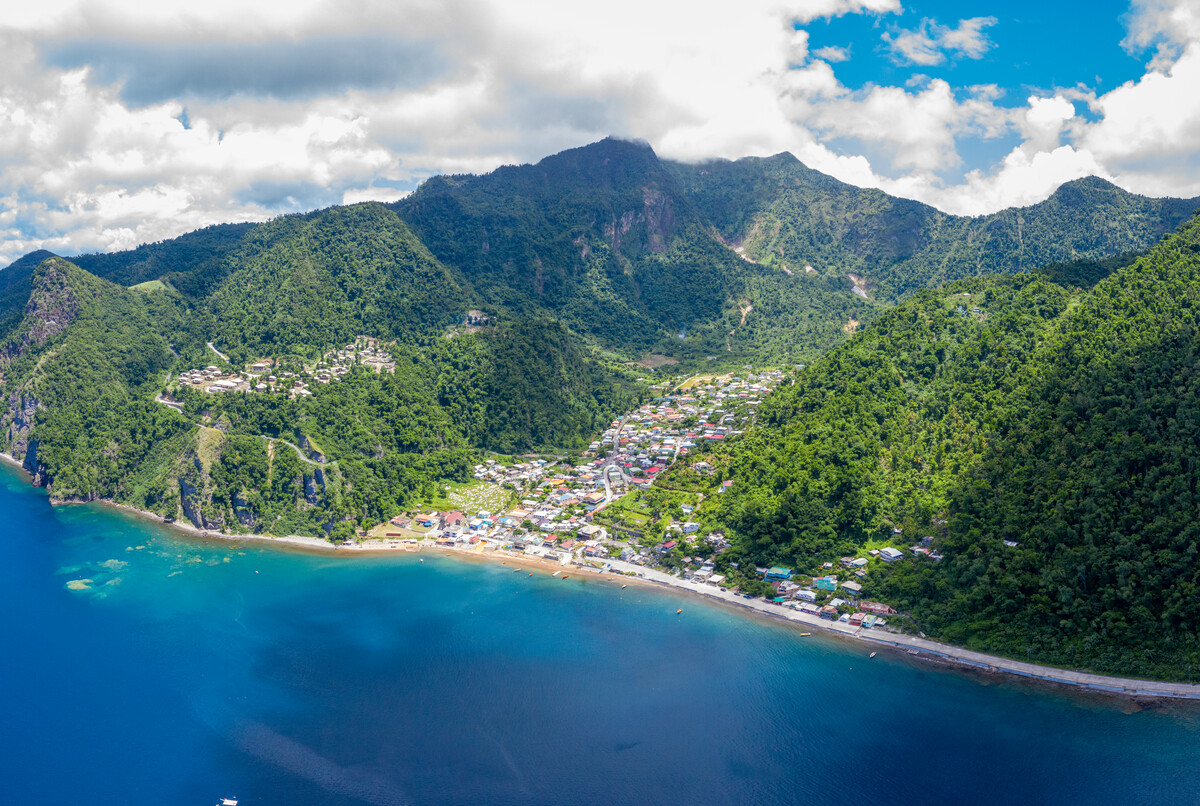 One of the biggest threats to Dominica's delicate coral ecosystem are lionfish, an invasive species with no natural predators that disrupt the endemic population balance. The lionfish population has exploded over the past decade and the Dominican government has begun encouraging locals and visitors alike to hunt these flamboyantly spiky striped nuisances. There's no limit on the number of lionfish you can catch and you don't need a permit. Every January, locals host an annual lionfish spearing competition, and if you want to try freediving and spearfishing with a pole spear yourself, Secret Bay is the perfect spot. 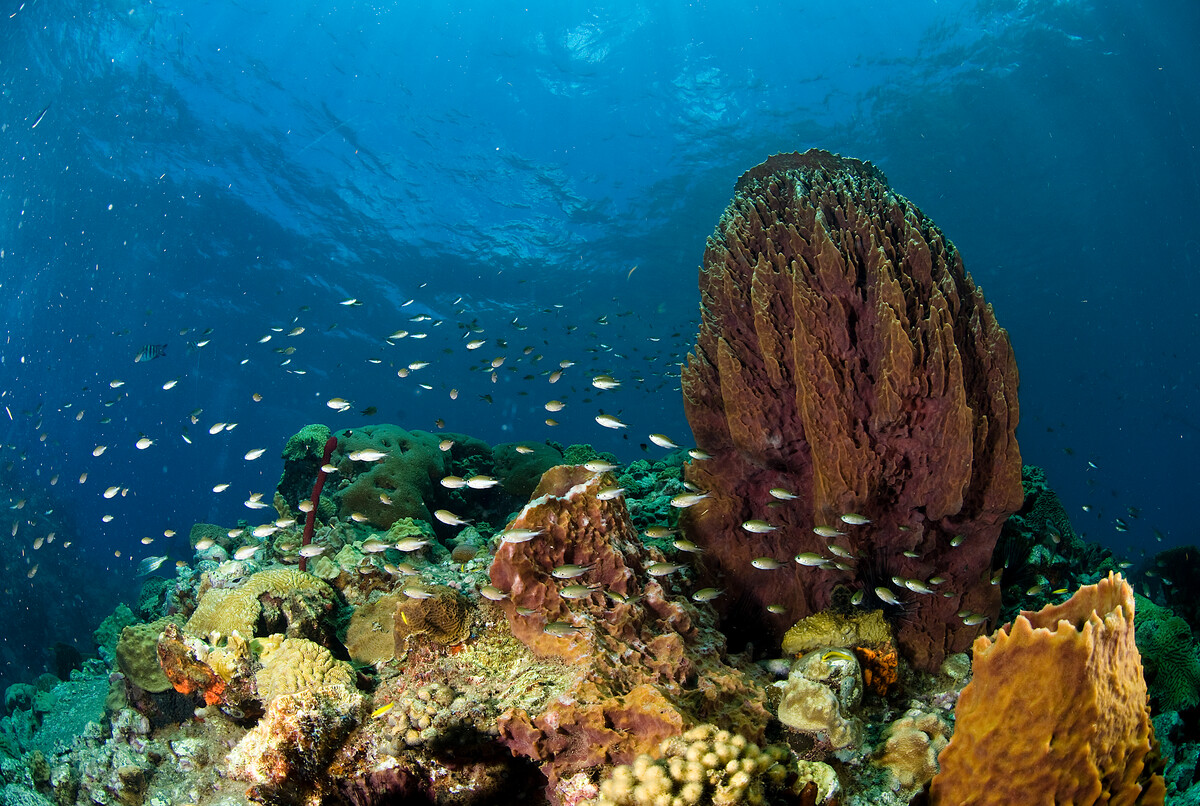 Captain Don Mitchell is one of the most prolific lionfish hunters on island and the friendly fisherman will take you to his “honey hole” where he always finds lionfish lurking. Back at Secret Bay with your catch, Chef Fábio Fernandes, gives private cooking classes to taste thinly sliced lionfish sashimi and grilled fillets garnished with herbs and vegetables from the hotel's own garden. These bony fish don't have much flesh on them, but the meat is tender and mild. Secret Bay guests have caught more than 1,200 fish since the resort's reopening after Hurricane Maria in November 2018, and it's a delicious way to give back in a small effort to preserve the pristine marine habitat.