In which the writer and her canine companion explore The Ivy, the historic Mount Vernon manse that holds some of Maryland's best history – and most outstanding restaurants. Get ready to be surprised.

Hannah is a writer living in New York City. She works for Bloomberg News.

THE HOUSE, IF YOU CAN CALL IT THAT, APPEARS AT THE TOP OF A GENTLE HILL. You see it nestled into the Mount Vernon neighborhood like a red leather-bound book folded smartly into a thick mahogany bookshelf.

Pulling into the valet station and little Piksi, the American Eskimo that could pass for an arctic fox, is greeted like a returning raja: gentlemen in long coats open our doors and escort us from the winter cold through azure hallways filled with exotic palms and mysterious Danish masterpieces. Piksi sniffs the zebra rug and suede tuffetts; my traveling companion comments on the enormous leaded glass windows, carved wainscoting and green marble we pass to the receiving room.

WE’RE OFFERED CHAMPAGNE AS WE ARRIVE, NATURALLY, and hastily make plans for Magdalena the next evening. The beet-studded rolls and horseradish butter, risotto with chanterelles, and a vegetarian tart with pepper and eggplant far surpass what we had anticipated, though it was the breakfast fare (farm fresh eggs and cheddar the color of sunlight, truffled mushrooms, warm dark coffee, lemon ricotta pancakes so fluffy they float) that left the strongest impression. We would have had that fare for every meal, left to our own devices.

“We found ourselves curled up for hours in front of its radiant blaze.”

If we got out of the suite more, that is. As it was, we found ourselves curled up for hours in front of its radiant blaze, alternating between there and the massive white tub between bites of perfectly softened brie and farmer crackers.

THE EXTRA BOTTLE OF RED did nothing to motivate us toward any long-term foray outside. Piksi most often remained lounging on his own plush cushion at the foot of the canopy bed, contemplating the fire from his de-facto throne. 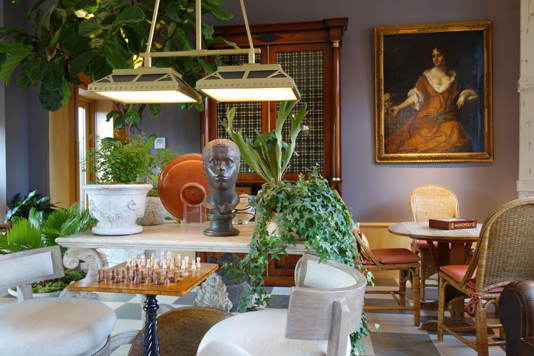 We did venture to the spa (go up the central staircase, walk past the stained glass and skylight, turn left) and made some antiques purchases in town—things that would have looked at home among the 19th-century treasures back at the Ivy. Small wonder: Baltimore is full of overlooked silver bar trays and implements, Persian rugs rubbed to the right patina, vintage tarot cards foretelling auspicious days. The hotel holds such mystical accouterment like a Gilded Age jewelry box. Piksi wasn’t the only one who felt captivated.