Embark on a three-stage road trip from Kerala to Karnataka. First stop: the cosmopolitan Kochi and the historical The Malabar House.

The summer monsoon had reached the Indian subcontinent by the southwest in early June. Kerala was the first state to receive the expected downpour, with the mass of tropical air then flowing towards Goa, Andhra Pradesh, Madhya Pradesh, and finally Rajasthan. The drops of rain seemed so heavy, crashing on the roof of my car as I crossed Kochi on streets lit by yellow lamps that reflected in the puddles turned lakes. But here, the storm is not a sign of despair. By ten in the morning, the rain stops. While the clouds are still very much here, they run across the sky, allowing the umbrellas to rest at the hotel. I am staying at Malabar House, whose name is a nod to the famous coast, a hub of the spice trade since the beginning of time. The hotel reveals itself to be a true reflection of this city I have come to discover — authentic, contemporary, artistic. It is a den of flavours, a haven of care amid a garden of medicinal plants. 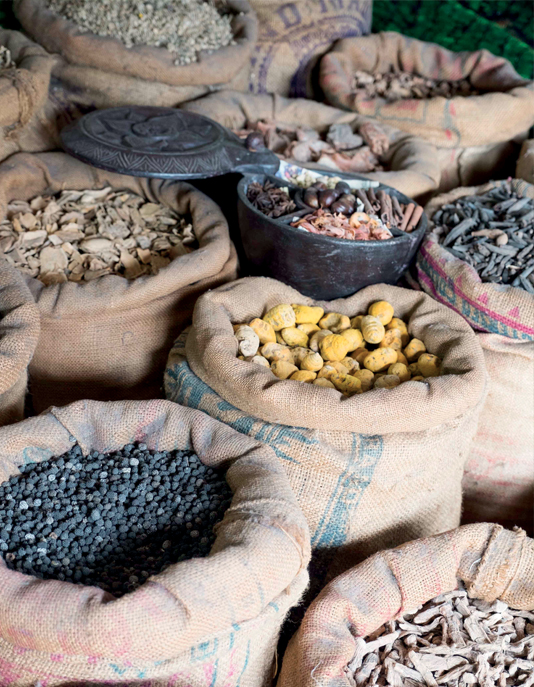 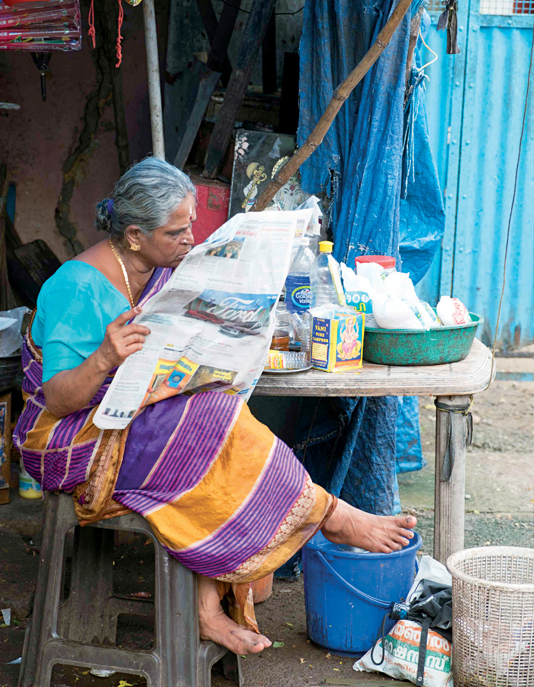 MALABAR HOUSE, A PERFUME OF SPICES
Kochi, formerly known as Cochin, is a city of six islands connected to the mainland. Visits to it are often reduced to Fort Cochin, a well of history in the south of the peninsula, where a handful of roads reflect the successive presence of the Portuguese, the Dutch and the British Crown. The extraordinary ethnic and religious diversity of Kerala is reunited here, more than in any simple symbol. Patrician mansions, like those in Lisbon, stand beside mosques, the oldest church in India and a 16th-century synagogue. I would gladly put myself into one of Corto Maltese’s many adventures, but that proves unnecessary.  In Kochi, fiction has always been eclipsed by reality. Vasco de Gama landed, returned and died on this land, his body buried here before being returned to his homeland of Portugal. In 72 AD, as King Solomon continued his long-standing relationship with Kerala, a Jewish community, who had been driven out by Emperor Titus after the destruction of the Second Temple, followed the trade routes from the Middle East to here in India. They would be welcomed as brothers along the Malabar coast.

The extraordinary ethnic and religious diversity of Kerala is reunited here 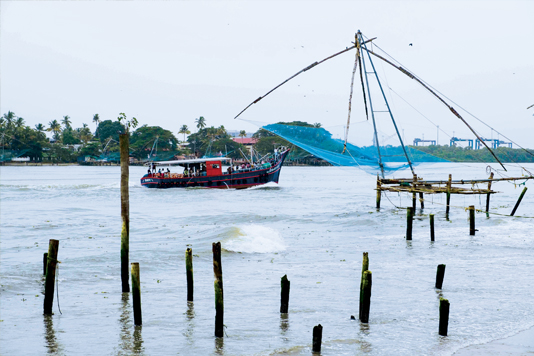 At the same time, Saint Thomas would land in Kerala, and this is where India’s Christianity finds its origins. Even today, you can still find some Orthodox Syrians who continue to speak Aramaic, the language spoken by Jesus and one that can now only be understood by a few polyglot scholars. Joerg Drechsel, who created Malabar House with his wife, has been walking through these
neighbourhoods for over 20 years now and seems to know all of their secrets. He is my guide, my encyclopedia of the city. From Fort Cochin, we head to the neighbourhood of Mattancherry, where I find myself surrounded by a world of spices inside the boutiques near the synagogue. Continuing on, I stumble across the old stalls where bales of tea are transported on the backs of men from a barge sitting on a tiny canal to the back of a warehouse. A worker explains to me how the tea is tasted; how in small metal boxes, samples are sent to wholesalers. And how then, the ritual of the auction begins — by phone, via the Internet. Joerg walks every morning through this street. He can tell the time based on the heights of the bananas stocks, which begin to be sold when dawn breaks. He guides me towards antique warehouses the likes of which I have never seen before on any of my many travels. Thousands of square metres are stacked with armoires and columns; extraordinary chests, benches and four- poster beds coming from the palaces of Rajasthan; and Tamil Nadu sculptures and ornaments from Darjeeling. Moving on, I discover one, then two, three contemporary art galleries. Kochi has twelve in total. “The greatest Indian artists of the moment come to Kerala. It’s not simply chance that has made Kochi’s biennale of contemporary art an international success,” says Joerg. This area we are in is Christian, farther on there are Muslims, and beyond them are Hindus, Jews and others of various ethnicities and religious practices whose names I’m unfamiliar with — some from afar, some from here. Could Kochi be the cradle of humanity? 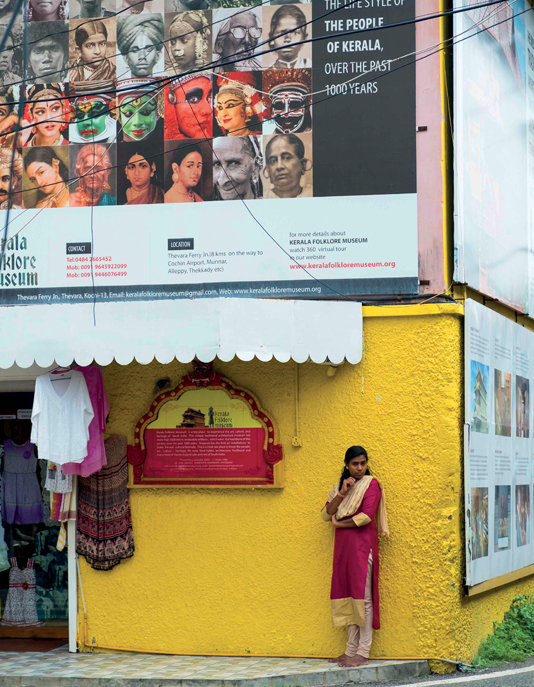 Last night, at Malabar House, I left my body in the hands of two warrior masseurs. For an hour I was massaged from head to toe. It was deep, vigorous — it left me feeling alive, as if I had been reborn. It is now seven in the morning. I watch as children, all dressed up and heading to schools bearing names of saints, play in puddles and with footballs like a flock of chickadees. Their mothers come and go, a ballet of colourful saris — brilliant blue, blood red, burnt orange. 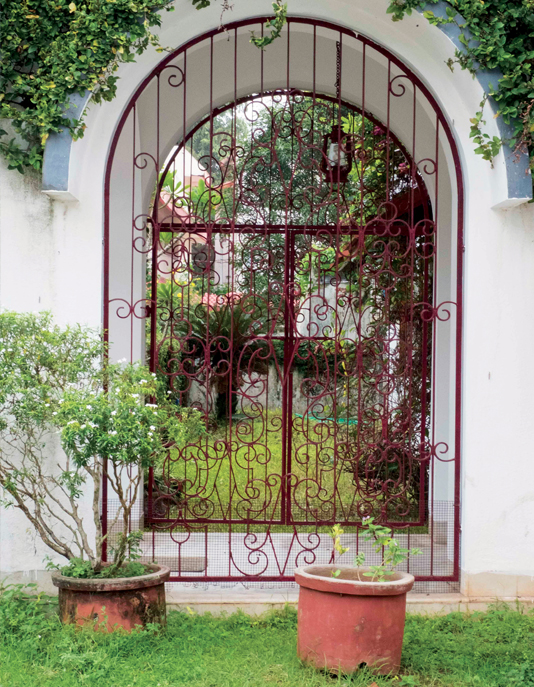 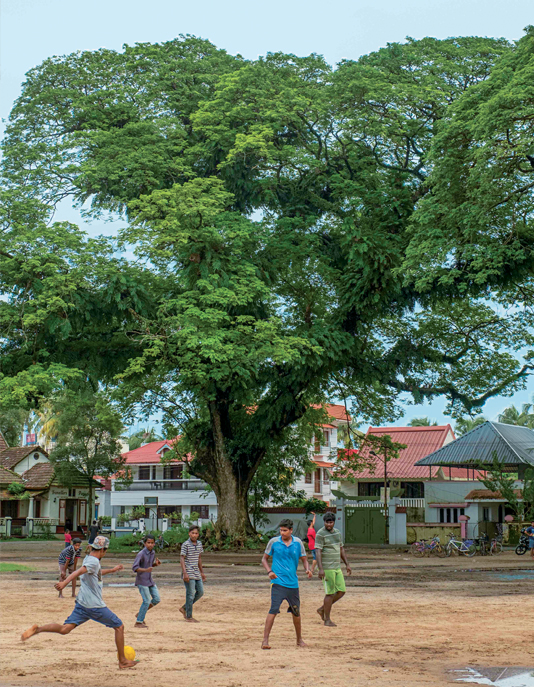 Next: Muhamma Purity, second stopover along the waterway