Discover the last two days of the journey under the themes of relaxation and well-being, between the lush nature and fauna of Thiruvananthapuram at the edge of the ocean and one of the high points of world yoga in Bangalore.

NIRAAMAYA RETREATS: ZEN IN ITS PUREST FORMI head off again by car. But this time, it is four hours during which I keep my eyes half closed. I can just barely see, and not without apprehension, the surreal life of India’s roads. Two lanes become four depending on the goodwill of drivers, one-way roads appear to exist only on street signs, and all of this happens in shocking fluidity, where trucks, rickshaws, motorcycles and carriages, private cars and fully loaded buses weave in and out, dodging each other in ways that seem unfathomable. I only open my eyes completely when I arrive at my destination, Niraamaya Retreats Surya Samudra. I’m welcomed by an extraordinary garden populated with Hindu sculptures and traditional houses set amid Kerala’s lush jungles. The whole property sits on a cliff that descends down a gentle slope towards the thundering ocean. The waves rise higher than men, at least two times as high. The black and brown sea eagles, with their white heads, play in the winds, soaring and diving, then retreating to the coconut palms to rest. My room is a house, a house like a boat cradled by the furious surf. Several dozen metres below, there is space set with columns, where, facing the sea, yoga is practised. It is easy to see why this exceptional hotel is so appealing. 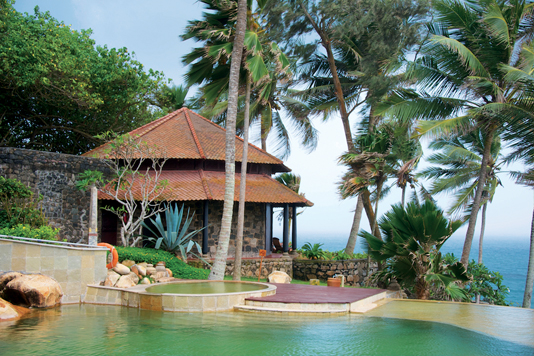 At Niraamaya Retreats, travellers can rediscover their deep inner selves while basking in luxurious nature. The spa calls to me. Oil flows steadily and without interruption onto my forehead. The massage follows. It is quick, complete, from head to toe — a deep massage that reaches into the depths of my muscular tissue. Afterwards the oil beings to flow again. It lasts thirty minutes, but to me it seems as if time has come to a standstill. Did I fall asleep? Was I wandering between two worlds? What an incredible experience of relaxation! Here too, and perhaps even more, the harmony created between the wonderful benefits of the cuisine, yoga and therapeutic massages embody the essence of Ayurveda, this traditional medicine that is more than 5,000 years old.

I spent only one night, but I would have liked to devote a week or more. 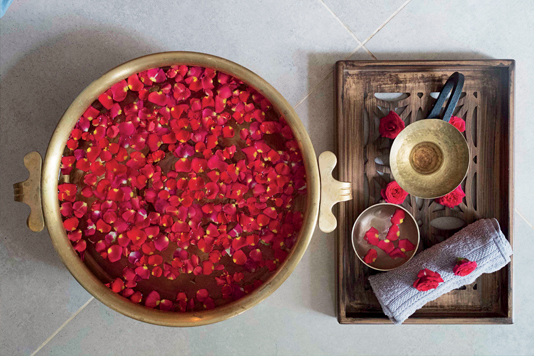 SHREYAS RETREAT, A TEMPLE TO YOGA

How can I possibly leave Kerala, this place of ultimate well-being, and return to confront the violence of city life? The answer seems to begin with a one- hour flight to the world’s high-tech capital of Bangalore, in the neighbouring state of Karnataka. At Shreyas Retreat, it is the sound of silence that prevails, barely disturbed by the winds rustling through the bamboo. The history of this place is born from a man — an Indian financier based in Tokyo, who has practised yoga since a very young age. Tired of the stress tied to the volatility of the stock market, he decided to find new meaning in his life. That was twenty years ago. To the rusticity of the ashrams he frequented, he wished to add simple yet essential luxury. This is what has made Shreyas Retreat one of the world’s greatest temples to yoga. In a 25-hectare garden that produces all of the vegetarian cuisine, guests (25 maximum) practise beside the 70 people that work on the property during two daily yoga sessions. 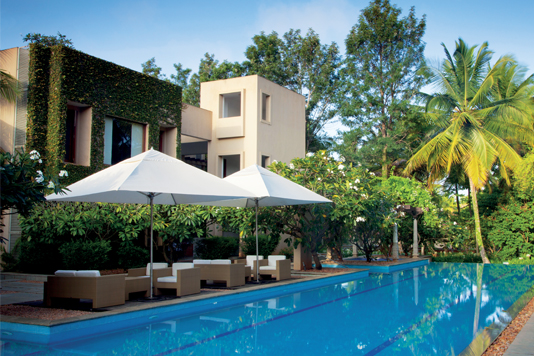 A spa has also recently sprung up, which has become very much the delight of interior design magazines. The treatments provided here, together with the naturopathy, yoga practise and meditation, will frustrate any traveller in a rush. I spent only one night, but I would have liked to devote a week or more. On the return plane home, I delightfully plunge into Herman Hesse’s Siddhartha. His grandfather was from around here — Kochi, Kerala to be exact. 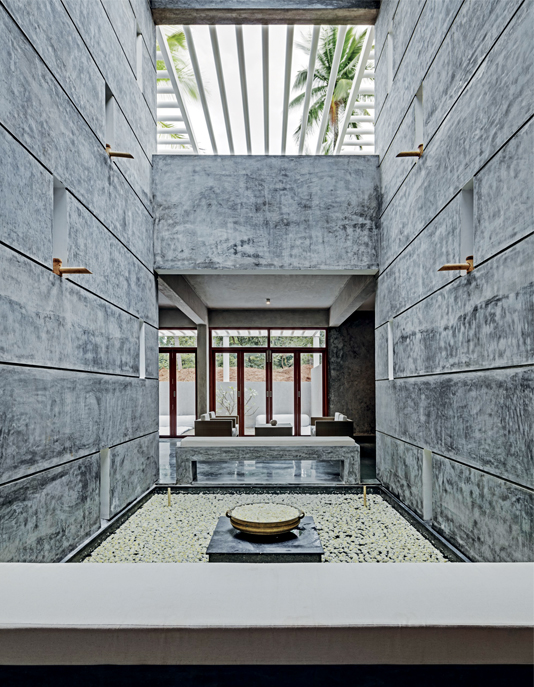