From colorful herbaceous borders to world-class vegetable patches and sweet-scented roses, there is something uniquely special about English gardens and historic country estates. Here are some of the most spectacular, where the contemporary design of the planting also nods to the past.

Emma Love is a London-based freelance journalist specialising in travel and design and writes for publications such as House & Garden magazine, the Guardian, Country & Townhouse and Sleeper. She is also a Contributing Editor at Conde Nast Traveller UK and Elle Decoration UK.

The formal areas encompass the pretty Walled Garden (it’s planted with the palest pink peonies, Japanese maples, irises and hydrangeas, and houses the 18th-century Dovecote); the tranquil Rose Garden with 360 roses arranged in a design reminiscent of a French courtyard; a circular Lavender Garden; and the Kitchen Garden, which provides micro-herbs and vegetables to the hotel’s fine dining Michelin-starred Restaurant Hywel Jones and casual brasserie. “I always say that coming here is a re-boot of everything that’s natural,” continues Andrew. “Lucknam Park is quite a romantic estate because when guests are here they don’t have to do anything. They can simply spend time together, enjoying the outdoors.”

« I’ve been gardening for more than 40 years, and I can honestly say that I’ve loved every minute of it. My aim is to create the best gardens that I can without making them look too perfect. I like a splash of colour in the herbaceous borders, and I love roses; at Lucknam Park we have climbing Rambling Rectors that look deliberately informal growing at the end of an avenue of hornbeams and on the Dovecote.”

Whatley Manor, the conception of the gardens in 26 spaces

After a deep slumber, the next morning I drive half an hour along winding country roads to Whatley Manor, arriving just in time to join a summer tour of the hotel’s 12-acre gardens with head gardener Andy Spreadbury. Originally a farmhouse that was rebuilt in the 18th century, the Grade II-listed manor was extended in the 1920s by its Canadian owner and became a hotel in 2003. The gardens were designed by Elizabeth Richardson according to the original 1920s plans and divided into 26 areas. We head down to the River Avon. Curious cows appear on the other side of the bank and a swan glides serenely past. The only sound is birdsong.

“It’s hard to see where the garden stops and the countryside starts and that’s intentional.” continues Andy. It’s something that becomes more apparent as we climb higher, above the grand lawn with its shrub border of echinacea, Buddleja alternifolia and geraniums, to the Herbaceous Garden where the rolling hills behind are perfectly framed by fir trees. This garden, full of pretty foxtail lilies, Michaelmas daisies and cranberry Augusta folia, leads to the Hot Garden, where Andy tells us, Velvet Queen and Russian Giant sunflowers are soon to appear.

There’s also the Loggia with a sculpture by Simon Allison; the Rose Garden which was planted in 2017; and the Kitchen Garden where blackberries grow against the wall, and tables for breakfast are dotted among the cabbages, beetroot and artichokes growing on homemade frames. Michelin-starred chef Niall Keating (he was also named Michelin’s Young European Chef of the Year 2018) and his team pick produce to use on the menu. 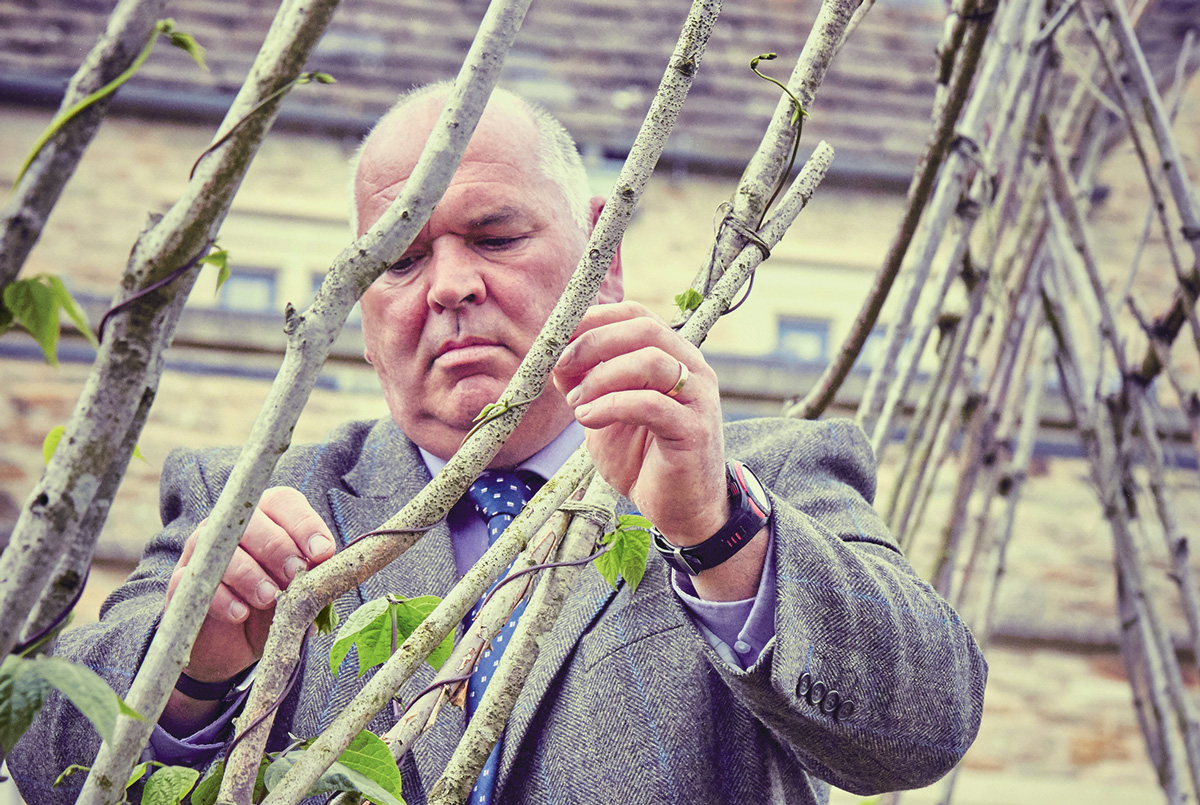 « My favourite garden at Whatley has to be the new Rose Garden. We dug out 50 tonnes of soil and put 30 tonnes of fresh soil backin before planting 320 new roses. We wanted colour and fragrance, so chose, among others, the David Austin Darcey Bussell and David Austin Princess Anne. It’s such a lovely spot to come and sit with a drink in the evenings. »

My next stop is Buckland Manor, an hours’ drive away in the heart of the Cotswolds. It’s a 13th-century honey-hued manor house set on ten acres of land with a path to the left that leads to the village church. Outside, I climb to the top of the meadow — which is planted with drifts of sunny daffodils in spring — to look down at the gardens below. Nearest to the hotel’s back terrace, the herb and edible flower border meets a formal edge lined with cone-shaped box hedges. Along one length of the lawn there is the White Walk, nicknamed because of the white and silver color scheme achieved with Magnolia stellata and Himalayan birch. “When I started here four years ago, the gardens were mostly full of brightly colored bedding plants which didn’t suit the medieval mansion house at all,” recalls head gardener Mike Dron. “I was brought in to introduce more permanent planting; to create beds that have structure and order, but also a cottage garden-style informality to them in places as well.”

This is evident in the Fountain Garden at the side of the hotel, now full of lilac foxgloves and lavender, Chinese plume poppies and deep red Munstead Wood roses, and in a new feature flower bed in front of the tennis court which has been filled with ornamental hawthorns and mountain ash trees, and under planted with viburnum, Euonymus alatus plus the odd wildflower. A new avenue of apple trees lines a path to an old cider press, tying in with the cherry trees along the drive; and at the front of the house, there is a beautiful wrought-iron gazebo surrounded by dahlias and jasmine around the front door. 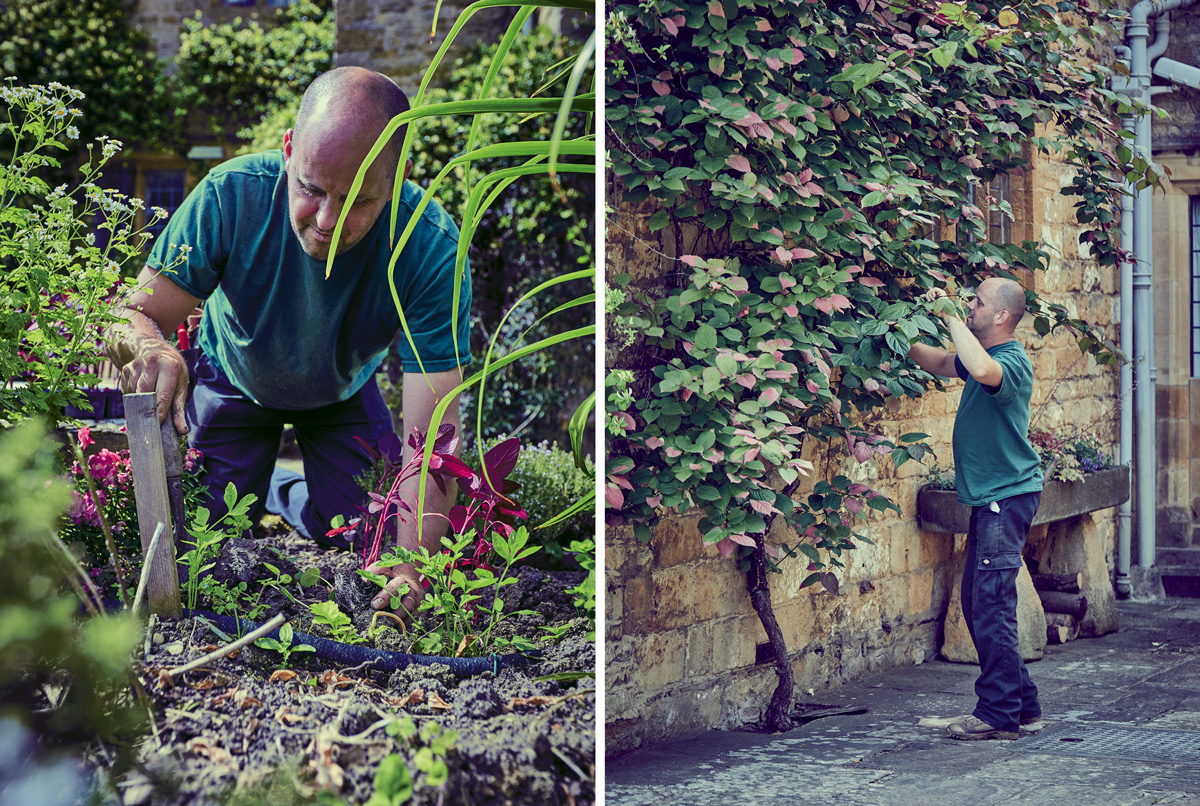 « There is a Japanese Katsuru tree, also known as a candyfloss tree, up on the hill. It has bright yellow leaves which, as they drop off in autumn, give off a smell like toffee apples. It’s a wonderful thing. »

I leave the tranquility of Buckland Manor behind and just under two hours’ later find myself approaching Cliveden House. The rich 350-year history of the house can be seen inside and out, from the vast tapestries and suits of 18th-century steel armor in the lobby and dazzling French dining room with gilded rococo panelling to the formal gardens which sit within 376 acres of National Trust parkland. Perhaps one of the best things about staying here is the fact that once it closes to the public, hotel guests have the gardens all to themselves. Walking around with head gardener Andrew Mudge (now retired), what strikes me about the gardens is how each section has been designed with a nod to the past. A conservation management plan is in place; so before any significant changes are made, research is carried out into what would have been planted previously and there is a discussion about how to reflect that now.

The centerpiece of the Edwardian Oriental Water Garden is the six-sided Chinese pagoda, originally made for the 1867 Paris Exposition Universelle, which was brought here by Lord Astor. Today, it is surrounded with natural plantings of irises and hostas, and positioned near to the maze, which was restored to its original design in 2011. The Long Garden, planted with salvia Vistas, still has a pair of baboon stone statues from Lord Astor’s sculpture collection on display and peacockshaped topiary; while the breathtaking Rose Garden (once a formal grassed area) is based on an original 1950s design by garden designer Sir Geoffrey Jellicoe. “Geoffrey wanted to create a wave of colour, so the garden starts at sunrise with pale yellow roses, then goes into bright oranges and pinks before fading out at sunset on the opposite side,” explains Andrew.

There’s also the Duke’s Garden, where former owner 19th-century Duchess of Sutherland’s monogram can be seen in carpet bedding (John Fleming, her pioneering head gardener was the first to ever come up with the concept of carpet bedding). Before dinner, I hop on one of the hotel’s beautifully restored vintage boats for a jaunt down the river, past silver willow and elderflower trees, and Spring Cottage, where Queen Victoria used to stop off along the river from Windsor for afternoon tea with the duchess. 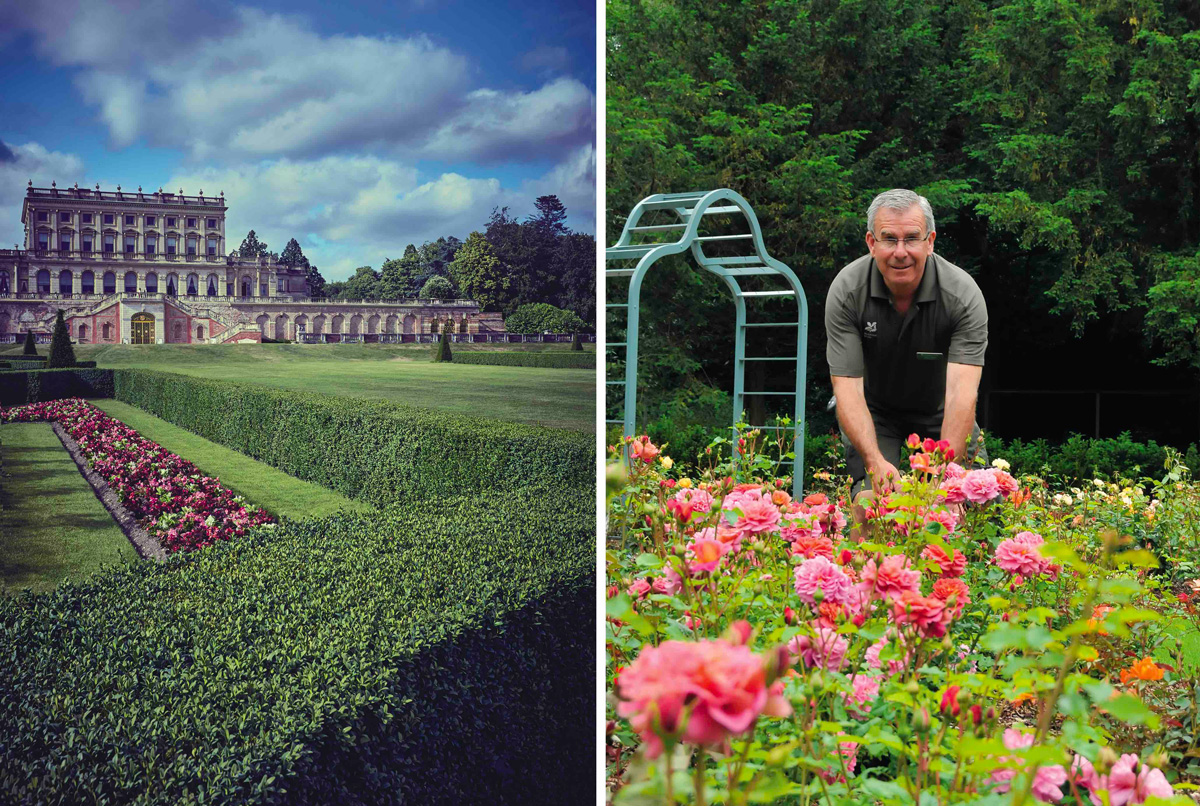 « Everyone tends to collect around the honeypot areas where the gardens are colourful and vibrant; but if I was to come to Cliveden and have a picnic, I would head to the Ilex Grove which is usually deserted. I love the creative side of being a gardener, designing the borders and the colour schemes. There’s a sense of satisfaction when everything looks as you’d planned it in your mind. And most importantly, there’s seeing the absolute pleasure that the gardens give to our visitors. »

On the last day of my road trip, I head south to the Grade II-listed, 16th-century country house hotel Gravetye Manor, where everything from the bedrooms named after trees to the plant-inspired signature cocktails served in the bar links back to the 35-acre gardens (the larger estate is 1,000 acres and managed by the Forestry Commission). Nowhere is this more obvious than in the spectacular new-look Michelin-starred restaurant, which opened in spring 2018 (chef George Blogg heads up the kitchen). Hand-painted wall panels by French artist Claire Basler depict a botanical walk through the seasons and front floor-to-ceiling windows face the Flower Garden.

The gardens were designed in 1885 by the owner of the manor William Robinson, a gardener and journalist who also pioneered the idea of the wild garden at a time when clipped, formal planting was still very much in favor. It seems appropriate then, to start my stroll at the top of the Wildflower Meadow looking down over the man-made water lily-filled lake at the bottom (William’s looser style is said to have influenced Claude Monet’s Giverny garden and the Nymphia ‘Robinsoniana’ water lily is named after him). “William’s ethos was that you can only appreciate a natural landscape if there are also contrasting areas of formality,” explains head gardener Tom Coward, who manages the garden in homage to the designer while at the same time moving it forward creatively.

At almost two acres, the elliptical Kitchen Garden is equally impressive and home to all manner of fruit and vegetables and flowers, which the florist cuts and arranges throughout the hotel. There are also 85 varieties of apples growing in the orchard, hens for eggs, and a peach house started by William Robinson and restored several years ago where the first crop of early Amsden June peaches are almost ripe. Heading back down via the croquet lawn and a bank of azaleas, I arrive at Little Garden where hotel guests can sit for breakfast or lunch. With a front-row seat in the restaurant, I tuck into fillet of haddock with chive risotto and poached mussels, followed by lemon verbena posset, garden-grown strawberries and zingy elderflower sorbet. The view in front of me, all Sublime Lilac larkspur, Magenta Star dahlias, Ladybird poppies and Blue Boy cornflowers, is spectacular. 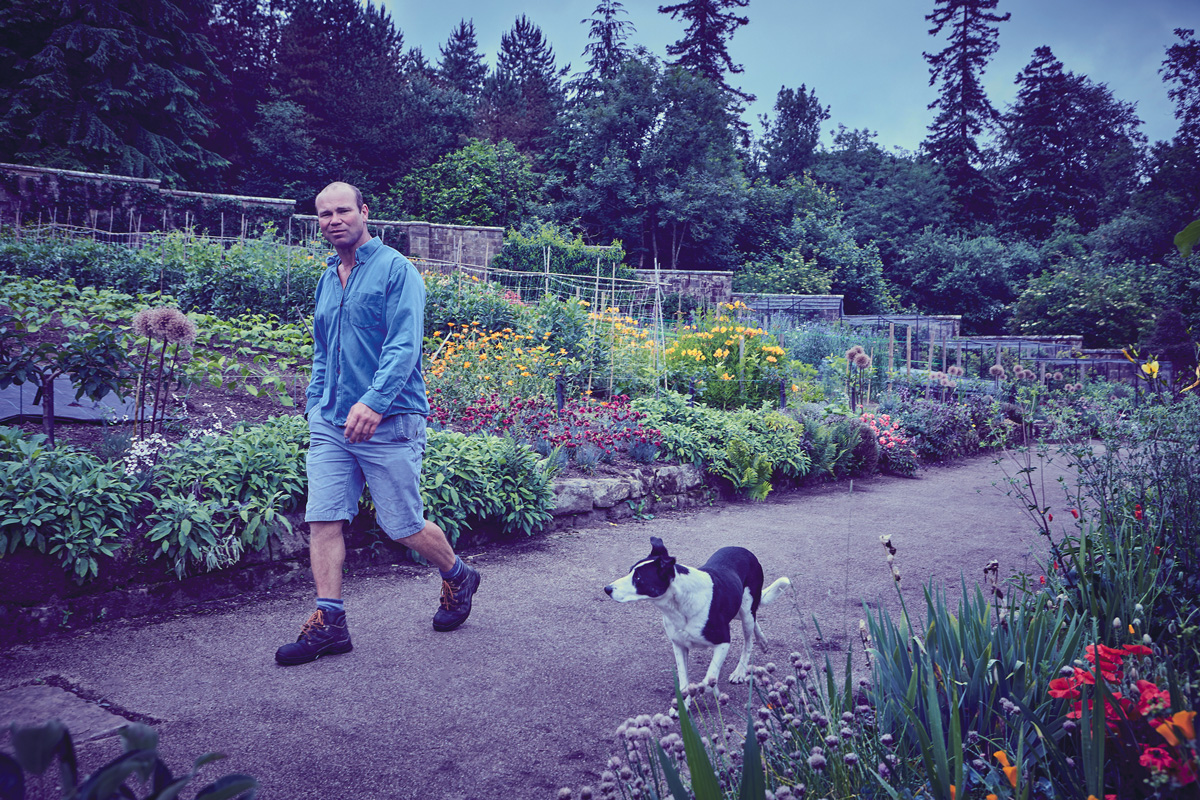 « Head chef George Blogg leads what is grown in the kitchen garden. Sometimes the results of our decisions are not realised for years; in the case of asparagus, you don’t harvest the first crop for at least three years after planting. We are always planning further ahead than most people realise and then have to wait patiently to see how it grows. It is an honour to work in this garden, to reclaim it for its original purpose. »