A land of legends, softness, and light, England’s southern coast is ruled by its epic gales. Islands, estuaries, forests: author Nicolas d'Estienne d'Orves and photographer Anne-Claire Héraud the many contrasts there are for discovering this crucible of British civilization.

French self-taught food and lifestyle photographer Anne-Claire Héraud seeks out local actors committed to sustainability and authenticity. She thinks of food as the gateway into exploring a new culture. “Food reflects the spirit and identity of a place and is always a pleasure to share with good company.”

Author and Figaro columnist, Nicolas d’Estienne d’Orves has displayed mastery of a wide range of literary genres. His passion for travelling stems from a desire to “rediscover the virginity of the gaze: lingering on the details, being surprised by the unassuming, being amazed by the invisible.”

But first, the sea. Impossible to miss. Blue, deep, intoxicating. Then, like a surprise, this island: Jersey. No sooner do we hop off the plane than here we are at this lovely manor house, nestled in a small valley above the sea: Longueville Manor.

We are immediately offered a Septante cocktail, a celebration of the hotel’s 70th anniversary. It blends champagne with a gin made from rhubarb picked in the property’s garden and distilled by the owner’s nephew.

Malcolm Lewis’ family has owned Longueville Manor since the early days after the war. “The local archives say the original building was built in 1366, but it’s likely much older.”

Here, each of the 30 rooms has its own identity. Take this one with colonial charm, beige and brown tones, a four-poster bed, and paintings of wild animals. You would think we were in the bush were it not for the view from the window: an explosion of flowers, trees, grass, and a clearing tunneling its way into the forest, as if leading us into a fairytale. 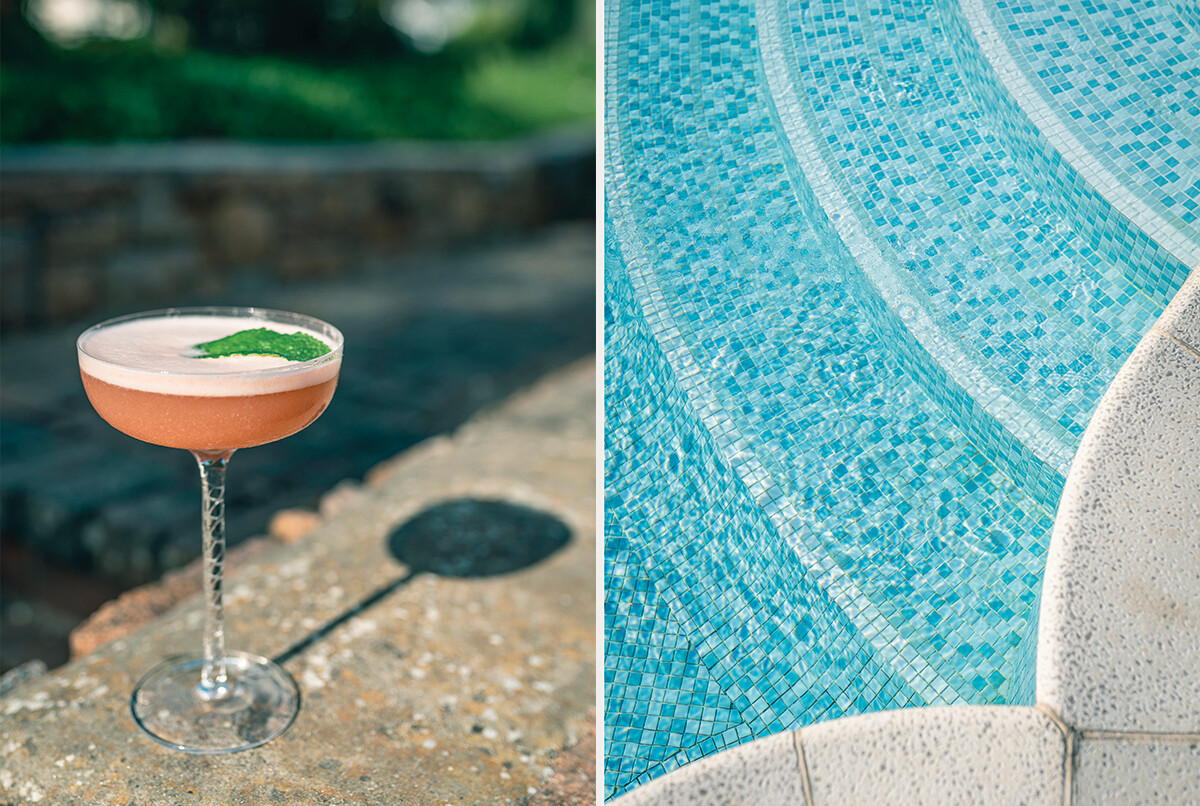 The inhabitants of these verdant grounds? Owls, squirrels, small eagles, and even waterhens bobbing in the pond, shooting wrathful gazes anytime walkers approach. At Longueville Manor, a walk in the woods is a must, for it is there we discover a botanical paradise. A grass tennis court surrounded by fruit trees.

Further on, an herb patch reminiscent of the medieval vegetable gardens so dear to the alchemists of old. And the island’s specialty, the Jersey Royal, a potato grown in sand mixed with dried seaweed, an extra touch that gives these vegetables their inimitable marine flavor. 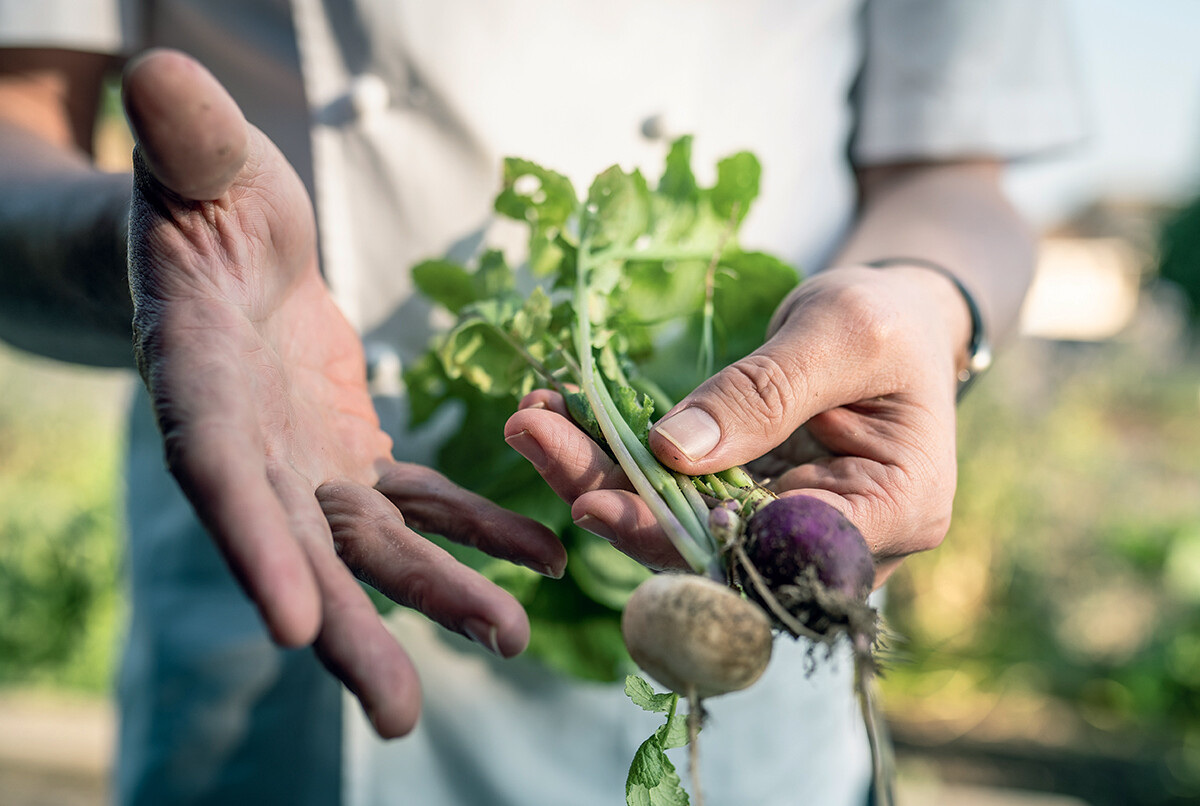 In his delicious restaurant, Chef Andrew Baird proudly serves produce from the garden and much of the menu is devoted to the sea. Take, for instance, these scallops that a fisherman gathers by hand on daily dives. Oh, how lovely it would be to stay and sip this Jersey white wine that goes so well with oysters as fresh as a foamy kiss; but we are off to explore the Hampshire coast…

In this magnificent region of Hampshire, the countryside possesses an exhilarating beauty. The contrast between the bright blue sky and the gentle green nature is as striking as it is pictorial. On either side of the paths meandering from forest to hedgerow, you can spot New Forest ponies. And here we are at Chewton Glen. More than 160 acres, a nine-hole golf course, croquet lawns, and woodland as far as the eye can see.

It would all seem daunting were it not for the charm of this Georgian manor house and its Victorian flourishes on the ridge of a verdant valley that kisses the sky, where we can sense the sea’s presence in the distance. Vermilion bricks call to the azure expanse above, enchanting wisteria converses with rose bushes. The rooms dazzle with luminosity, sash windows all around, and the suites have a cozy charm with adjoining sitting rooms.

It’s hard to imagine that, in the early 1970s, this hotel (established in 1962) was a modest building with only a few bedrooms and two private bathrooms. But its owner had the brilliant idea of turning it into Great Britain’s first country spa. It was this flash of intuition that allowed Chewton Glen to grow. Today, the spa is as spectacular as ever, with colonnaded pools, painted ceilings, and Jacuzzis.

But for a change of scenery, try one of the fourteen Treehouses. Real cabins perched on stilts and planted in nature, these rooms let you sleep deep in the forest in surprising comfort that blends seamlessly with the luxuriant vegetation. They are like botanical lighthouses shining over the canopy of trees, where you lose all touch with reality. Imagine an exhilarating impression of weightlessness, leaving the world of humans to become a fern. 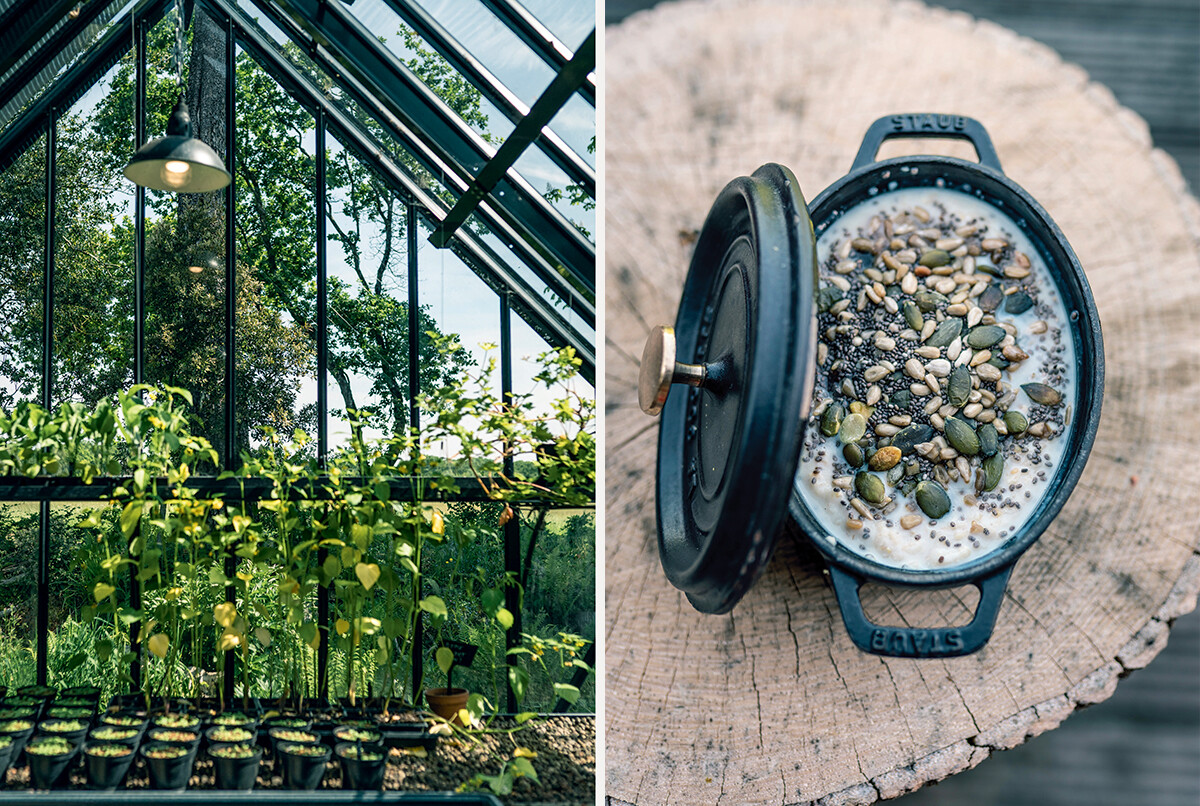 But let’s not forget our appetites and head to the restaurant to taste the famous cheese soufflé (a delicious specialty for the last 40 years!), as well as the beautifully aged meats, washed down with a lovely Sardinian wine that the sommelier finds especially for you. It is after savoring that last rhubarb-ginger sorbet, returning to the Treehouse, and spending an hour in the hot tub on the terrace under the Big Dipper that you begin to muse on the eternal nature of nature.

From Hampshire to Devon are coastlines, bushy hedges, and dense forests with the sun setting ablaze the young, plump leaves. Like a lookout atop an oppidum, Lympstone Manor dominates an estuary with the serenity of an ancestral home. Built by the famous Baring banker family in the 17th century, Lympstone Manor later fell into disrepair. It would take the determination of native son Chef Michael Caines to restore this beautiful sleeping beauty to her youthful splendor. In April 2017, this realm of good living and well-being opened.

"We are in the dreamworld of a chef who became lord of the manor."

Birds are Lympstone’s hallmark. On the stairs to the first floor, a wall fresco depicts all the winged fauna of Devon. Each bird then finds its place as emblem of one of the 21 rooms: heron, kingfisher, egret, seagull.

We are in the dreamworld of a chef who became lord of the manor and wishes to share his passions with us. Topping the list is wine: Beyond a superb cellar and wine-tasting room, half the hill below the hotel has been planted with Champagne grape varietals. 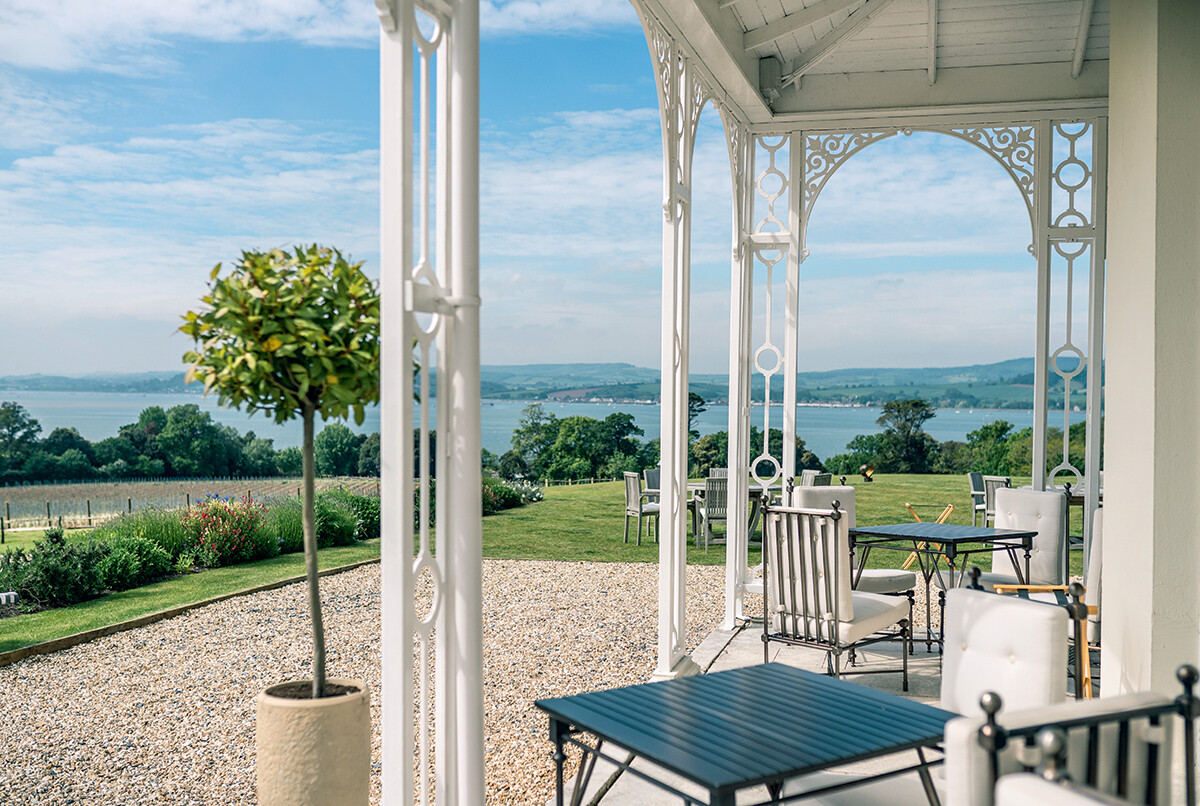 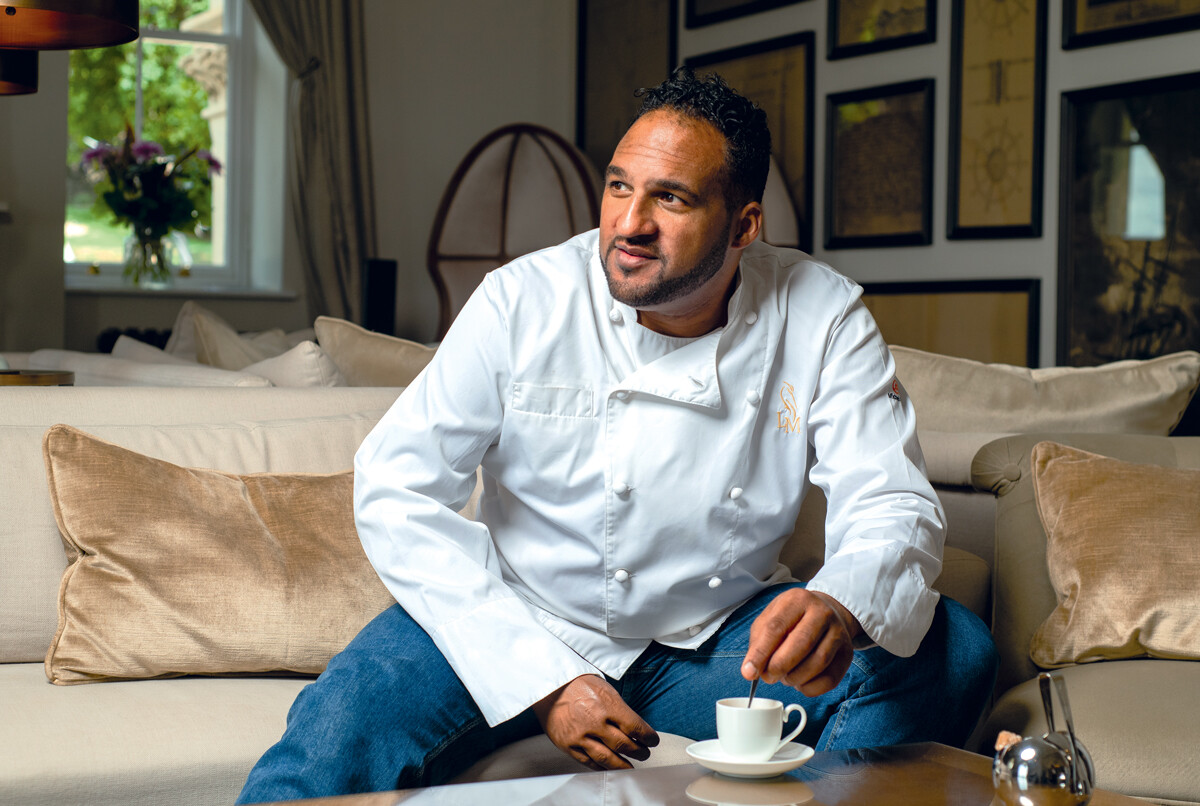 A stroll around the vineyards, along the Ladies’ Walk, by charming bucolic ponds and pretty hives nestled in ferns, is also the chance to admire the many statues gracing the grounds, all thoughtfully chosen and placed. But, like the charms of the cuisine, they celebrate an ephemeral magic: They are only visiting, as Lympstone Manor is also an art gallery.

Let’s now go deeper into Devon, this land teeming with little roads lined with multicolored hedges and rugged walls. We are heading into the magnificent Dartmoor National Park. 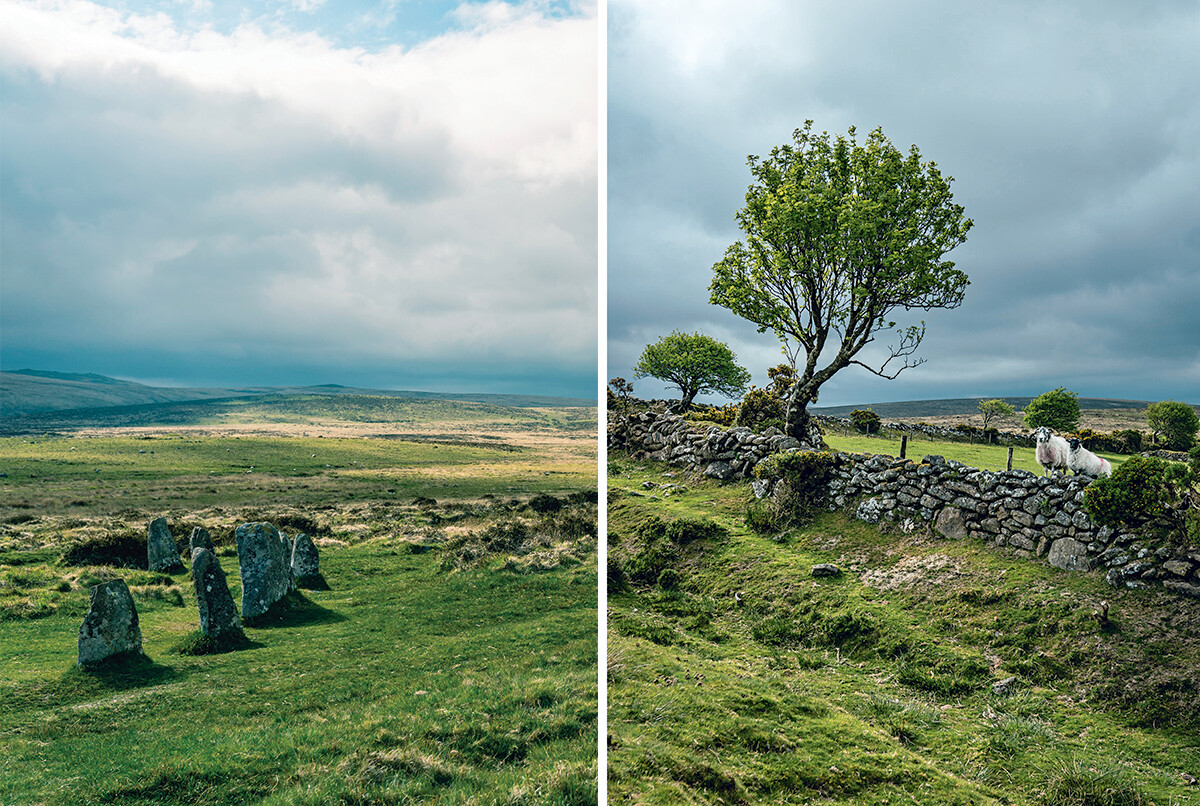 In the heart of this labyrinth of greenery, Gidleigh Park is a refined stopover that is sure to seduce mystery-lovers. When you venture into its park of twisted trees, you will think you are in an enchanted garden. Is there not a pagan deity hiding among these mossy rocks and ponds?

Yet there is nothing medieval about the main building, with its beautiful Tudor-style half-timbering. Originally the country residence of the lords of Gidleigh, the house was bought in 1977 by two Americans, who turned it into a hotel. Gidleigh Park quickly became one of England’s most popular gastronomic stopovers. Since 2006, it has been the property of the Brownsword family, preserving its charm and traditions.

For tradition seems to be the watchword at Gidleigh Park, with its 125 acres and 23 rooms. You feel as if you have been invited by a distinguished British family to stay for a long weekend. Dark wooden staircases adorned with paintings of ancestors and hunting scenes above soft, plush carpets conjure the charms of the Belle Époque. Here, everything beckons you to rest, curled up under a blanket by a crackling fire, riveted by some detective novel, your eyelids becoming deliciously heavy.

The Ocean at the Foot of Your Bed

As you reach the extreme west of the country and the legendary coasts of Cornwall, the moor returns, reminiscent of Scotland or Ireland. Then the landscape changes again: palm trees, conifers, and gigantic purple laurel bushes bordering roads narrower than alleys. Finally, the branches part to reveal an exquisite little port beside a cliff: St Mawes.

Here, the sea penetrates the land in subtle arabesques. On the water, sailboats, pleasure boats, and a few trawlers laze about. Small ferries go here and there — the best way to connect the different ports of the Roseland Peninsula. This is where we discover the lovely white façade of The Idle Rocks, whose walls are lightheartedly licked by the rising tide.

In the beginning, there was a bakery attached to a harbor master’s office. Together, they became a hotel at the dawn of the 20th century and have remained so ever since. You can taste the true pleasure of the sea from these bright rooms with their broad stripes, soft tones, blues and creams. And then there are the little touches added by the new owners (since 2012), scattered in the corridors and lounges — small, offbeat objects, like vintage swimwear framed under glass, collections of old paddles, or kitsch paintings that tastefully know their place. Here, nothing is ostentatious, all has discreet elegance — that of good taste. 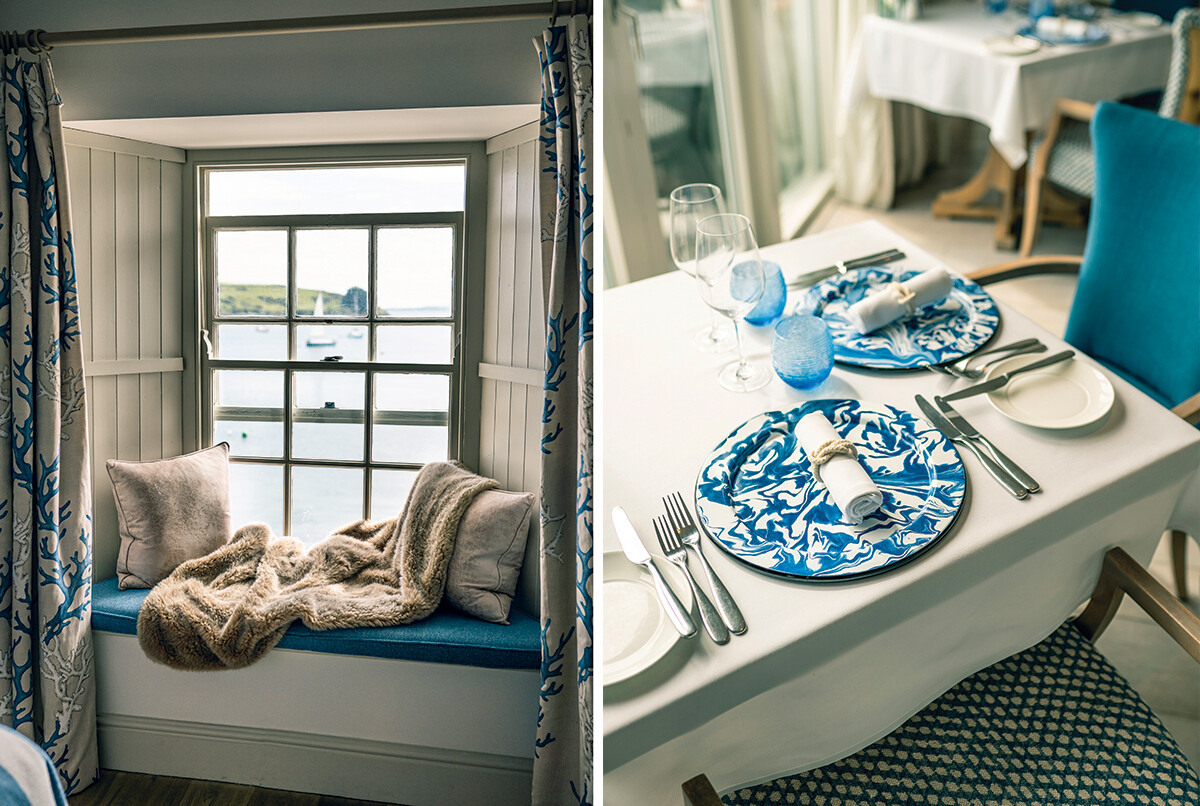