France’s famed Champagne region is beloved worldwide for its wine, bubbles, and incomparably talented craftspeople. Visiting the area’s four Relais & Châteaux properties is a delicious way to experience the elements of this effervescent land.

“The artisan, like the chef, strives to tame a substance, to master it, all while bending to the ingredient’s own character and strength, without ever seeking to distort it.”* In the kitchens of Le Domaine des Crayères, Philippe Mille, the renowned chef of the two-star Michelin restaurant Le Parc, mines mines his treasure trove of technique and imagination to create utterly incomparable dishes, inspired by the bounty of land and sea. And speaking of the sea, it was, in fact, here 45 million years ago, covering this land of Champagne that is now covered in grapevines. That aquatic past gave birth to the famed chalky soil loaded with trace elements, those invisible-yet-essential components that give champagne such elegance.

Learn more about it by visiting La Cave aux Coquillages, a deep dive into a long-vanished ecosystem, showcased by a unique and fascinating collection of fossils (more than 300 species). This memory, frozen in time, has been delicately extracted from limestone, Olivier Scieur’s favorite substance. Trained at the venerable Rodez institution of Les Compagnons du Devoir, then at the Beaux-Arts graduate school in Montpellier, he settled in Congy in 2006. Be it creation or restoration, he breathes new life into vineyard boundary markers, statues, stairs, and fountains. Chalk, craftsperson, chef – the circle is complete.

Arnaud Lallement, sparkling with his three Michelin stars since 2014, has made L’Assiette Champenoise the essential experience for those who appreciate sincere and unostentatious haute cuisine. At this restaurant, founded in 1975 by his parents, and carrying on the work of a father who left this earth too soon, Arnaud, with his wife Magalie and sister Mélanie, has made it an extraordinary place for both accommodations and dining. With more than 1,000 champagnes in the cellar, perfect pairings are at his fingertips, such as a Krug 1990 Magnum with line-caught turbot in vin jaune. Being a nature lover, he restores his soul at home amid the 100 species of trees on his property.

Wood can be found in the restaurant, too, with the custom works of L’Artelier, a new enterprise in wood artistry established in 2017 by Geoffrey Martin. Their craftsmanship enchants guests throughout their meal with creations like these octagonal, numbered mignardise dishes.

As an alternative to his verdant home terrain, Arnaud happily strolls through the Forêt Domaniale de Verzy, the state forest harboring more than 800 dwarf beech trees with spookily twisted branches. Wood, a source of comfort and contemplation, always reconnects us to the earth.

In 2023, L’Hostellerie la Briqueterie will celebrate its 50th anniversary. Monsieur Chevrier, an architect who turned an old brickyard into this holiday resort, is seeing his dream kept alive by Alix Philippon. Since 2004, Alix has undertaken a wholesale renovation of this hotel on seven acres/three hectares of land, with a spa and a gourmet restaurant, where young chef Benjamin Andreux modernizes classic cuisine with both feet firmly planted on the soil of Champagne.

This region is truly something of a wonderland, as you will discover in the nearby town of Épernay, home of the Museum of Champagne Wine and Regional Archeology. This fascinating institution inside the handsome Château Perrier takes you back in time as you examine more than 2,000 objects, engage with 47 interactive displays, and admire 26 models (with eight designed for the visually impaired). You will learn not only the history of wine, but how the landscape and subsoil here were formed.

It’s the soil that inspires Gabriela Gantuz, an Argentine ceramist living and working in Courtisols who specializes in mayólica, a brush-drawing technique that creates an aqueous color finish. Her original ceramics come to life as they are removed from the kiln, each a new surprise that lightens the heart–rather like a glass of champagne.

The 17th-century Château de Courcelles presents an imposing, almost regal grandeur to guests as they meander through its formal gardens. This serene, verdant expanse, traversed by white stone walkways, is surprisingly close to the Chemin des Dames, where the echoes of 1917’s Second Battle of the Aisne still reverberate in the air.

The Anthonioz family are the stewards of this establishment, considered one of the most beautiful hotels in the world by Condé Nast Traveler magazine. A property once frequented by Jean-Jacques Rousseau on leisurely visits; by Racine, La Fontaine, and Dumas, who all stayed there; by Jean Cocteau, who, legend has it, designed the stair railing. Such art and culture naturally season the dishes prepared by the hotel’s chef, Lucas Vannier. You might also enjoy a beverage in the exquisite library, daydreaming of your heroic deeds in tantalizing tales.

In one such scenario, perhaps you set off to battle a fire-breathing dragon that has taken possession of the Donjon de Septmonts a 12 miles/19 kilometers away. This 14th-century keep is the most imposing vestige of the castle, once the residence of the bishops of Soissons and a stopover for Saint Louis. It rises high over the town, the lush grounds, an arboretum, and an orchard.

To see old magic made new, knock on the door of Hélène Potin’s studio in Coulonges-Cohan. This maître artisan, who studied at the École Estienne (the traditional name of the École Supérieure des Arts et Industries Graphiques), is a master of the ancient art of bookbinding, gilding, and restoration, penning yet another delightful chapter of your stay between Aisne and Champagne.

Inspired by the book : 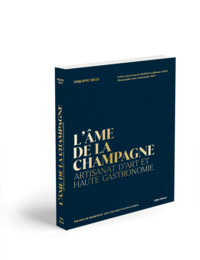 Philippe Mille, chef of the two-star Michelin restaurant of Domaine des Crayères and Meilleur Ouvrier de France, celebrates the soul of Champagne, his adopted land, in this great gastronomy book. This unique book is structured around 16 subjects, from chalk to glass, which are as many journeys to discover the heritage and craftsmen of the region. Artisans, terroir, heritage, gastronomy, aromatic palette of champagnes... This great book of chef, unique in its kind, very richly illustrated, celebrates in a novel approach all the soul of Champagne.