Travel the world, from Sicily to Mykonos, New York to Dehli, with these ten films that shine a light on the ultimate celebration of love–the wedding day. These memorable films show us that there is no right way to say, “I do,” and certainly no one place to do so either.

Say "I do" surrounded by bursts of energetic song and dance on a Greek island as in Mamma Mia! The wedding scene, and much of the film, was shot in the idyllic island of Skopelos – although in the film it’s referred to as Kalokairi. Skopelos has more than 360 churches and chapels, but the actual chapel featured, now a top wedding destination, is the Agios Ioannis Prodromos, close to the town of Glossa, atop a peninsula overlooking the bluest of seas.

Recreate magic in the Cyclades :

at Myconian Korali, on a hillside overlooking the Aegean Sea, in Mykonos, Greece. 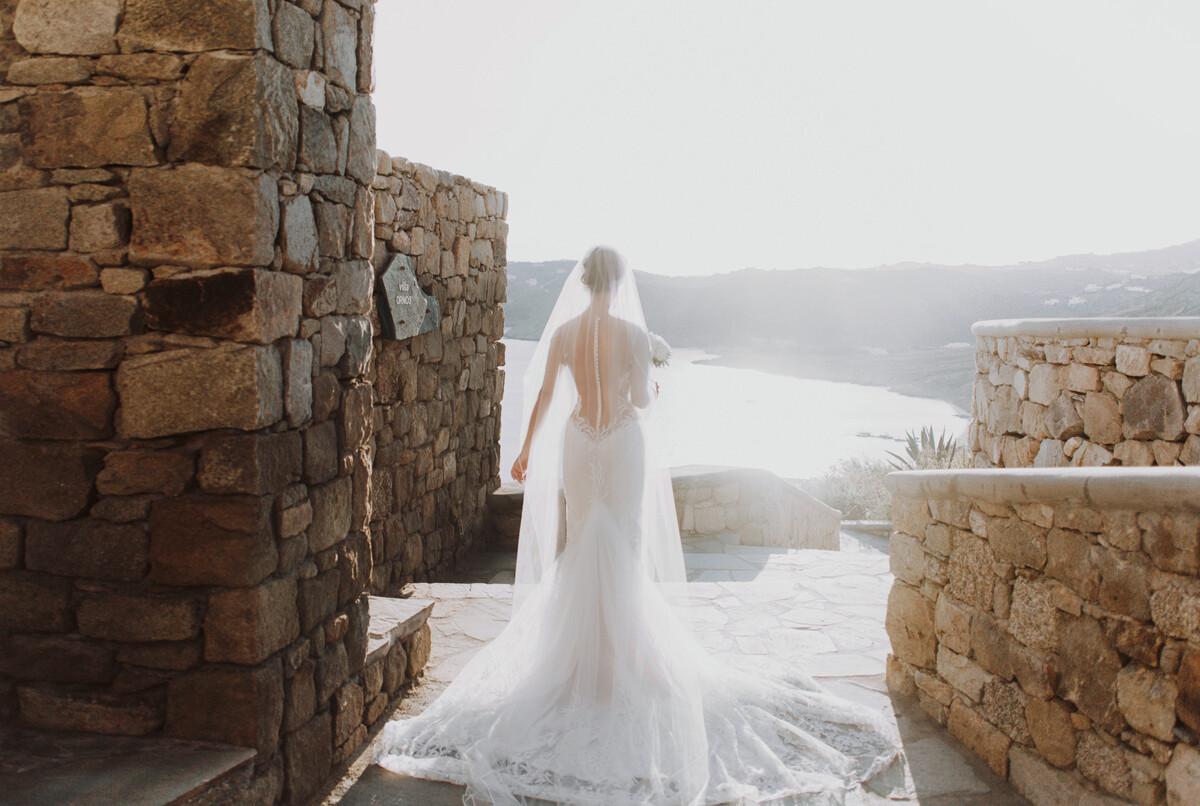 2. At the top of a Chicago building like in "My best friend's wedding"

There are a few things that stand out in this American classic and the song, “’I say a little prayer for you”, is surely one of them. In addition is the inexorable nature of love showcased throughout – the fight, the passion, the celebration. “If you love someone, you say it, right then, out loud. Otherwise, the moment just passes you by,” the groom, Michael says. He and Kimmy marry on Chicago’s Magnificent Mile, at the Fourth Presbyterian Church, on Michigan Avenue at East Chestnut Street, followed by a big traditional and equally memorable reception of song, dance and cake. 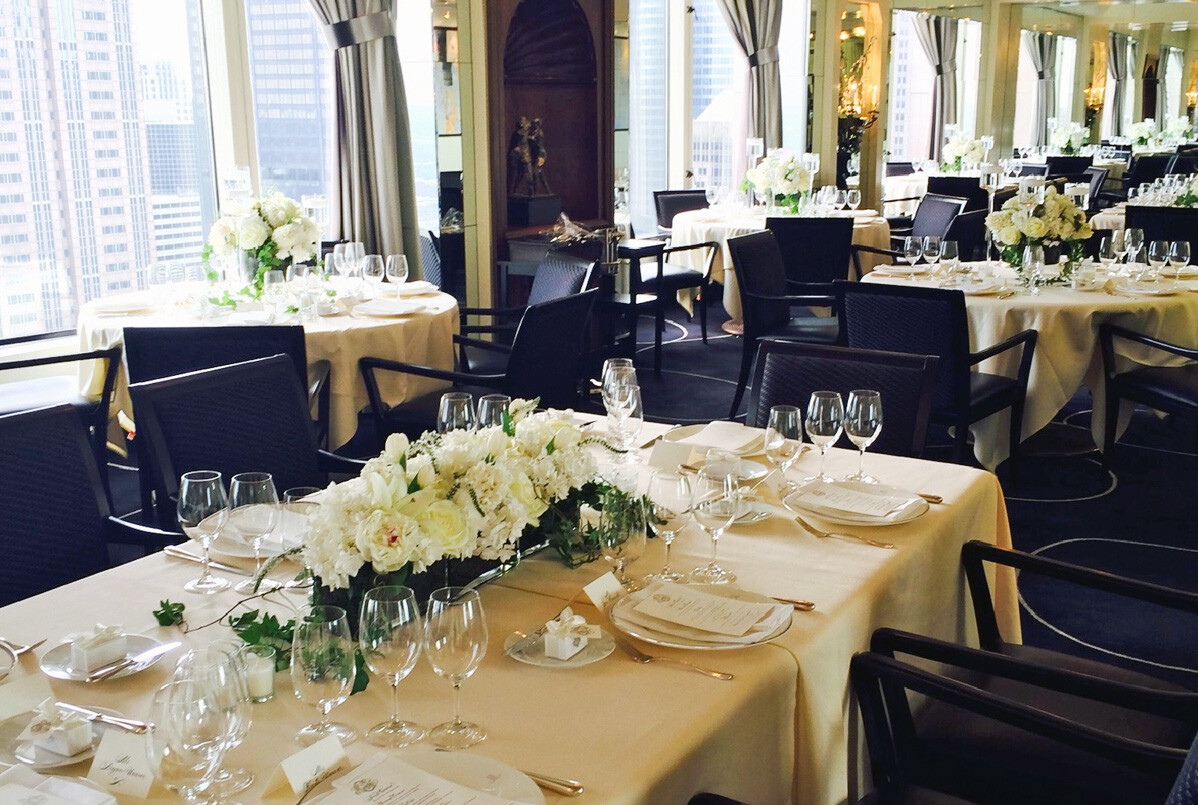 Perhaps not the obvious go-to film for wedding inspiration, The Godfather is a cinematic masterpiece with family as a central theme with two distinct wedding scenes. The New York wedding of Connie Corleone, Don Vito's daughter, and Carlo Rizzi, is a grandiose outdoor celebration with a Godfather touch of excess. But our interest is in the Sicilian nuptials between Michael and Apollonia, much more traditional, solemn and intimate – from the church, down the cobbled streets, to the celebration at the bar. While set in Corleone, the scene was filmed in Savoca.

at Locanda Don Serafino, in a maze of streets and baroque churches of Ragusa Ibla, in Sicily, Italy. 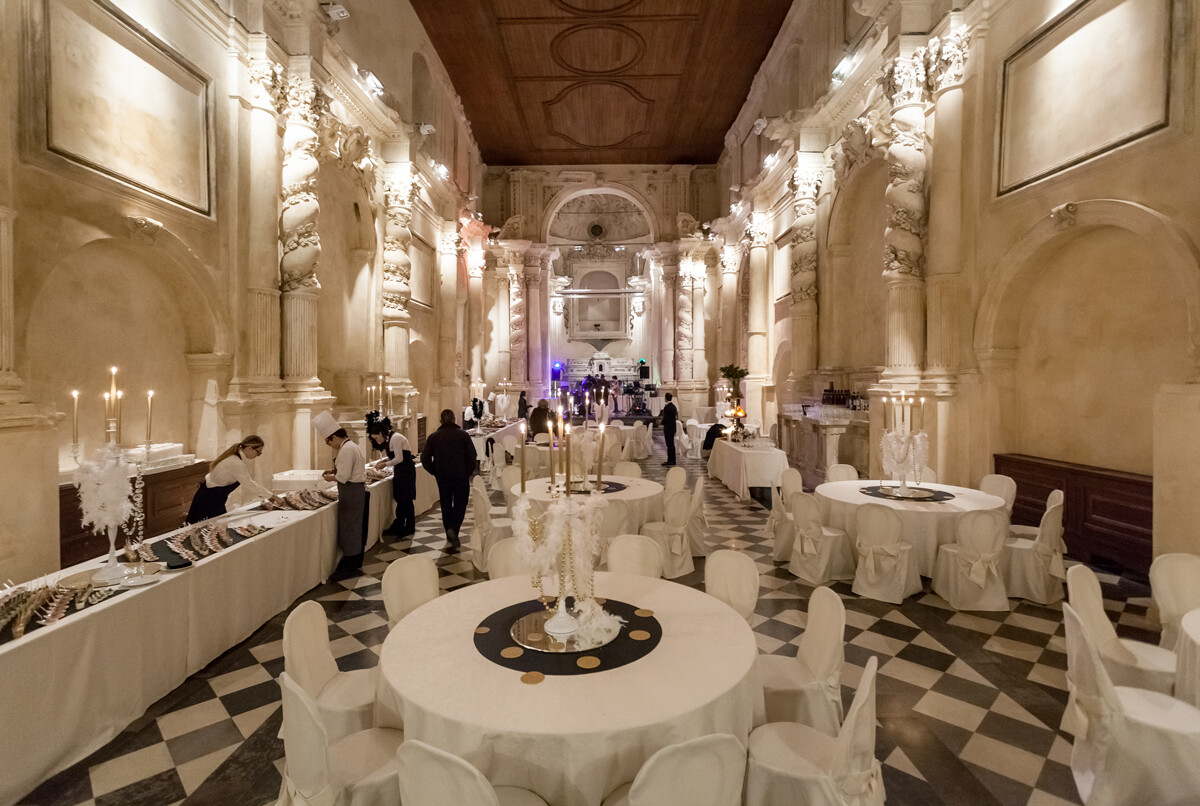 At the center of this comedic French film is a wedding between couple, Pierre and Helena, in a magnificent 17th-century chateau, filmed at Château de Courances, in Essonne, France. Don’t be put off by the behind-the-scenes shenanigans of wedding planner, Max and the rebellious staff and madcap disasters. What you should focus on is the success in spite of the odds, and the creation of a one-of-a-kind wedding celebration, with endless food, drink, song and dance in a beautiful setting.

at Château de Courcelles, a 17th -century castle, surrounded by a park of 23 hectares and a French garden, in Picardy, one hour from Paris. 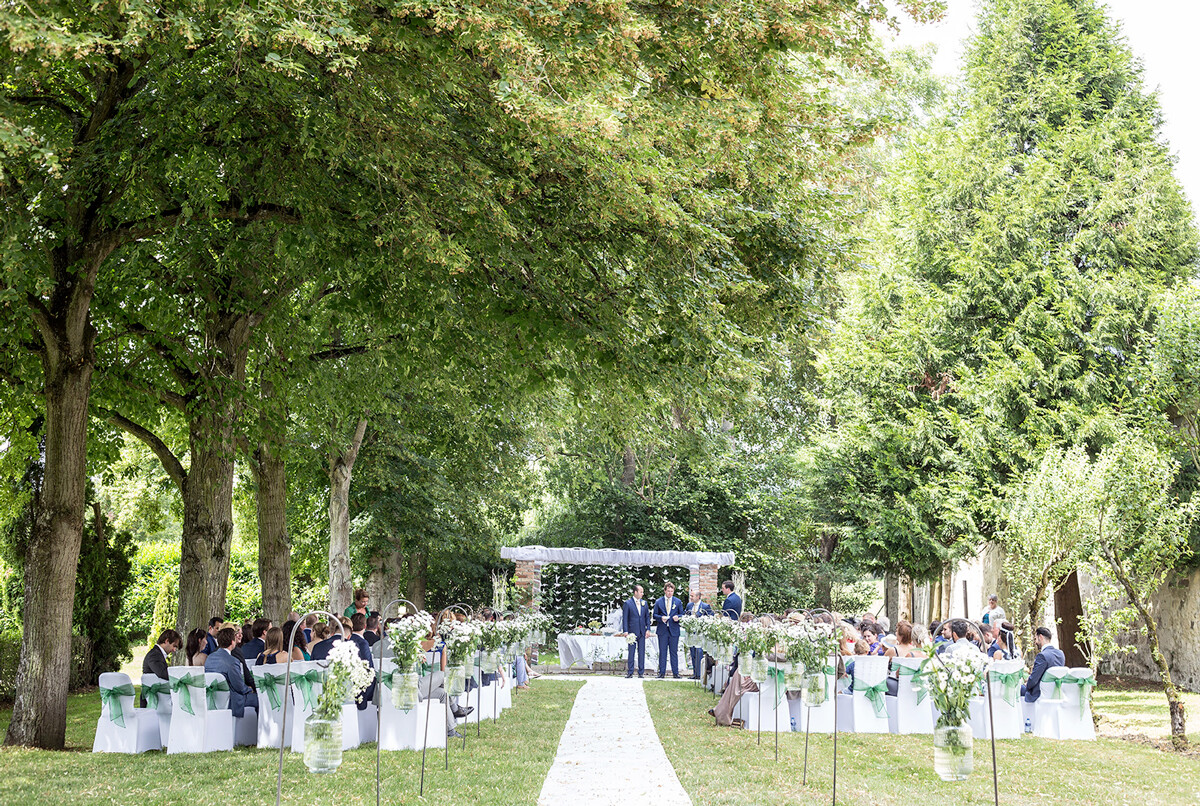 Jane loves weddings. After having been bridesmaid 27 times, collecting the most extravagant dresses, she finally meets the one who will also allow her to finally live her great moment. At the end of the film she gets married on a beach, facing the ocean. The 27 brides she supported are her bridesmaids, wearing the dresses she once wore at each of their weddings.

at Ocean House, a beautiful Victorian house on the oceanfront in New England. 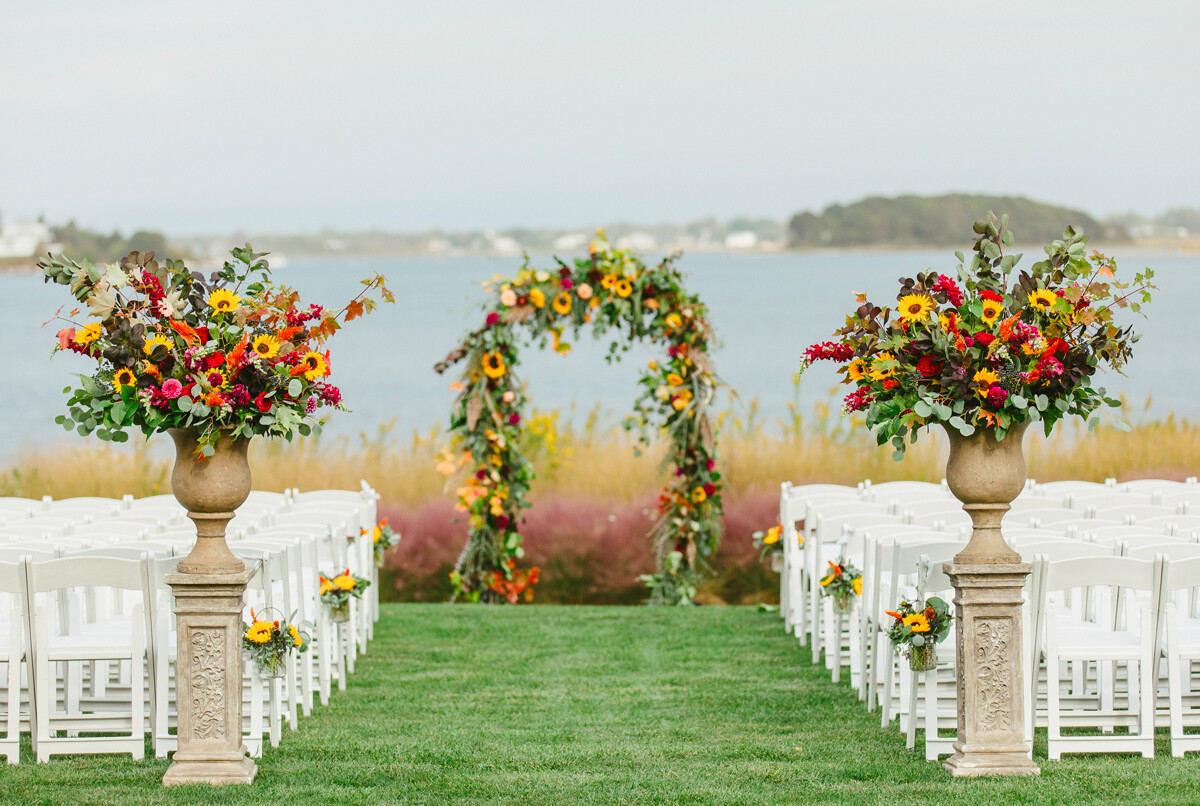 6. A colorful festival in India like in "Monsoon Wedding"

This classic is a rich celebration of India and all its color and culture, shown through the journey of a traditional Punjabi Hindu wedding in Delhi. It unites one great big extended family from all over the world for several days of dancing, music and bonding in a sea of saris and jewels. It is not something to get through quickly; but rather a fiery festival of energy, life and togetherness.

at Rajmahal Palace, one of the oldest and most treasured palaces in Jaipur, Rajasthan's bustling capital. 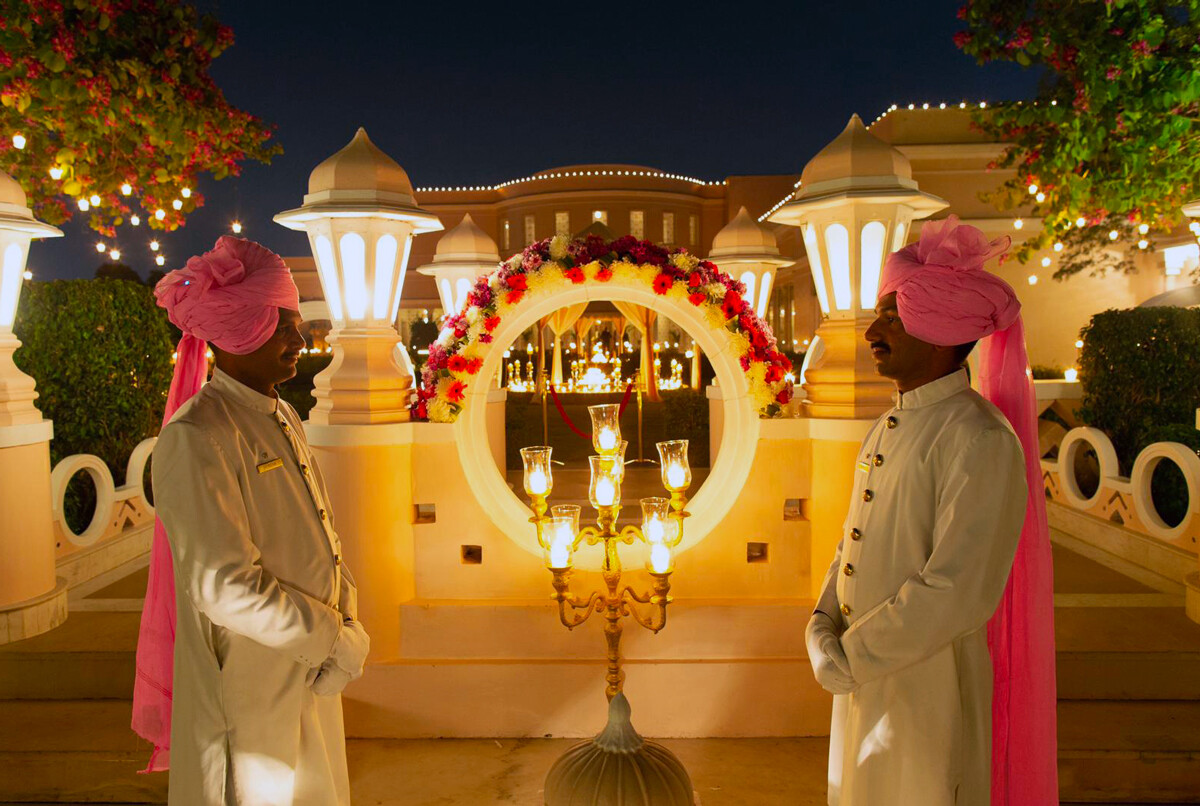 There was the lavish, New York Public Library wedding that Mr. Big missed and the city hall wedding with John James Preston and a label-less dress. But there was also the traditional Jewish New York wedding of Charlotte and Harry, in a synagogue with a “’Yentl chic”’  theme – with glass-smashing, Ketubah-signing, Hora-dancing and “candles, candles, candles.” And Carrie’s words of support, “You have a wonderful man who loves you. Who will be there to catch you when you fall. Do you know how special that is?”

at Daniel, the fine dining restaurant of the french chef Daniel Boulud in the Upper East Side, Manhattan. 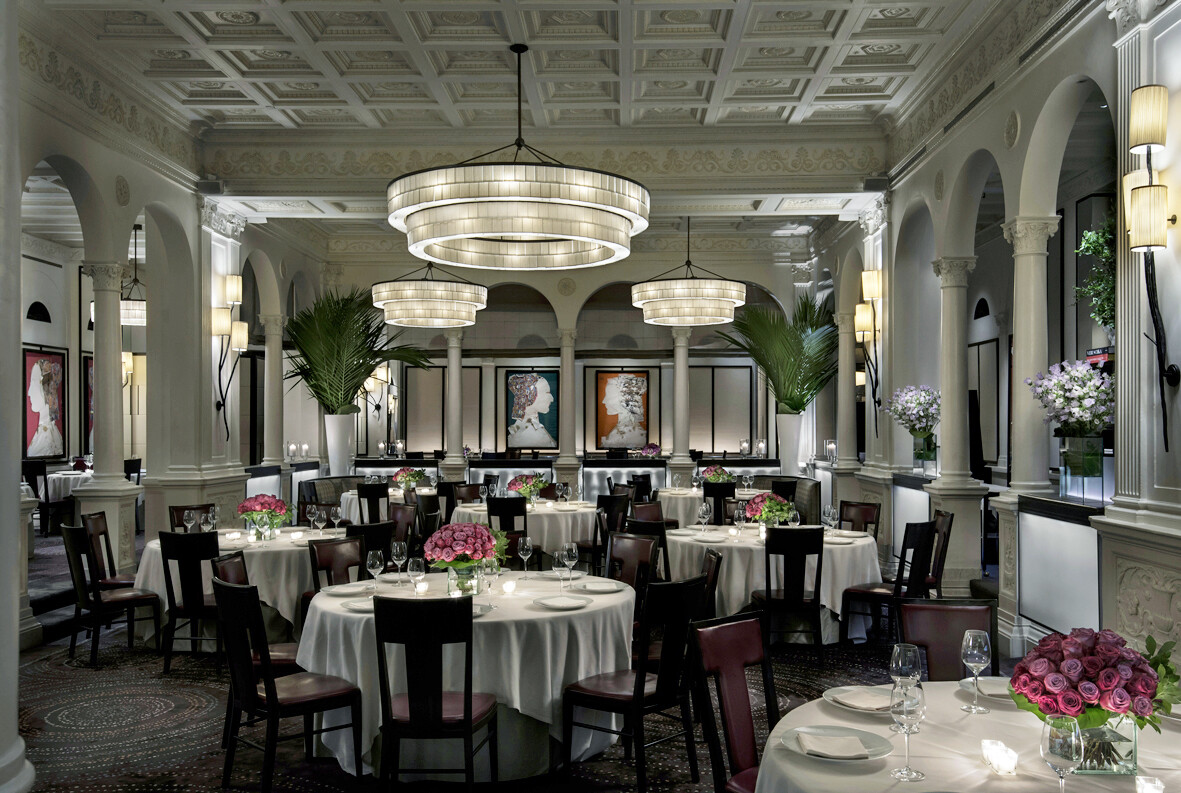 Who doesn’t want to be serenaded by an entire choir and arbitrary musicians popping up in the pews – singing out the words of the Beatles’ song, “All You Need Is Love” ? Particularly on one of the most poignant days of your life… “Love, love, love, love is all you need,” plays over the aisles of Grosvenor Chapel, in South Audley Street, Mayfair, London, with the spirit of Christmas adding extra magic to the occasion. It explains the rather entranced look on the faces of Keira Knightley and Chiwetel Ejiofor as they leave the church together as newlyweds.

Recreate magic in an English manor, near London :

at Gravetye Manor, a beautiful Elizabethian manor in West Sussex, not far from London. 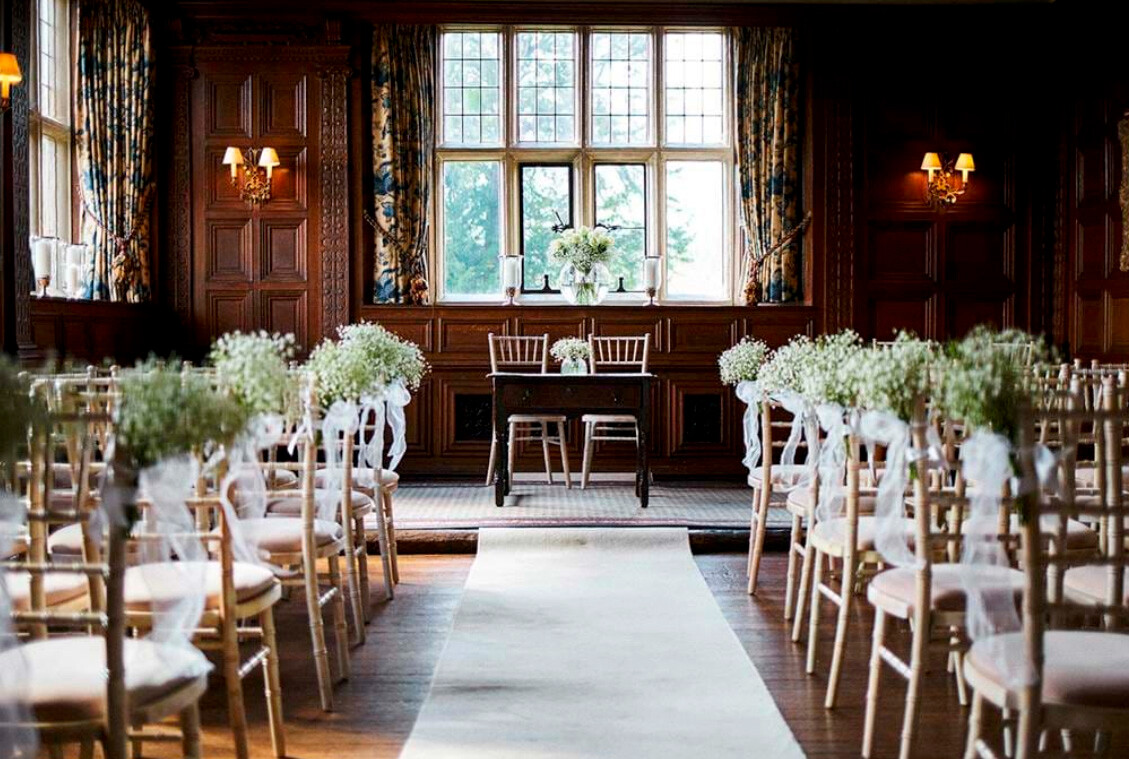 9. In the garden of an English manor like in "Sense and Sensibility"

Victorian attire dominates this adaptation of Jane Austen's novel, directed by Ang Lee – including the wedding of Marianne and Colonel Brandon (Kate Winslet and Alan Rickman). Set in the 19th  century, the couple tie the knot in the Berry Pomeroy Church, in the village of Totnes, Devon, with Marianne in a delicate veil and open robe, standing collar and long train over a cream underdress, and the Colonel in his regimentals: red coat, white gloves, gold epaulet, pantaloons and black boots. A playful procession of children waving colorful ribbons on sticks begins the wedding festivities, followed by the new husband and wife emerging from the church to a scene of violins, confetti and countryside.

Recreate magic in the Devon :

at Gidleigh Park, a quintessential country house on the edge of the River Teign in Devon, England. 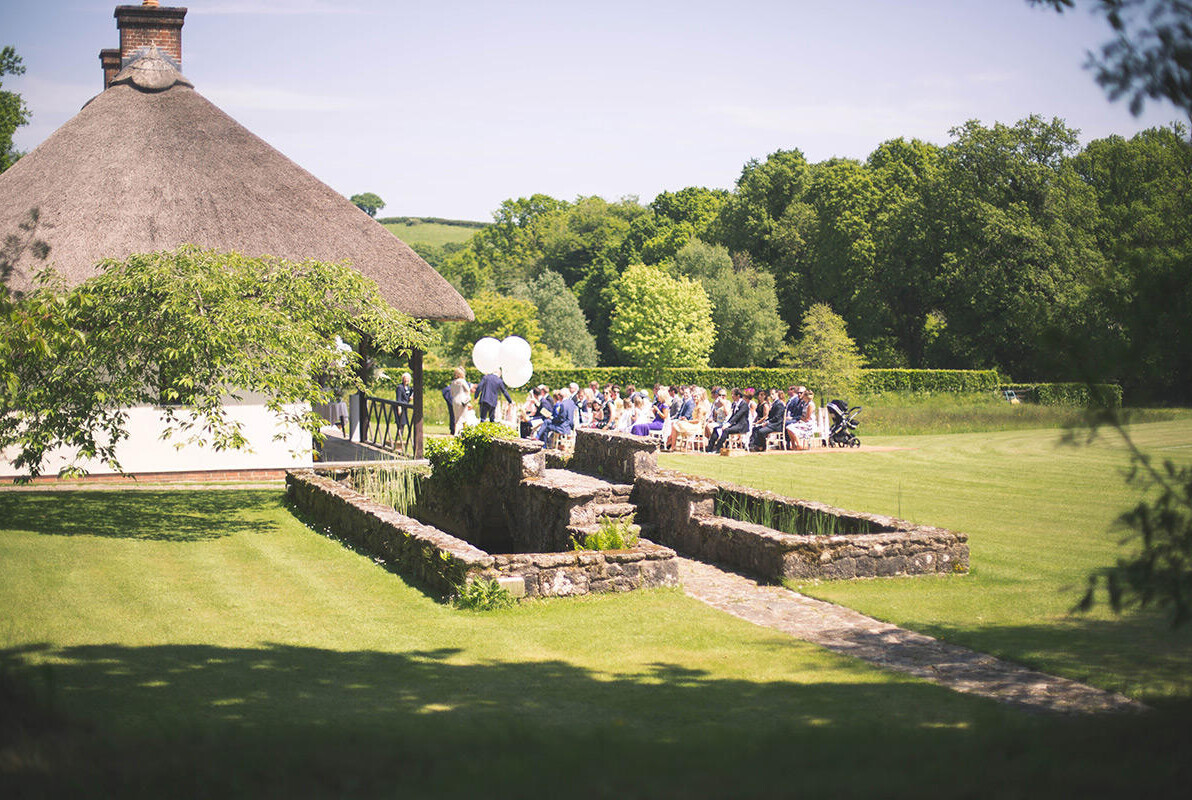 10. In an old American farm like in Forrest Gump

The sweetness and Southern charm of best friends, Forrest and Jenny’s wedding at the end of the film is hard to resist. At this simple, intimate ceremony in the yard of Forrest’s childhood home, in Greenbow, Alabama (actually filmed in South Carolina), pink ribbons and flowers decorate the house, while out on the lawn, overlooking a tranquil lake, Jenny, in an ethereal white gown, and Forrest, in a light graey suit, are pronounced husband and wife under an altar.

at The Fearrington House, on the land of a former farm near Chapel Hill, North Carolina. 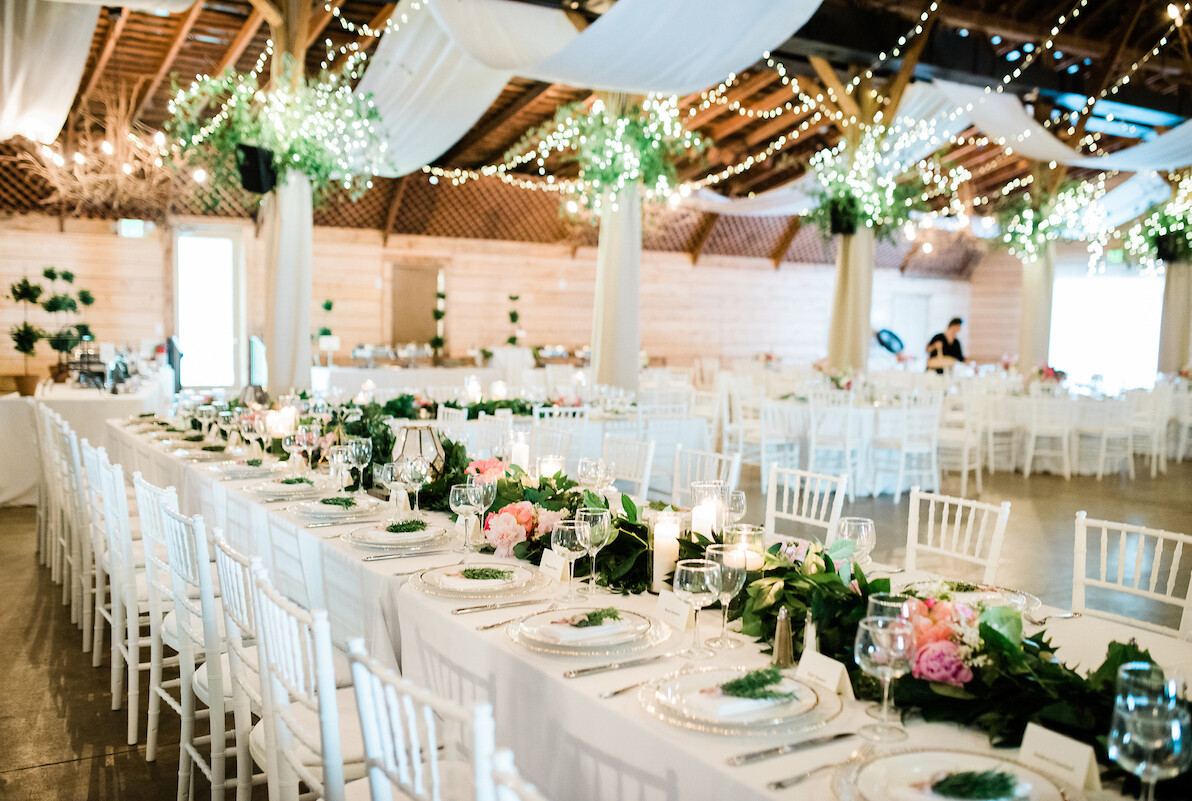