Instagram has opened up the beauty of the world to a wider range of excited travellers, photographers and everyday individuals. Here are ten undeniably photogenic places around the world to add to your own Instagram feed.

Memories of Paris stay with you forever. Instagram isn’t needed to help you hold onto the city, but in the name of art, photography and followers, taking your phone or camera with you along the Champs Elysee or down Rue Cremieux, to Tuileries Garden or Jardin du Luxembourg is just the butter on the baguette. The ultimate sight, though, must be the Eiffel Tower, whether in the light of day, the golden hour of sunrise and set, or at night with it all lit up. Try any and every angle.

Where to stay: Hôtel Splendide Royal Paris
Located in 8th Arrondissement, this mansion stands tall, like the Eiffel Tower which you can view from the hotel as it rises out of the cityscape, a short walk away. 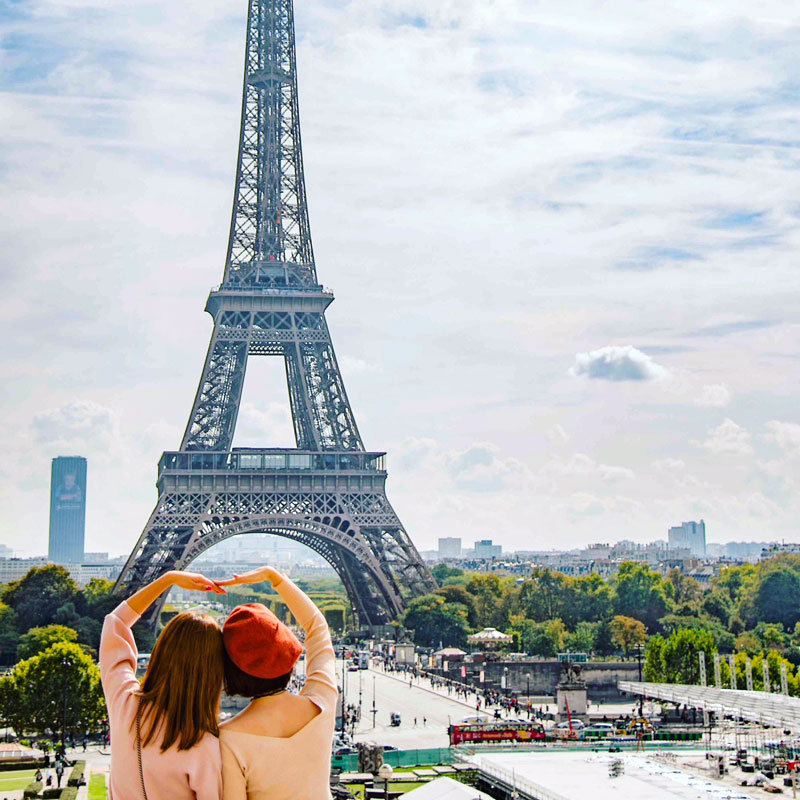 Cinque Terre (meaning “Five Lands”) is made up of five small towns on the western coast of Italy in Liguria, just above Tuscany. Set within a national park beside the Mediterranean Sea, there is plenty of natural beauty begging you to snap #nofilter. But what really grabs your attention are the colourful houses that rise out of the rugged landscape. Visit Manarola’s marina, with its cascade of some of the most iconic views of your multi-coloured models.

Where to stay: II Bottaccio
Located in Tuscany, in the foothills of the Apuan Alps and sandy beaches, II Bottaccio offers tours to nearby Cinque Terre in classic well-equipped wooden yacht, letting you experience the charm of Riomaggiore, Manarola, Vernazza, Corniglia and Monterosso. 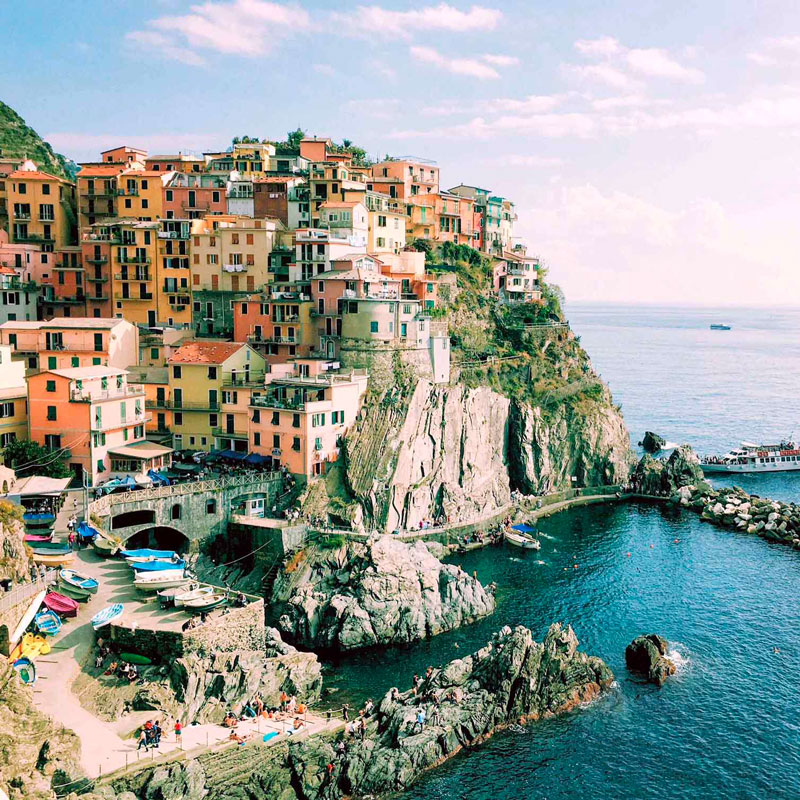 Where to stay: Awasi Patagonia
This collection of independent villas lies in a private reserve overlooking Sarmiento Lake, Torres del Paine National Park and the Patagonian Steppe. Your private guide will usher you away to the park to show you the iconic and the off-the-beaten path sites and those perfect photo opportunities. 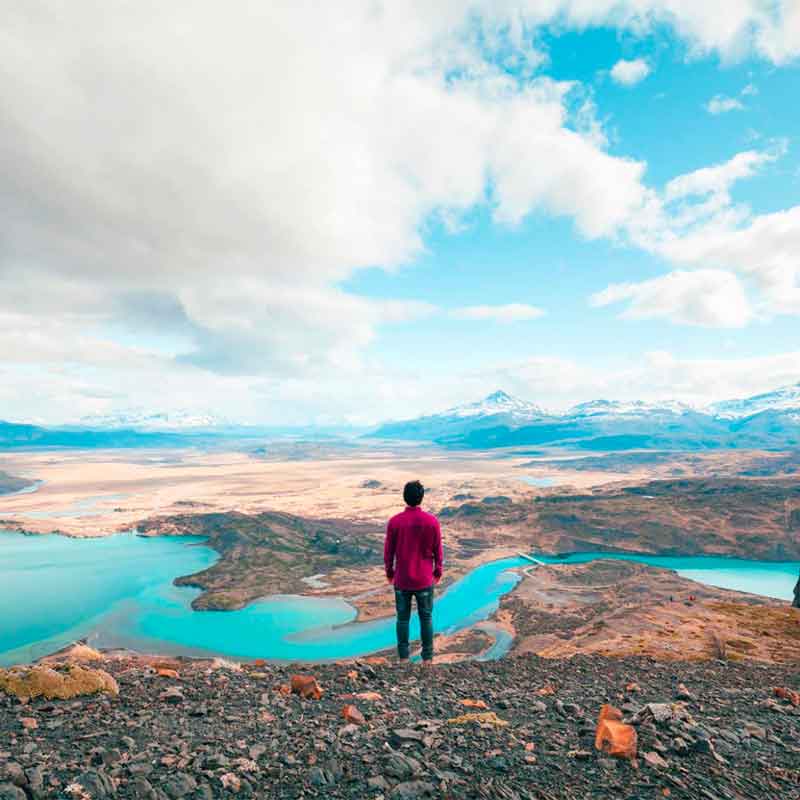 If you are the type of person whose mood is affected by colors, the cool blue tones of Essaouira will whisk away any stress you may have felt in Morocco’s bigger cities – it’s a completely different place. Blue is Essaouira’s accent color that reminds you of the Atlantic Ocean lapping at the old fort walls. At dawn, the streets are quieter giving you more freedom to play, while in the afternoon and toward sunset, you’ll find exciting shadows and shifting colours.

Where to stay:  L’Heure Bleue Palais
Situated in the heart of Essaouira, this Moroccan palace has kept the cachet of a traditional house and the art of receiving proper to this country. This large riad of the eighteenth century offers plenty of Instagrammable sites of its own. 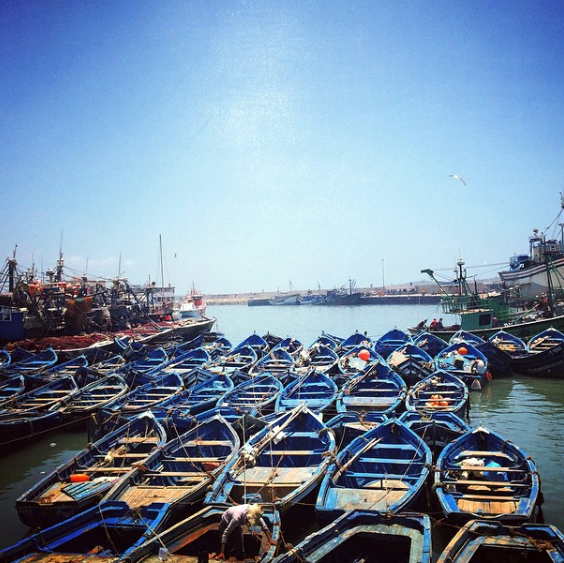 5. Fly away with me – The Cappadocia Hot Air Balloons, Turkey

Turkey’s Cappadocia region is one of the most striking locales for hot air ballooning in the world. Hop in your own balloon and watch the sun rise over distinctive rock formations and rippled ravines created by intense volcanic activity, and something they call “fairy chimneys” in the heart of Turkey. Video or photograph the endless colourful balloons floating around you while you gently hang in the air – the perfect setting to play with camera angles.

Where to stay: Museum Hotel
Museum Hotel, located right in Cappadocia, is the perfect locale for panoramas of this unique landscape and the hotel management are more than willing to help arrange hot air balloon rides for guests. 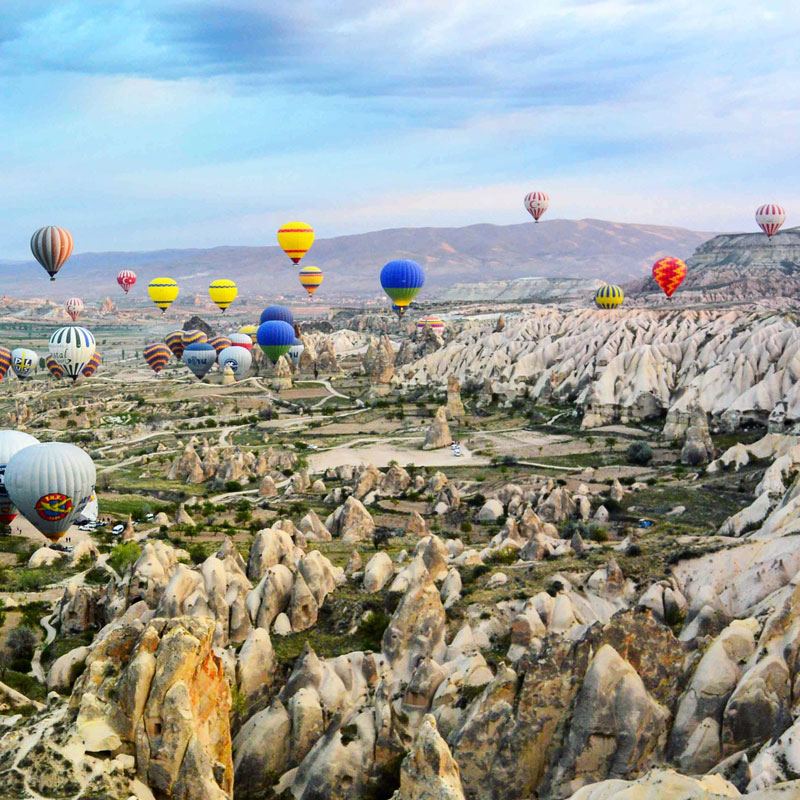 6. The art of the atolls - The Maldives

It’s the view from above that really tempts the camera out of your bag or phone out of your pocket. The perfect white surrounding the small atolls rising out of the Indian Ocean – first the pale blue of the shallows and then the deeper shades of the endless sea. It’s the face of the Maldives and can be captured best from the seaplane window. But just about any perspective of beautiful beaches, palm trees and cocktails will entice your insta-followers #likeforlike.

Where to stay: Soneva Fushi
Protected by its own reef, the remote island getaway of Soneva Fushi offers the quintessential Maldives experience – as well as scenic seaplane transfers to its setting in the Indian Ocean. Get those cameras out mid-flight! 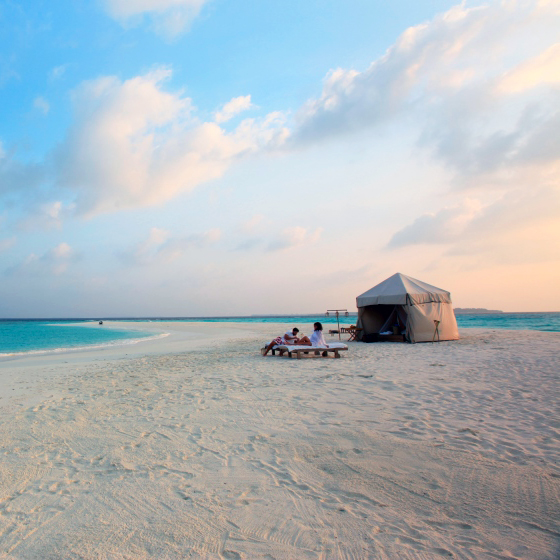 One of the most iconic views of the natural world is that peculiar flat-topped mountain that rises out of the coastal city of Cape Town. Head to Bloubergstrand for a picture of Table Mountain from afar, with Lion’s Head and Devil’s Peak as bookends, or hike (or ride in the cable car) to the top for a close-up view with the rock rabbits and your feet dangling over the edge #fromwhereisit. Some days, the “table cloth” cloud bank shimmies and rolls around the mesa, creating astonishing sunrise and sunset shots, and others it lifts to reveal clear vistas of the city and Atlantic Ocean.

Where to stay: Ellerman House
This grand mansion, in its coastal setting in Bantry Bay, lies between sea and mountain and only a short drive from the peaks of the Table Mountain range (about five kilometres). Bloubergstrand (particularly Dolphin Beach) is a quick 25minute drive away. 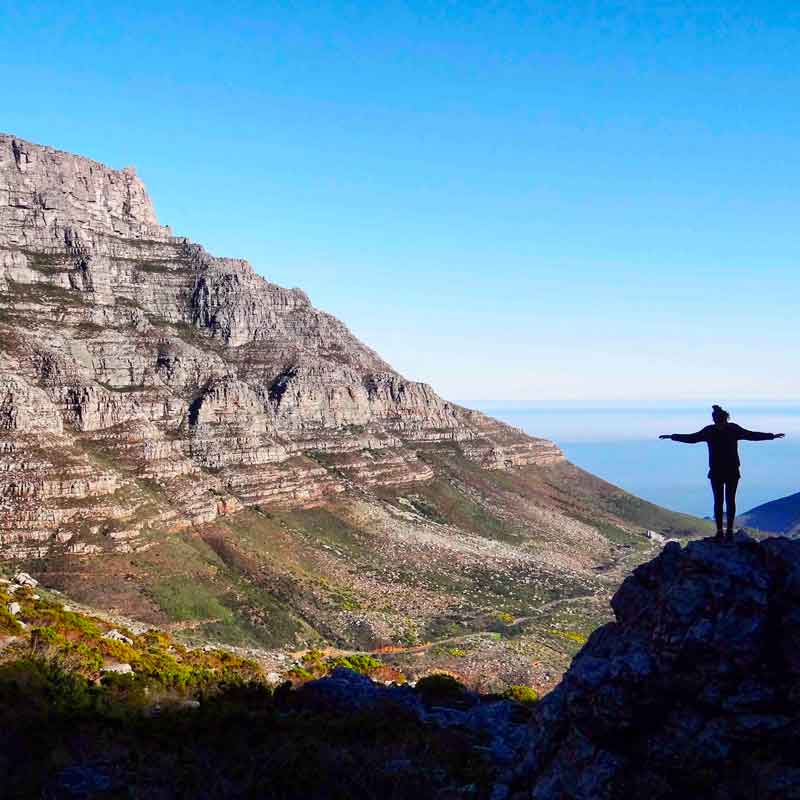 8. A world in pink – The cherry blossoms of Kyoto, Japan

Kyoto was Japan’s capital city for 1,200 years and is known to be the city where Japanese culture was born. It is also considered the country’s most popular city for cherry blossom viewing. Arrive in spring (late March and early April) to witness a city bathed in delicate pink as the sakura blooms across the canal-side stoned paths, ancient temples and shrines, private gardens and public parks.

Where to stay: Kanamean Nishitomiya
This 19th-century townhouse is a peaceful hideaway in the urban setting of Kyoto, with seasonal flowers of its own. Head out on foot or by bike to explore the cherry blossom trees of the rest of the city close-by. 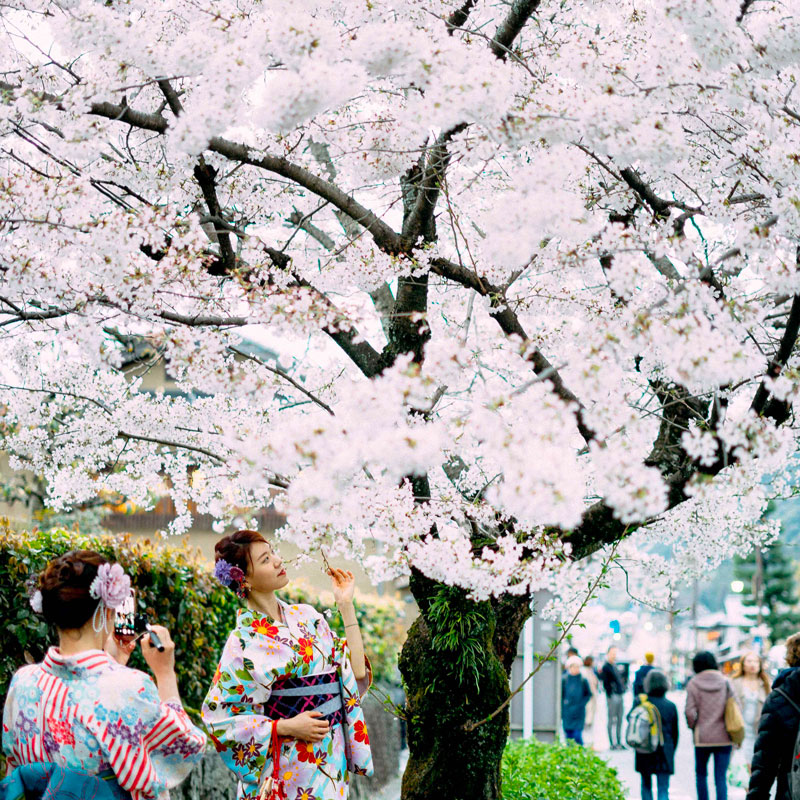 It is one of America’s most spectacular natural sites. With wild waterfalls, granite domes, snow-capped peaks and river reflections, Yosemite National Park poses all year round. Capture the grand and small on a hiking trail, with the chance of a black bear, bobcat or coyote striding into focus. Pose with rod and reel while fly-fishing or kitted up in rock-climbing gear, or snap the tufts of your horse’s ears with a grove of giant sequoias in front of you while horse-riding. Don’t miss Ansel Adams’ Tunnel View – with El Capitan, Half Dome, and Bridaveil Fall in one shot. #getoutside

Where to stay: Chateau du Sureau
This grand inn set on a nine-acre property rests in the foothills at the gateway to Yosemite National Park in Oakhurst, California. The team are available to organise all kinds of tours into the park for snap-happy guests – including private guided photo tours. 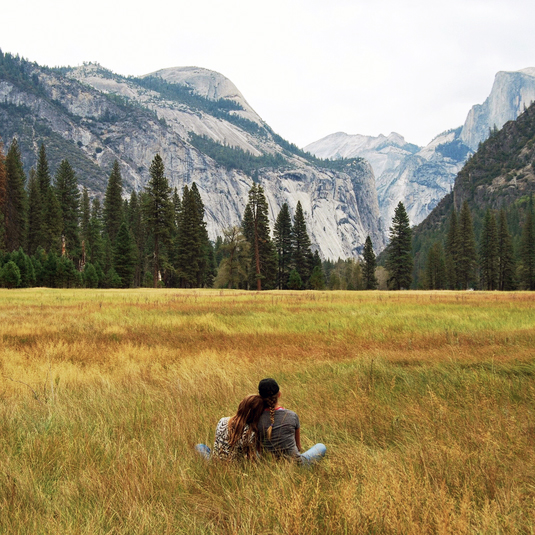 There are many reasons Instagrammers are attracted to this island shaped like a wonky croissant, as Lonely Planet describes it. There are endless photo-worthy views: for instance the caldera of Santorini, volcanic-sand beaches, electric sunsets in Oia, romantic dinners and swimming pools beside the sea, private catamaran sailing on the clear waters of the Aegean Sea, and those marble walkways, famous whitewashed buildings, blue dome roofs and distinctive doors #Ihavethisthingwithdoors.

Where to stay: Sun Rocks
All the sumptuous Santorini views for your photographic eye can be captured right from the terrace this intimate hideaway carved into the rock of a cliff, overlooking the caldera of Santorini. The hotel also offers private catamaran trips and guided island tours. 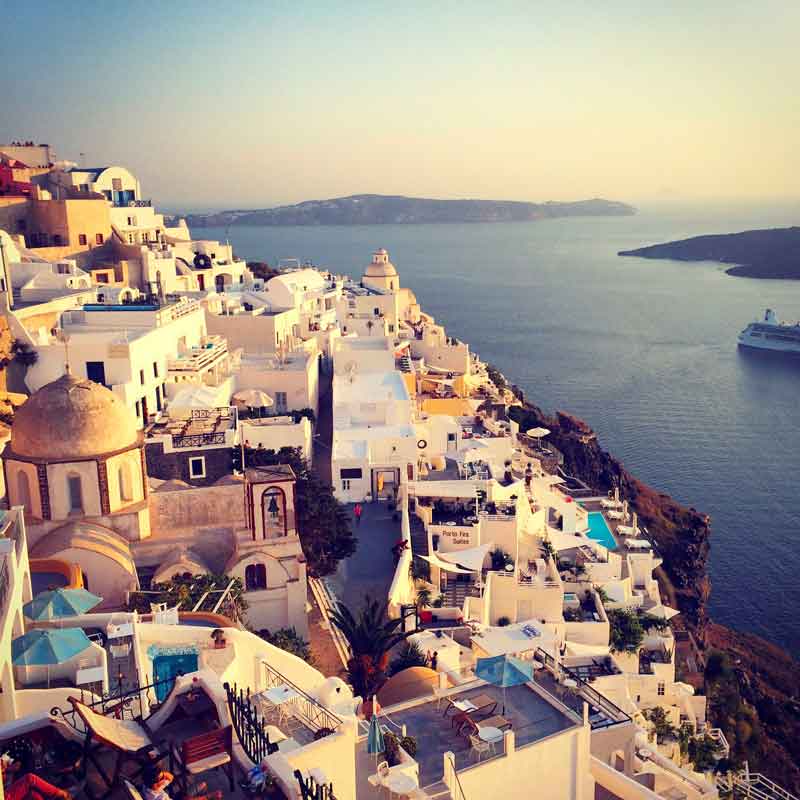