While the northern hemisphere’s temperatures keep the kids indoors or on the slopes this time of year, the tropical islands of the Indian Ocean charm the sun chasers and water babies among us, with their toasty waters and tropical conditions.

FROM THE BIG SCREEN TO THE BIG SEA – MADAGASCAR 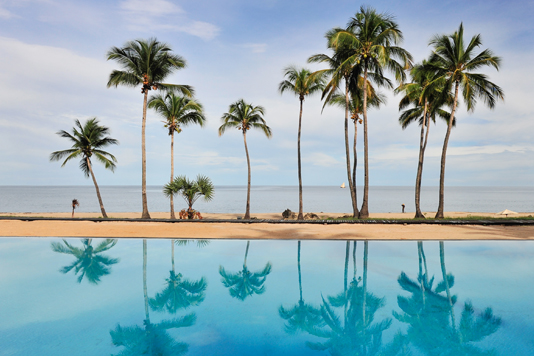 MADAGASCAR IS WILD AND WEIRD, A REFLECTION OF THE UNIQUE LANDSCAPE THAT IS THE MIND OF A CHILD. It is also the subject of one of the best kids’ films of all time, the animation called, well, Madagascar. Take the young ones to the very shores that the Central Park Zoo animals of the film find themselves, a place where animals behave like humans and the possibilities of life stretch far beyond reality as we know it.

“An enticing warmth that makes day-long adventures in the big blue the perfect family outing.”

The Indian Ocean lends its waters an enticing warmth that makes day-long adventures in the big blue the perfect family outing. Never mind the ocean’s creatures beneath the waves nor those peculiar species above it… the dancing lemurs for one – a favorite with little explorers (remember the track, “I like to move it move it...”? You will after this).

IN A NATURE RESERVE ON THE NORTHWEST COAST OF THE ISLAND, Anjajavy l'Hôtel welcomes kids from one year of age. Its rosewood villas stretch out over the beachfront beside the Mozambican Channel in the otherworldly Moramba Bay. Little ones are encouraged to join the family on catamaran and snorkeling adventures, fishing trips, splashes in the pool or water-skiing out in the open seas.

Best time of the year to visit Madagascar: April to October

A DESERTED ISLAND OF DREAMS – THE MALDIVES 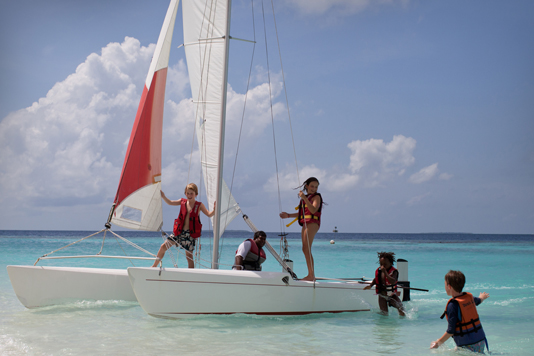 At Soneva Fushi, it is a different kind of film playing out… Robinson Crusoe. It is set on a the deserted Kunfunadhoo Island in the Maldives, surrounded by the lightest blue from your kids’ pencil boxes, tropical breezes and average temperatures of around 28°C (82°F) during the day and 23°C (73°F) at night.

“A playground for the imagination.”

SET ON A TURQUOISE LAGOON WITH WHITE SAND BEACHES, ON THE EDGE OF THE INDIAN OCEAN, Soneva Fushi is a kid’s dream – in fact, the owners envisioned it as just this: “an island of dreams for all ages”. Drawing inspiration from their smallest guest wonders, they created The Den, “a playground for the imagination.” 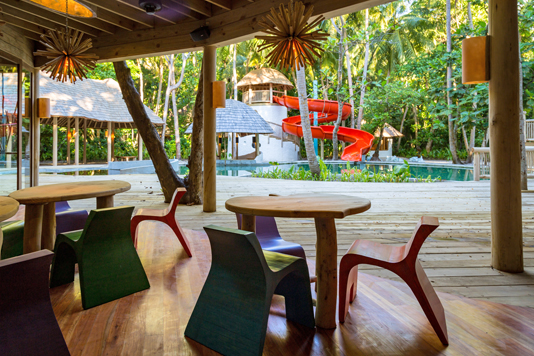 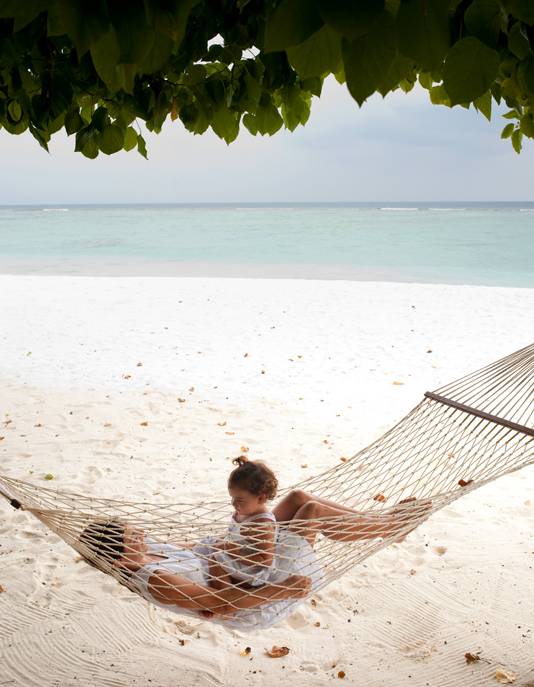 FOR PARENTS, THE HOTEL IS SAID TO MAKE YOU FEEL LIKE A KID AGAIN. And if you need a little nudge, join your littlies in The Den, for a splash in the shallow pool perhaps… Families can also hop on the hotel’s traditional dhoni sailboat and go in search of dolphins, snorkel among the manta rays and colorful fish life with a qualified marine biologist, head out on a deserted island family picnic, or take on the many water sports, such as kayaking, water-volley and paddle-boarding.

Best time of the year to visit Maldives: December to May 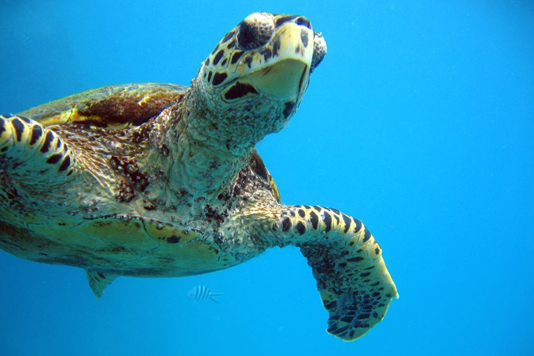 “The archipelago is a common nesting ground for turtles.”

There are many attractive features to the Seychelles. But perhaps one of the most intriguing to kids are the four-legged creatures resembling the Ninja Turtles. This Indian Ocean Island is known for both its baby turtles that swim out to sea after hatching and its giant tortoises that can live up to 100 years old. The archipelago is a common nesting ground for two of the world’s seven species of sea turtle – the green sea turtle and the hawksbill sea turtle.

Children older than eight years are welcome to experience this side of island life from Château de Feuilles, situated on Praslin Island at the center of the Seychelles. Here families can holiday together, bonding on the sea’s shore or below on a snorkeling escapade. 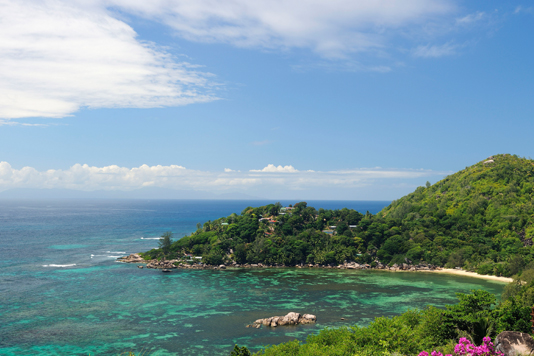 THE HOTEL’S TEAM HELPS TO ARRANGE FAMILY EXCURSIONS TO THE NEIGHBORING ISLANDS that make up the archipelago, such as Curieuse, a national park where little ones can meet the large resident land turtles; La Digue, with its pink granite rocks; Coco and Saint-Pierre, where kids can explore the submarine life up close; and Aride with its unique wildlife and exquisite beaches.

Best time of the year to visit Seychelles: April to November

AS THE KIDS GROW INTO DISCERNING TEENS, it might be white-sand sunbathing and privacy away from those young ones they once were that they’re after. As such, Mauritius’ first boutique hotel, 20˚ Sud provides a place to do just that, while exposing the family to a different culture and landscape. 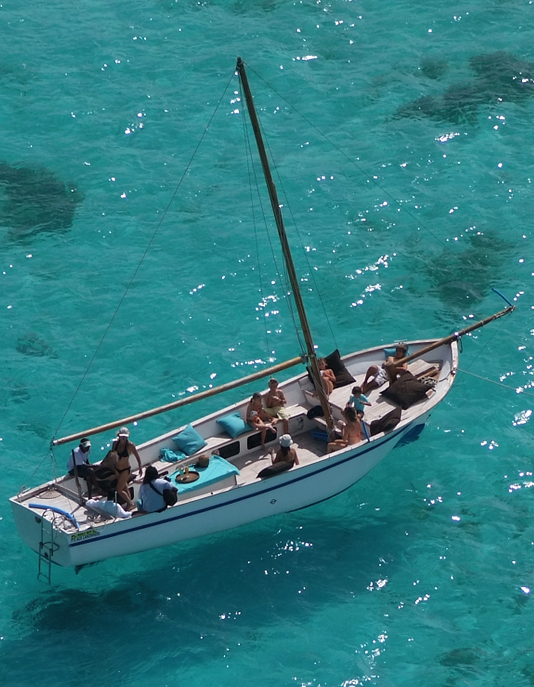 SET IN A COCONUT GROVE ON THE NORTH COAST OF MAURITIUS, nearby the sheltered beaches of Grand Baie and Pointe aux Cannoniers, 20˚ Sud welcomes children over 12. Teens can laze on day-beds under the palm fronds, beside the hotel pools or on the beach; plunge into the warmth of the Indian Ocean, clad in snorkel masks and flippers, or float above on sea kayaks, laser dinghies, Hobie Cats, stand-up paddle-boards and windsurfing boards. 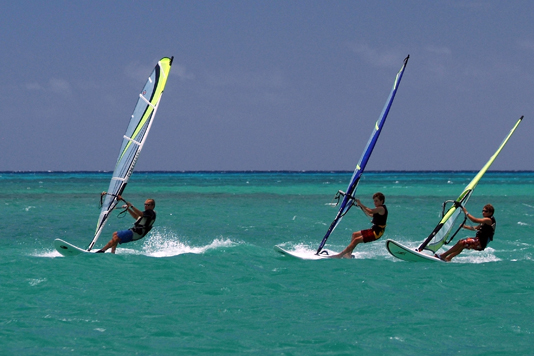 YOU’RE SURE TO TAKE HOME A HAPPY TEEN as they head back home to the cold with tales of something between (an age-relative version of) The Beach and the silver screen’s homage to surfer-chicks, Blue Crush.

Best time of the year to visit Mauritius: April to December