A series featuring forgotten vegetables to introduce a dash of variety into the kitchen for the last few chilly winter days. Let’s start with the Jerusalem artichoke, a root vegetable that is not what it seems. Its subtle flavour has seduced the chefs of the world.

FIRST UP, THE JERUSALEM ARTICHOKE: THE ARTICHOKE THAT WASN’T AN ARTICHOKE

Ironically, this ginger root look-alike is neither from Jerusalem, nor from Brazil, as its French name – “topinambour” – suggests. It isn’t even an artichoke, although it tastes just like one. This perplexing little tuber is, in fact, native to North America, and is closely related to the sunflower: Italian speakers may pick up on how the European settlers in America managed to corrupt “girasole” to “Jerusalem”.

“This perplexing little tuber is, in fact, native to North America.”

The Jerusalem artichoke ruled the culinary scene during the Second World War, since it could be sowed year-round and in the poorest of soils. It was, however, soon eclipsed by another tanned, less knobbly tuber – the potato, which became a staple in most households. Thanks to its exotic status, distinctive flavour – a sweet nutty, crunchy taste – and remarkable nutritional qualities – it doesn’t pack the starch of typical tubers – the Jerusalem artichoke is, finally, regaining its mislaid popularity. 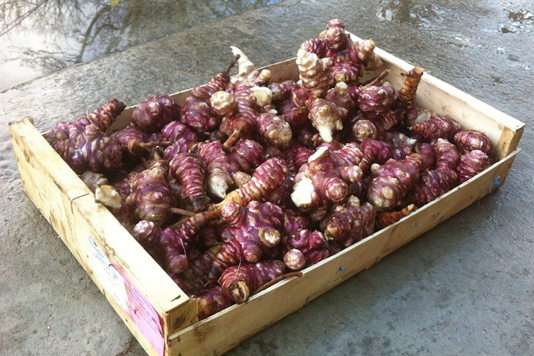 There are endless ways to prepare it. Think of it as a potato or parsnip when it comes to cooking – you can roast it, sauté it, purée it into a winter soup or fry it to serve as crisps. This is how the Relais & Châteaux chefs do it:

- Fried Jerusalem artichoke peel from Jacques Decoret who creates ingenious ways of reusing leftovers of all kinds to curb waste at Maison Decoret in Vichy, France.

- Jerusalem artichoke cream, with mini cep brioche and game canapés by André Garrett from Cliveden House in Berkshire, in the United Kingdom.

- Saddle of venison with Jerusalem artichoke and olive dust from chef Simon Taxacher at Rosengarten in Austria.

- Poached duck foie gras from the Landes in a duck broth with Jerusalem artichokes and black truffle by chef Virginie Basselot at Saint-James Paris, in France.

- Scallops and Aquitaine caviar with Jerusalem artichoke foam, lemon and hazelnut, by Nicolas Magie at the Saint-James Bouliac, near Bordeaux, France. 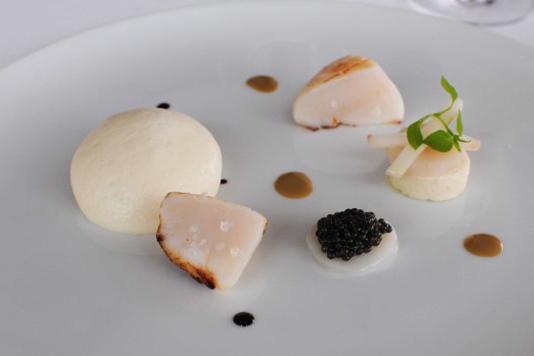