In response to the pandemic, three-star chef Michael Tusk has chosen to temporarily relocate his Quince restaurant from San Francisco to Hudson Ranch in Napa Valley. Now closer to his suppliers, he tells us about this reimagined culinary experience.

A New York Times bestselling author of six books, Jancee Dunn writes for Vogue, Travel & Leisure, The New York Times, and the Washington Post, among other publications. She lives in Brooklyn, New York. Follow her on Instagram: @janceedunn

It’s a sun-drenched morning in California’s West Marin county, and Chef Michael Tusk of Quince, San Francisco’s three-Michelin-starred temple to California contemporary cuisine, is presiding over the kitchen. It’s a hive of (socially-distant) activity: six workers are busily chopping, roasting, and saucing in the savory kitchen, while three pastry workers are fashioning a trio of various breads to be served later that night.

Tusk is not at the flagship Jackson Square dining room, however, which remains temporarily closed due to COVID-19. As the pandemic continues to roil the dining industry, Tusk and his restaurateur wife Lindsay are devising new ways to take care of their guests, their workers, and the local farmers.

For starters, they’ve relocated their operations to Quince at the Farm, about an hour’s drive from the city. There, diners will have their choice of two bucolic locations where they can enjoy alfresco meals amongst fields, vineyards, and olive groves: Fresh Run Farm, Quince’s 20-acre coastal farm near Bolinas operated by third-generation farmer Peter Martinelli, or McEvoy Ranch, set in the region’s undulating hills.


“The fertile area of West Marin county is outside our doorstep, and I really wanted to focus on that,” Tusk says, spreading his arms. To make the experience even more special, each meal includes a farm tour where they can pick one of the over 40 varieties of heirloom fruits and vegetables grown exclusively for the restaurant to take with them.

“This has been fun for both us and the guests, and something I’m going to continue to do in the future,” says Tusk. “Guests love that they can learn the story behind what is put on their plates, and forge a deeper connection to what they're eating. And from a flavor standpoint, the sooner you put something on a plate after it’s harvested, the better it will taste.” 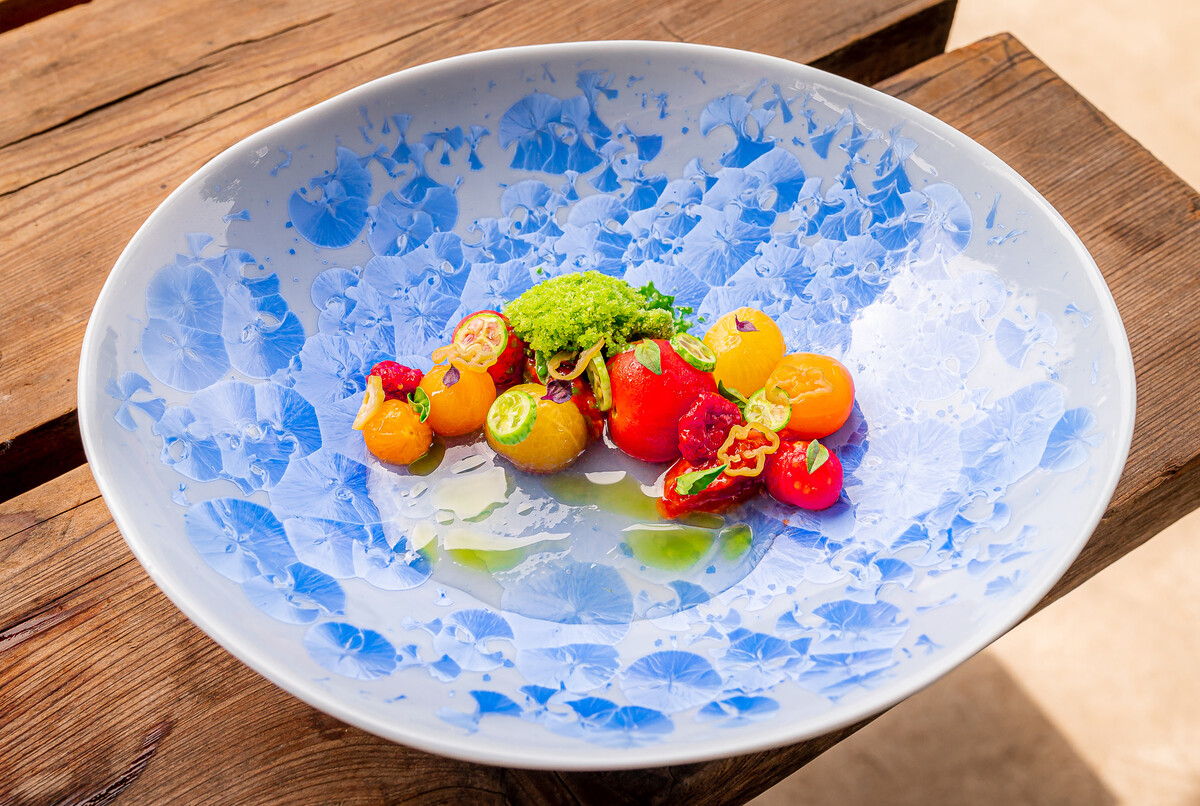 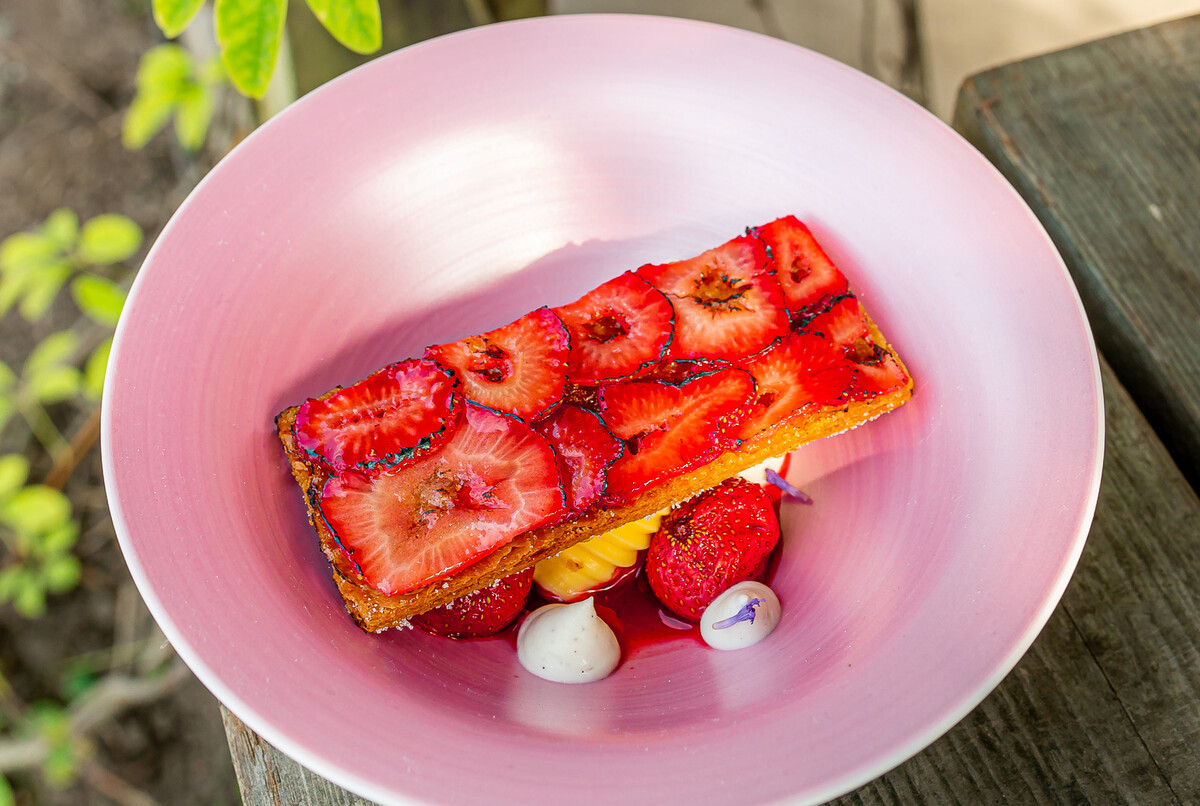 A New Jersey native, Tusk holds a degree in Art History from Tulane (and is an avid collector of art and photography, from Nan Goldin to Sally Mann). Not surprisingly, he brings his artistic sensibility to his creations—asparagus, for instance. “My dream is to be able to grow white asparagus on the farm, and contrast it on the plate with the green we already grow.”

This year, Quince is nominated for the James Beard Foundation’s highest honor: Outstanding Restaurant. While he and Lindsay are delighted, they have more pressing concerns: After their restaurants closed, they couldn’t provide jobs for many team members such as servers and cooks, some of whom weren’t able to collect unemployment benefits.

They sprang into action—who better at improvising than a chef?—and established a non-profit charitable foundation called Feed the Future. The goal is to provide immediate financial assistance to people in the restaurant industry and local farming community who have been negatively impacted by COVID-19.

“We want to treat people who grow, sell and serve our food as truly essential,” Tusk says. “You’re nothing, really, without your suppliers, especially the smaller independent ones. We all have to take care of each other.”

The Tusks’ vision for Feed the Future is a healthy local food economy where sustainable small farms and farmworkers are able to flourish, and consumers are more connected to the sources of their food. To that end, Quince at the Farm has been an unqualified hit. “A lot of folks say they haven't been out for a dining experience since they started sheltering in place,” says Tusk. “And you can see how happy they are when they're directly next to the cranberry bean field or the place where the onions are growing—it just puts them at ease, and makes them feel safe, because they’re immersed in the scents and sounds and feel of nature.”

Recently, a group of visitors harvested sunchokes before lunch. “The plants grow very high, like ten feet, and a lot of people can’t tell what they are,” he says with a laugh. “You get in the field, and pull the entire plant out, and when you do, a big cluster of white sunchokes the size of a football pops out of the black soil.” The group was amazed. “Then I told them, ‘You’re about to have this as one of your courses.’”

Tusk wants to do more of these direct encounters with food sources, which he says enriches the entire dining experience and renews appreciation for those who grow our food. “This is how we going to really turn the tables and promote positive change in the industry,” he says, and smiles. “It helps us all bond together, and live another day.”