Troisgros. It means a fabled family, a peerless restaurant, 50 years of three Michelin stars. And, in recent months, a tremendous risk that has paid off beautifully: reinventing a legend in the countryside, a few miles from Roanne.

Benoît Peeters is an eclectic author. Scriptwriter of the famous comic strip series Les Cités obscures, he is also the biographer of Hergé, Paul Valéry and Jacques Derrida. In Comme un chef (in collaboration with Aurélia Aurita), he recently revealed his passion for cooking.

In 1977, it was the first major restaurant I’d ever been in: As I shared in my culinary autobiography Comme un Chef, it was a dazzling, almost mystical experience that ignited my passion for cooking.

Which is why returning to Troisgros was preceded by great anticipation and emotion. And a tinge of apprehension. Would it still have that magic, this new place where Michel and Marie-Pierre Troisgros, their son César, and their staff decided to resettle in February 2017?

We are here, and the place has won us over in a matter of minutes. As soon as we set down our bags in the vast guest rooms overlooking the garden, we take a tour of the estate with Fanny, César’s partner. Seventeen hectares of pastures, ponds, and forests.

The garden is already lush and vigorous: It was planted well before the move. Here, in a corner of the kitchen garden, are the aromatic plants that Michel and César use every day. The orchard boasts about a hundred fruit trees: apple, cherry, plum, apricot, fig. A stone’s throw away, sheltered from the wind, are pomegranate, jujube, kiwi, Sichuan pepper and persimmon.

Here, a grassy labyrinth; there, a mulberry tree upon which each visitor is invited to hang a wish; paths that seem to have been in place since time began, though they were created by the establishment’s new masters; a handful of boats for those wishing to venture onto the waters of the pond; a foal gamboling across the meadow at a speed of a future Preakness champion.

The Troisgros transformed the buildings with help from their friend Patrick Bouchain, the architect responsible for Le Lieu Unique in Nantes, as well as La Grenouillère, Alexandre Gauthier’s restaurant in La Madelaine-sous-Montreuil. They had already collaborated designing La Colline du Colombier in Iguerande. In Ouches, they wanted an unaffected architecture of simple beauty, a reflection of the natural surroundings. The exquisite structure of the old barn renders the farm building a veritable cathedral. All about us are materials at once rough and precious, subtle luxury, simple sophistication. Nothing is hidden, yet all is made beautiful, like this raw concrete, bearing the imprints of long wooden planks. 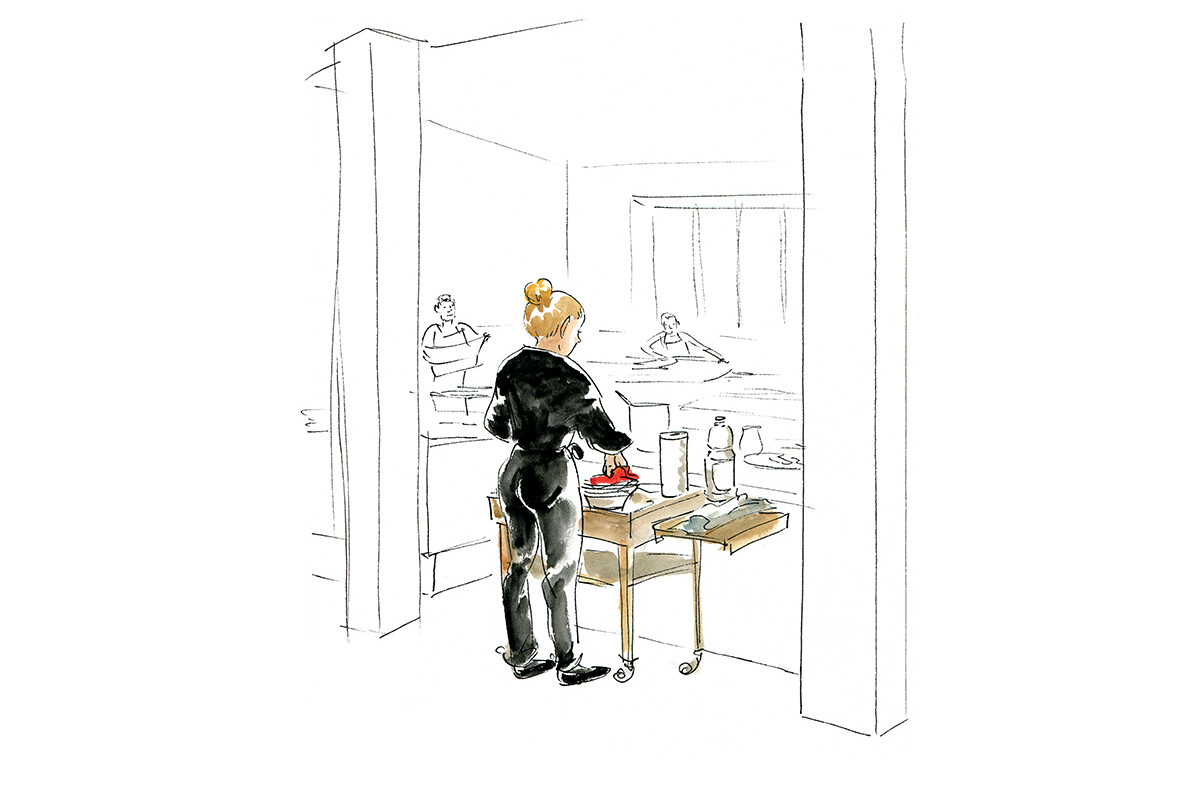 At last, we arrive at Le Bois sans Feuilles – “The Leafless Wood.”  This restaurant, built around an ancient oak tree, has floor-to-ceiling glass walls on all sides with breathtaking views of the grounds. Its slender pillars and latticed ceiling give it the look and feel of a forest. Softly, slowly, the light evolves as evening falls. The servers, uniformed in black and forest green, emerge from the shadows like so many woodland sprites.

The main menu follows a tonal theme of rouge aux lèvres. An almost monochromatic dish, a potent, fresh opener that revives and prepares the palate: noisette of pigeon, a dazzling tomato, pickled radishes and eggplant, wild strawberries, a sprinkling of currants of red and black, a drizzle of plum vinegar.

But here is a voile de lait, “milk veil,” to add calming creaminess. It takes courage to disturb this white perfection, graced with a thin stalk of fried fennel, to discover the orange tint of the mussels and chanterelles. The first dish had no need for wine, already made regal by the Condrieu.

Fleur d’écrevisses, framboise et poivron, the “Crayfish, raspberry, and sweet pepper blossom.” Beneath the green peppers are crayfish topped with a tiny slice of pancetta. A lively dish of contrasts, perfectly paired with a sumptuous Côte-Rôtie.

Selle d’agneau “primavera” – Saddle of lamb primavera. The lamb is uniformly pink, unfailingly tender, with crispy skin. But it is the shitake-and-chard garnish that truly impresses. The dark sauce heightens the chard’s flavor. 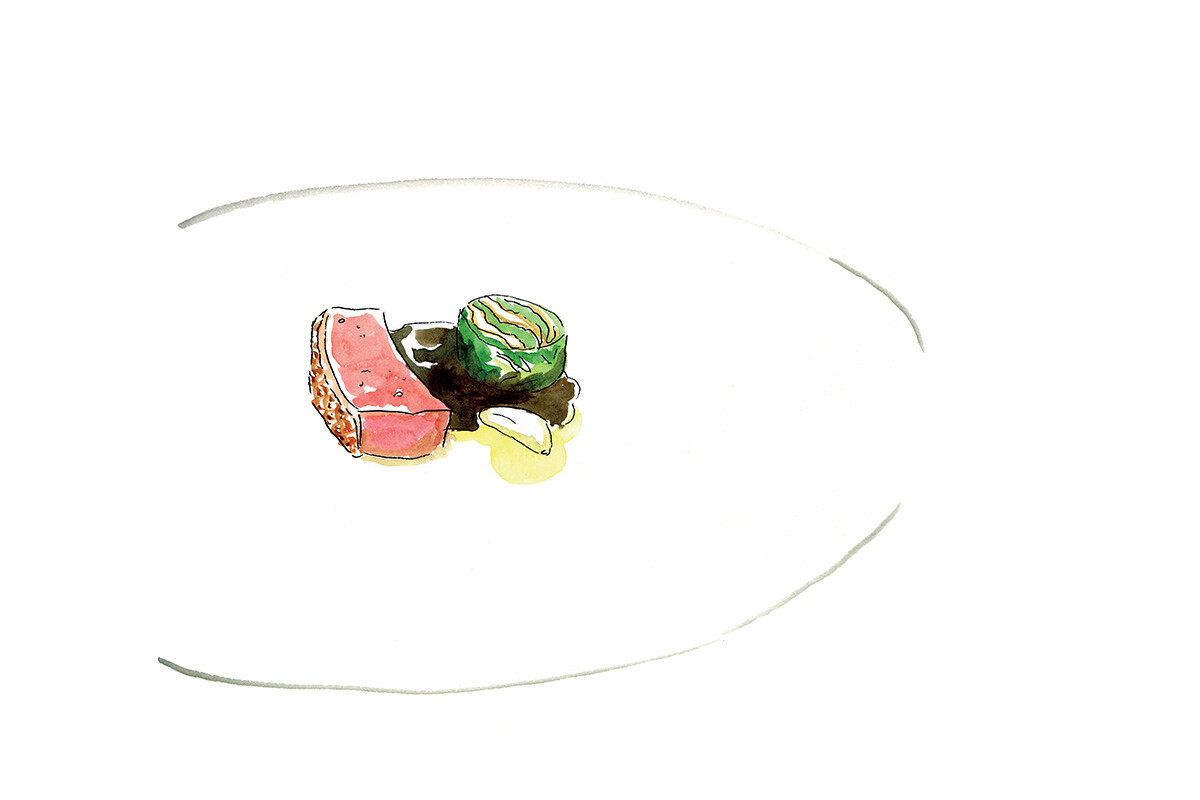 Œuf à la coque: Though named a “Boiled egg,” this first dessert is an amusing trompe l’oeil. Hiding beneath the chocolate shell is a white bavarois with a cheery yellow center made of passion-fruit cream. The nest is crafted of slender straws of dried confectioner’s custard lightly tinged with basil. 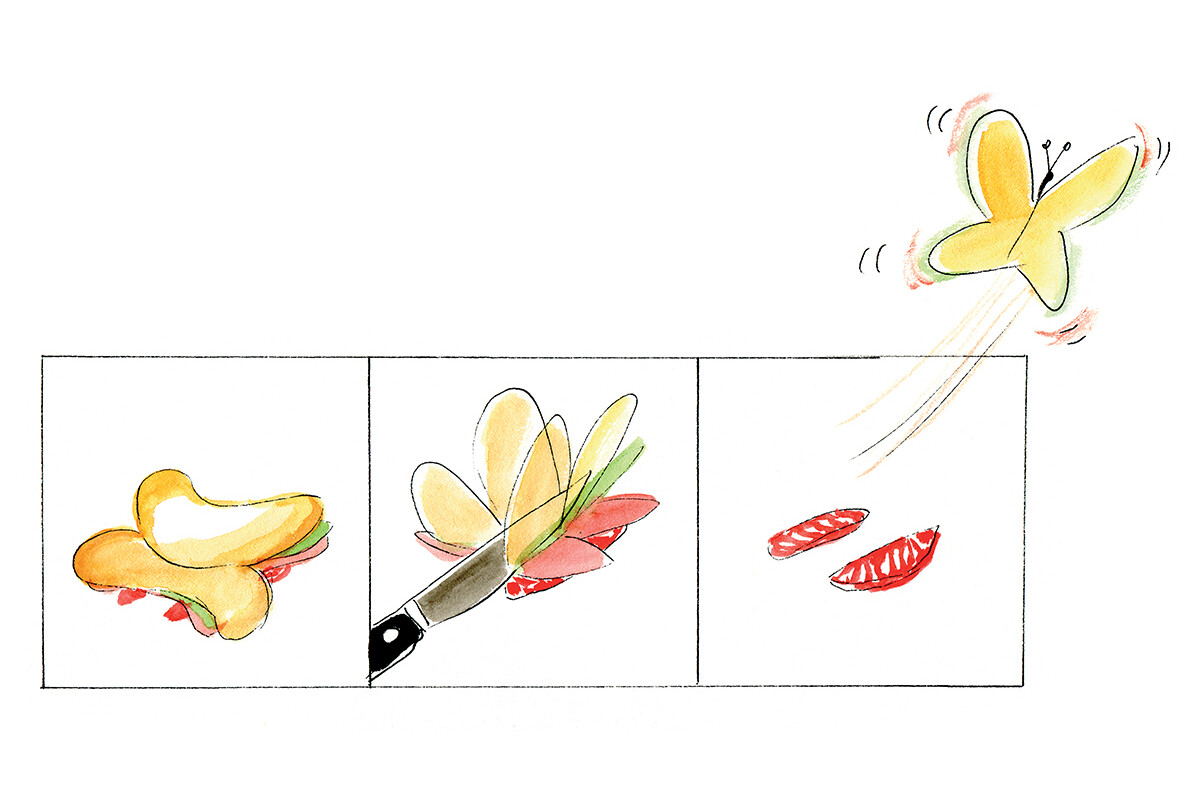 Le Papillon: It is the server who releases this butterfly, cutting it down the middle in a single blow. The golden sweet-potato wings open without breaking, revealing a fruity cream, pink grapefruit, and wild strawberries in a small dish. It is more the dessert of a cook than a pastry chef that concludes this exquisitely executed menu with such luscious life. Because a great meal is more than a series of dishes: It is a journey along which nothing is repeated, and every element complements the others. 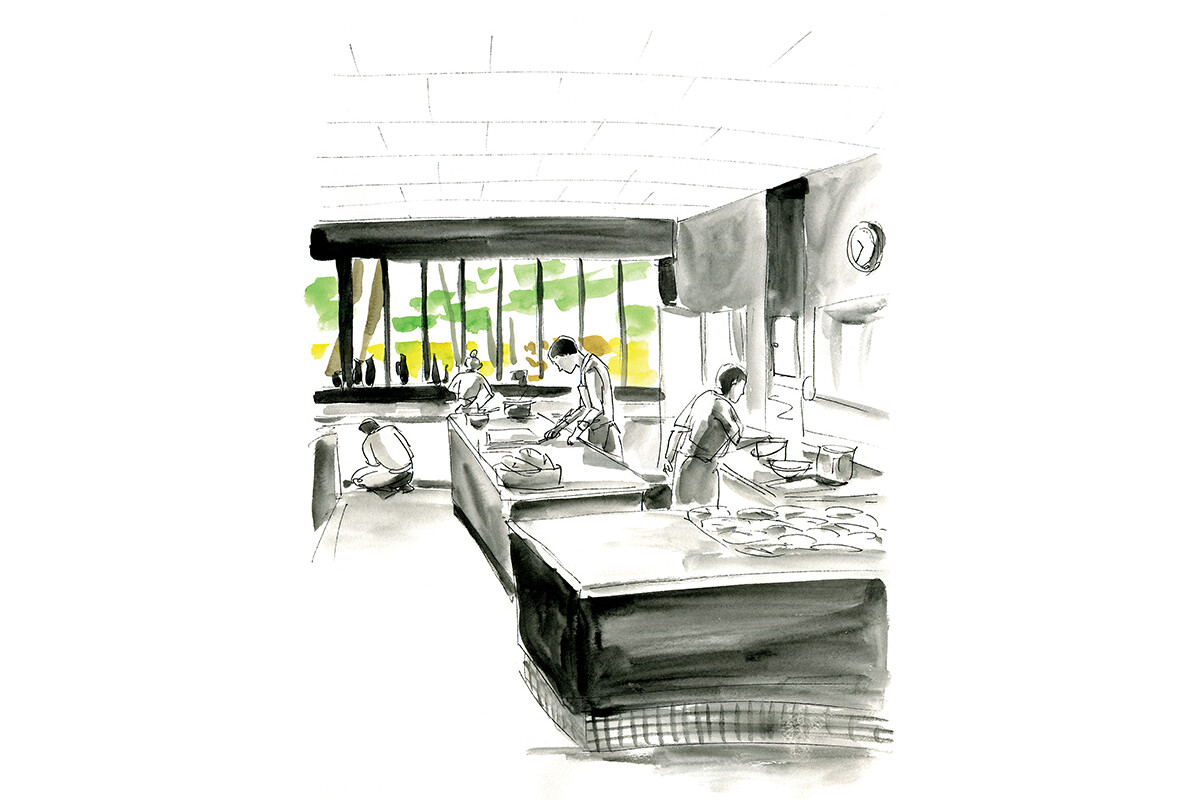 The next morning, shortly before 11 o’clock, we join Michel Troisgros in the colossal kitchen that opens onto the garden. With equal parts emotion and enthusiasm, he looks back on the challenge presented by this move: “Everyone thought we were crazy at first, telling us it would be a total disaster. But, with Marie-Pierre, we were convinced we had to make this dream a reality. We’d really done all we could in Roanne, extracted the marrow from that experience. If we wanted to give the new generation a chance, we simply had to make this change. Patrick Bouchain was reluctant at first: He feared it would be an uprooting, breaking with the establishment’s venerable history. But as soon as he saw the premises, he sensed their potential. Even though we’re only five miles outside of Roanne, we’re deep in the countryside, in a powerful, soothing, natural environment. When we decided that people would enter through the barn, crossing it from one side to the other, showing all the different trades and skills that make this place possible, our plans just flowed naturally from there. We really did this as one big group, a collective effort with the teams. And it’s been a renaissance of sorts, for all of us.”

Others would have taken advantage of a move like this to increase an establishment’s capacity. But the Troisgros, believing that such an exceptional place has a scale that should be respected, chose not to expand: “There’s dining seating for 55 and 15 rooms, like we had in Roanne. But as far as the hotel goes, this question of scale has found new meaning in Ouches, and I really believe that the experience is much more powerful for guests staying here. You can sit on the terrace or in one of the lounges, walk in the orchard, put on your boots to go to the pond.”

In the kitchen, things are reaching a fever pitch, yet everything remains calm, nearly silent. Each person is focusing on his or her duties. Michel motions to César, asking him to join us. “Though our cuisine has always been an evolving art, this move was a catalyst. César’s role became more pronounced. He’s often the source of new dish suggestions: we taste them together, critique them, tweak them. A dish, even if it’s à la carte, is in constant motion. If I feel that something has veered off course in recent weeks, we’ll search and search until we identify the tiny detail responsible for the change. Because the vibration of a dish can be lost, like a flower that starts to fade. Seasonality is one of the things that make our profession so exceptional, a joy that takes on a new form each year. By the end of their season, we’re getting tired of asparagus, cherries, or melons, but soon are impatiently waiting for them the following year. A chef’s life is punctuated by the lives of ingredients at their peak.”

César comes to join us. “Plants are gaining a lot of ground in my cooking,” he adds. “Of course, the garden’s a very big part of that change. I spend a lot of time there. I don’t really like the word ‘permaculture’ – it’s  a catchall term that’s overused. I prefer the term agriculture raisonnée, or integrated farming. For a while now, I’ve been interested in the Auvergne fava bean, a variety that has nearly vanished and that we’re trying to bring back.”

It is noon. Everything is in place for the lunch service. Marie-Pierre, César, Fanny, and Florian share superb stuffed tomatoes, while Aurélia paints one last watercolor. Our time here has come to an end. In the car that takes us back to the Roanne train station, we are already dreaming of our return, perhaps to stay in the smaller lodge, quaintly and tastily christened La Maison des Kakis, the Persimmon House. 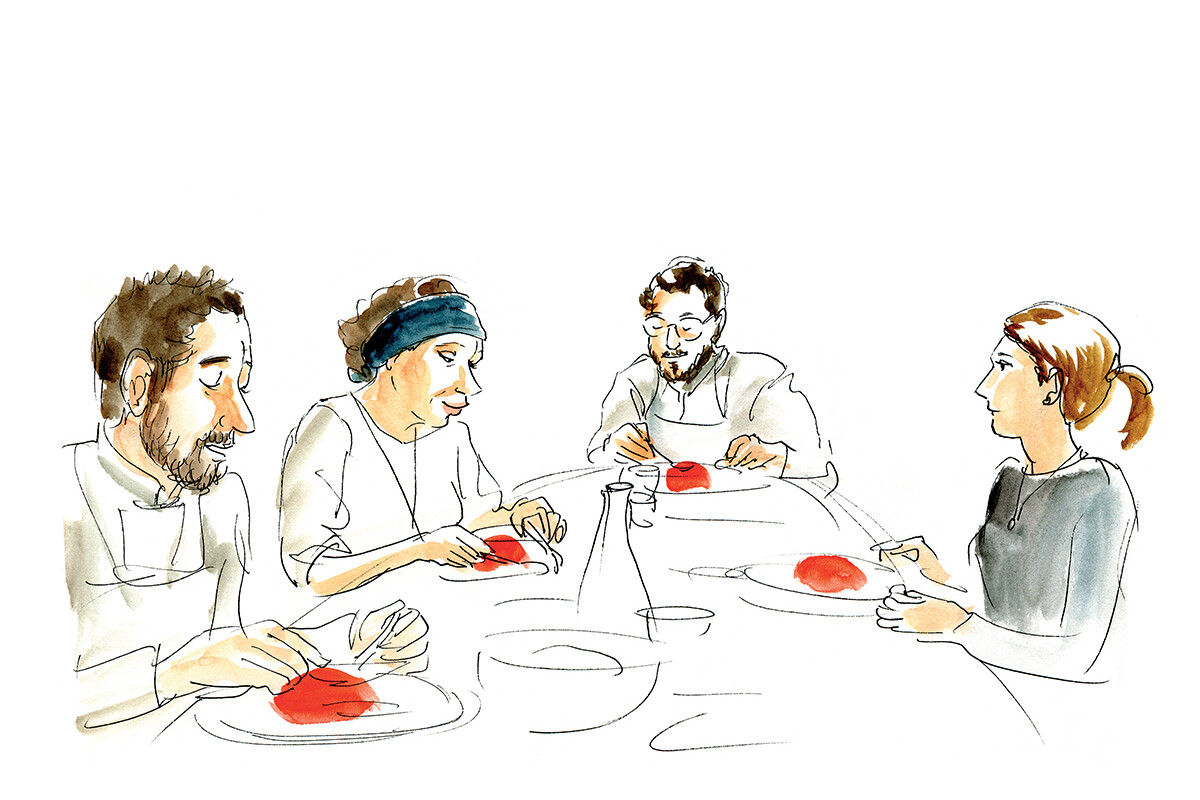