Château d’Audrieu in the Normandy countryside is immensely pleased with having hired Nazar, a young Afghan man with boundless determination. Here is one story born of the partnership between Relais & Châteaux and the Refugee Food Festival, helping refugees start new lives through cuisine.

Since its founding in 2016, the Refugee Food Festival has made food trucks and team-made meals springboards for employment opportunities, pairing a restaurateur with a cook from Syria, Afghanistan, Georgia, or Sri Lanka. Last June, for the event’s fourth year, 15 cities around the world played host to such charitable culinary collaborations.

But Nazar’s five-star service at a gourmet restaurant in Calvados inspired the charity’s co-founders, Marine Mandrila and Louis Martin, to embrace a new challenge: “We wanted to take vocational integration to another level, beyond the annual festival period,” says Marine. “By forming a partnership with Elior and another with Relais & Châteaux, we can show how incredibly adaptable refugees are and highlight how helpful they can be to a sector that’s constantly searching for manpower.”

Hired on the spot

As the story goes, on the evening that the season was starting, March 29th, Château d’Audrieu’s new Maître de Maison was feeling quite alone. Literally. “The three servers that I’d taken great pains to recruit told me that they wouldn’t be coming back,” recalls 46-year-old Jérôme Charaoui. Alas, that silver tray must have been too heavy! The discipline of a gourmet restaurant must have been too strict! The demands of guests accustomed to five-star standards must have been too exacting! “Nazar doesn’t even think twice about such things. After all he’s been through, nothing scares him,” explains Chef Olivier Barbarin. “He’s a great coworker – always has a smile on his face!” confirms Théo, the parking valet. The clients, though, couldn’t even imagine the path this thirty-something gentleman followed from the Afghan mountains to the Norman bocage.

“When my friends come out here, they need more than a GPS – I have to guide them all the way. But Nazar? He showed up on foot, without even asking for the address, at 7 o’clock in the morning, clean-shaven and dressed in a dark suit,” Mr. Charaoui recalls. Nazar hadn’t studied at a hotel school, but who really cared? He was one of the lucky ones to cross paths with the Refugee Food Festival. “Rather than trying to pretend he knew what he was doing, he just said, ‘Show me, and I’ll do what you do,’” Chef Barbarin tells us. The Afghan proved to be a quick study, shouldering responsibility better than many young Normans. At breakfast, he carries the baskets of bread and pastries from a bakery that uses wheat from the plains of Caen. Come dinnertime, the pressure mounts with a dizzying roll-out of the five to seven courses required by the Gourmet or Epicurean menus: Cooking turbot demands exactitude; sophisticated jus, emulsions, and condiments mean the pace can never flag. Yet Nazar remains serene under all conditions.

A string of lucky opportunities

In a world where things are always “complicated,” Nazar seems to find everything simple. Sitting in a designer chair facing the bar, the young man recounts his journey as a string of lucky opportunities that he had the presence of mind to seize. When an explosion killed one of his brothers, after the endless civil war took the lives of three other siblings and his father, the man no longer saw any future in Mazar-e-Sharif, between the Taliban, Daesh, and the corruption of those in power. So he whispered to his wife, “Don’t say a word to my mother, don’t say a word to anyone, but I’m telling you that I’ll be leaving soon. I’ll go to Turkey, or further into Europe if I have to, and as soon as I can bring you and the children over, you’ll join me.” The journey began on foot, across Iran, as far as Istanbul. A fellow countryman introduced him to his boss, and the woman hired Nazar to work in a garment workshop. “I told her I wanted to learn how to sew, because I’d never touched a machine. But after two days, she said I was a liar because I was sewing as though I’d done it all my life!” he says with pride. It wasn’t a bad job, but Nazar couldn’t imagine being a clandestine worker forever. After three months, a smuggler offered him a seat on a captainless plastic vessel heading for Greece. He turned over his savings and took a place aboard.

The fairy godmothers of the Refugee Food Festival

Nazar has never told his Château d’Audrieu colleagues about how terrified he was when the Mediterranean’s churning waters swallowed two of the four boats that left the coast that night. This man of quiet strength prefers to focus on how he was plucked from the mass of migrants stranded on a Greek island and hoping to make it to Athens. “We were lined up waiting for a spot on a boat, packed so tightly we couldn’t lie down. I was Number 3848. A police officer asked if anyone spoke English and no one raised their hand, so I stood up.” After entering the identity and nationality of the 800 stranded humans on a spreadsheet, a police officer took pity on him and escorted him to the boat that would take him to the mainland. Nazar continued to follow his path of seeming happenstance and hung his hat in Pressig, a village in southern Germany that was short one player on its soccer team. “I’d mostly done wrestling in college, but I volunteered anyway.” Six months later, Nazar felt his teammates still regarded him as a foreigner, so he packed his bags and moved on.

In Paris, he faced days and nights on the sidewalk, fist fights, rain. Nazar would offer to help those who were more vulnerable and had fewer language skills than he. “When I help people, it helps me, too,” he says modestly. With the few words of French he learned on the Internet, he stepped in as a translator and, over the course of interactions with migrant aid associations, employment centers, and France’s family benefit agency, he gained confidence. He was transferred to Hérouville-Saint-Clair in Calvados, a department in lower Normandy, where he made contact with Madame Émilie, Mademoiselle Fanny, and the other fairy godmothers of the Refugee Food Festival. They verified his legal status, sensed his potential, and put him in touch with a man searching for personnel: Jérôme Charaoui. “If each of the 630 Relais & Châteaux properties welcomed a refugee ...,” sighs the Maître de Maison, who has never forgotten that his own grandfather made the trip from Syria.

Honoring the promise to welcome others

In this historic monument where many Americans come to experience the France of eras gone by, Nazar impresses guests with his distinguished and naturally gentle style, despite his shy manner. “I could easily see him as a maître d’ or dining room manager at a major establishment,” says his manager. “I don’t feel I hired Nazar out of compassion, but as a way of honoring the trade’s promise to welcome others. And I feel that goes just as much for employees as it does for customers,” Mr. Charaoui explains.

Now in the bosom of a small company and receiving regular pay, Nazar is focused on keeping the promise he made his wife. In a phone call a few weeks ago, his daughter had him listen to the rockets exploding a mile or so from their home. All the more motivation to work on past participles and prepositions. In the meantime, he surprised the staff by bringing in a pan of Kabuli palaw (an Afghanistan pilaf), a way to thank them for introducing him to castle life. 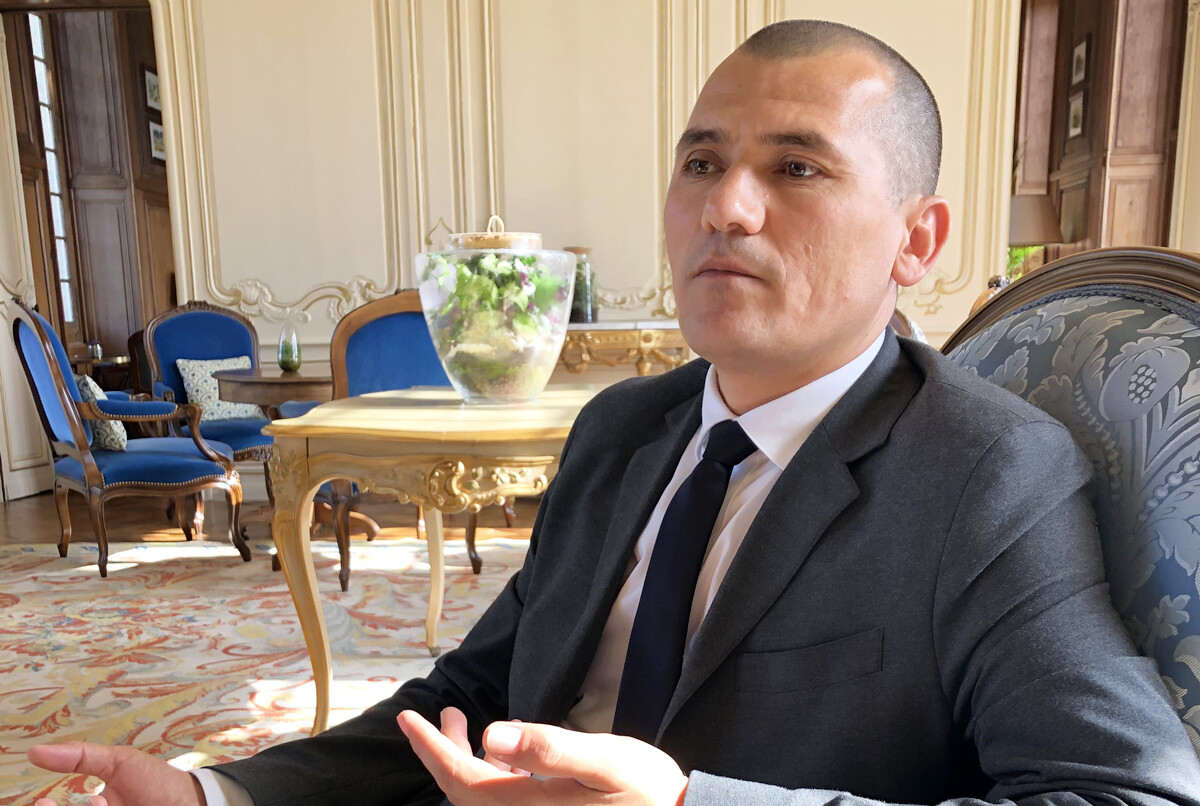 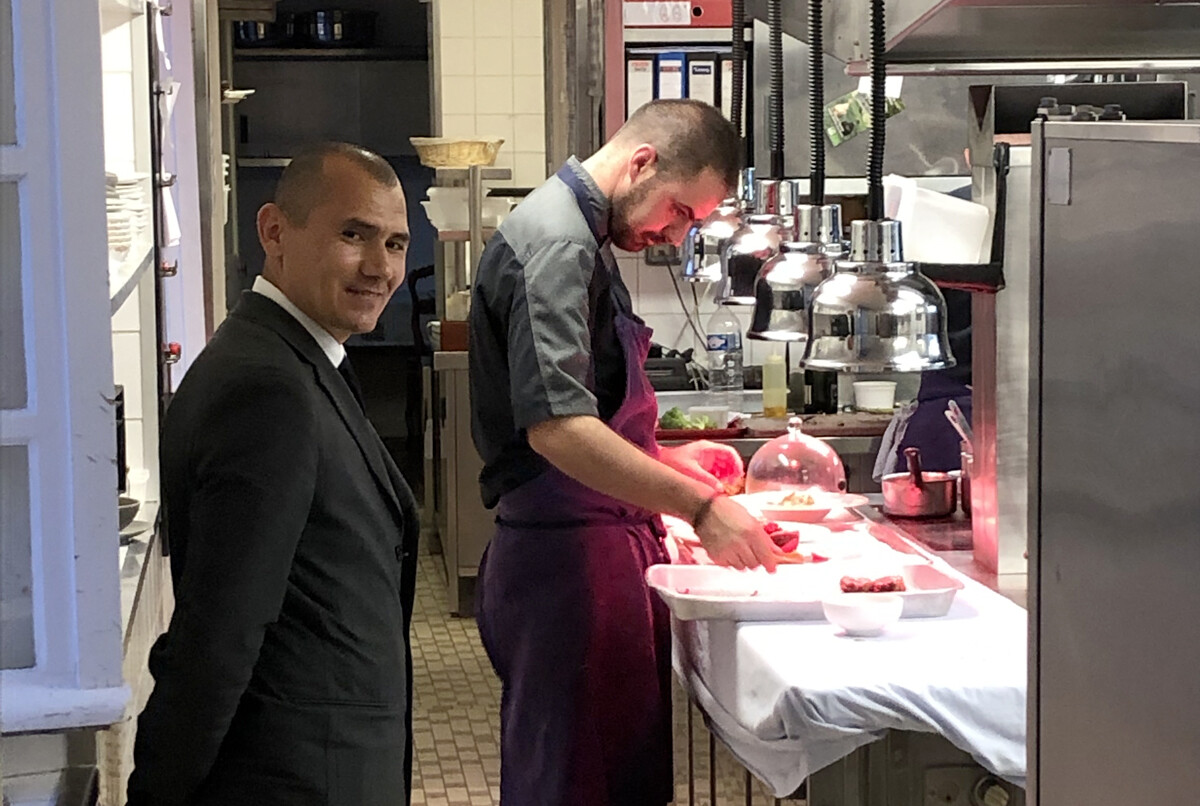 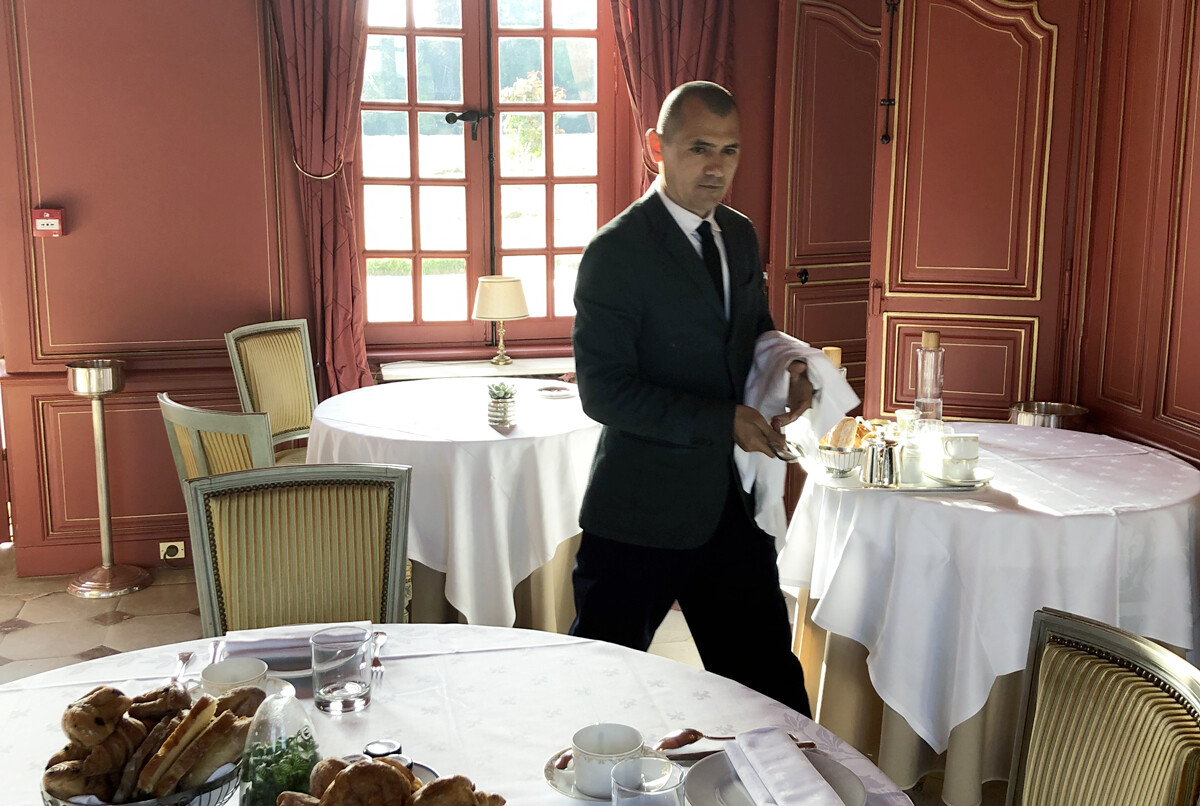 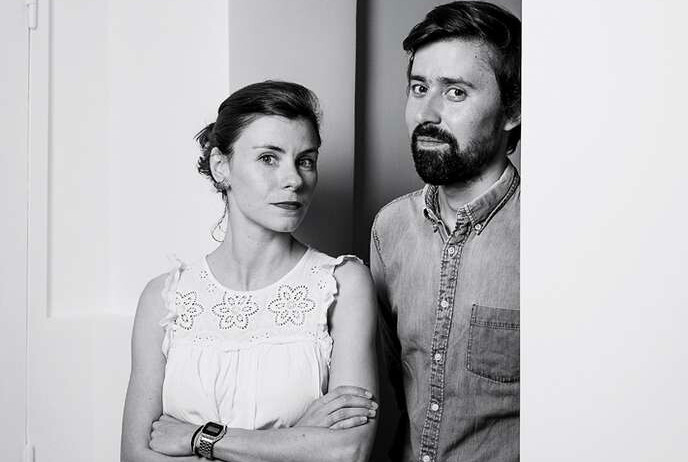 The partnership between the Refugee Food Festival and Relais & Châteaux began with a constructive encounter with Olivier Roellinger in 2018. How did the collaboration develop from there?

Marine Mandrila: The Refugee Food Festival was created in 2016 with the intent of changing people’s perceptions of refugees and helping them integrate French society through cooking. Olivier Roellinger, a great chef and traveler open to all culinary cultures, came to an event we were attending at Le Carreau du Temple and said he wanted to help. Beyond the €10,000 of financial support Relais & Châteaux provided in 2019, he encouraged us to form a long-term partnership.

So you have shared values, but have needs to be met, as well.

Marine Mandrila: Relais & Châteaux member establishments are constantly searching for qualified, motivated staff, while we’re helping refugees whose legal paperwork is completely in order, making them immediately employable, all happy to work in the food-service world. When I explained the RFF’s objectives to the Relais & Châteaux France General Assembly in Avignon on March 18, 2019, the members immediately grasped the advantage of connecting these two worlds that otherwise have no contact.

So what specific needs can you meet?

Marine Mandrila: In the eight cities where we operate, we’ve identified 20 to 30 men, most of them alone, capable of taking jobs as dishwashers or apprentice chefs, and they’re eager and motivated to learn. Relais & Châteaux properties often have housing and are accustomed to training staff. That’s how Nazar, an Afghan refugee looking for a job in Caen, was able to join the team at Château d’Audrieu and be so warmly received by Maître de Maison Jérôme Charaoui.

How do you see this partnership developing over the coming season?

Marine Mandrila: Experience tells us that there’s no reason to fear a culture clash between the exacting standards of these luxurious establishments and the situations these men face after life forces them to start from scratch. The refugees we work with have gone through trials and tribulations that give them great determination to integrate.Their presence is a source of pride for the other staff, feeling they’ve given someone a chance, offered a helping hand. The refugees also bring another culinary culture into the mix, a window into another world. Need meets necessity, and everyone wins.