A steward of sustainability, two-Michelin-star Chef Shinobu Namae of L’Effervescence walks Charles Michel, food activist and educator, through an enchanting story about how everything is connected, from ocean to dish. The hero of the story is shottsuru, a traditional Japanese fish sauce.

Working at the intersection of science, art, philosophy, community and entrepreneurship, Charles Michel is a Food Educator and Activist who aims to inspire solutions for urgent global challenges.

Shottsuru is a traditional Japanese fish sauce featured in Slow Food's Ark of Taste catalogue, made by layering and fermenting salt and hatahata (sailfin sandfish). Chef Namae-san explains that hatahata was overfished in the 1980s in Akita prefecture waters, but a halt in fisheries' activity from 1992 to 1995 allowed the fish stock to replenish.

Unfortunately, however, the stock has not yet returned as much as scientists had hoped, as ocean acidification and warming temperatures are causing desertification of coastline seabeds. Seaweed forests serve as habitats in which the fish lay their eggs for reproduction. Without their habitat, the hatahata population cannot return to normal, which not only threatens the future existence of shottsuru as a seasoning, but, more importantly, the marine ecosystem as a whole. Chef Namae-san leaves us with a lasting thought: Ecological issues and the contradictions around them can all be mitigated with a bit of universal care and understanding. Food is a powerful force for change. 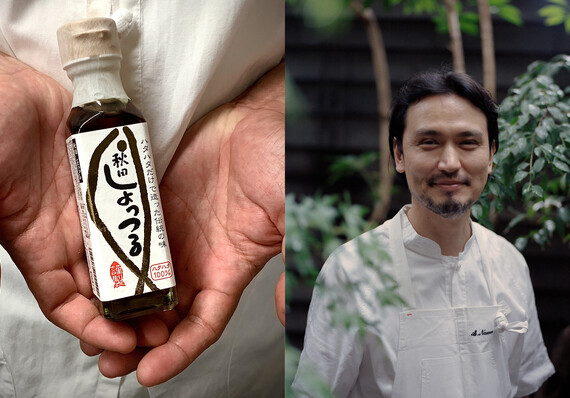 Chef Namae-san serves the shottsuru with line-caught bonito and warns about tuna caught en masse – often destined for aluminum cans – that may face overfishing issues, just as hatahata did in the 1980s. Traditional shottsuru is at risk of being lost not only due to climate change, but also as producers switch to more modern production methods. To support the production of this ancestral fermented fish sauce, Shinobu Namae has developed a close relationship with his shottsuru producer, thereby supporting a tradition to keep it alive for future generations. 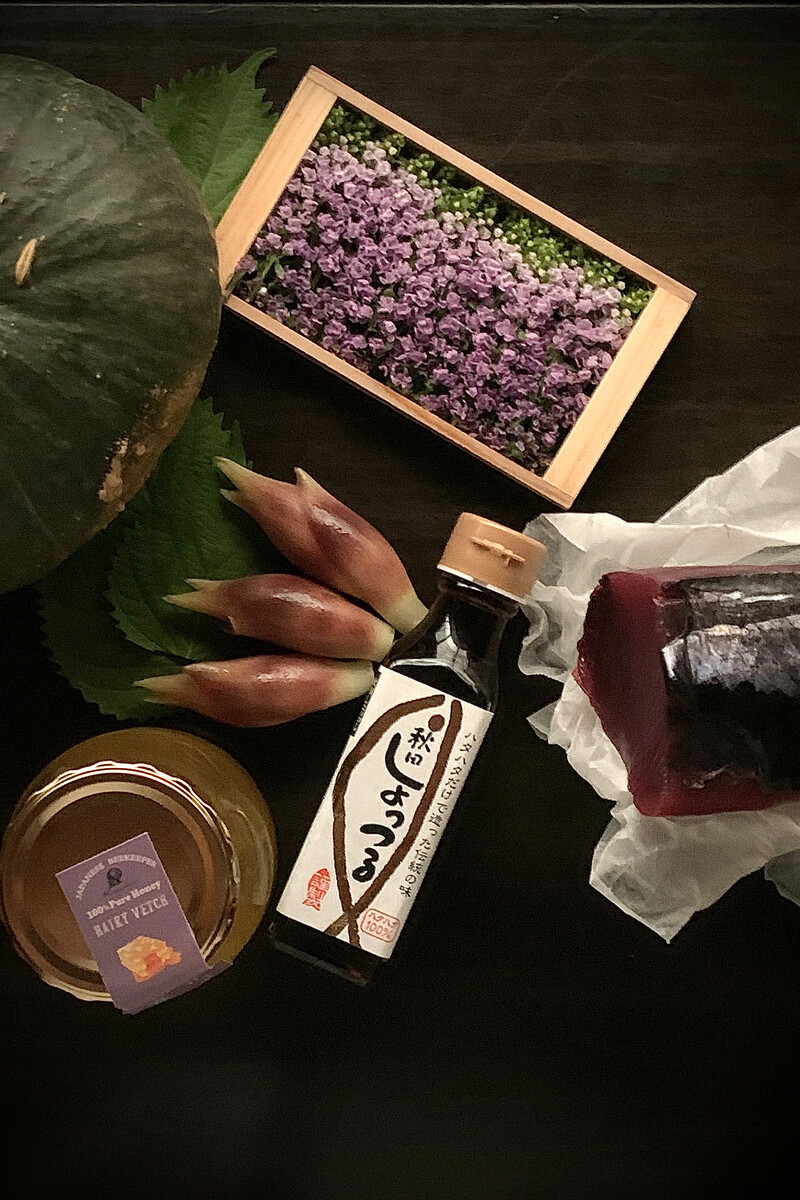 Slice a bonito fillet into sashimi-sized pieces (10-15g per piece) and glaze oneside with shottsuru sauce*.

Brush shottsuru sauce* onto the plate. In layers, plate some pumpkin puree**, shiso leaves, and a piece of bonito. Repeat this layering a second time.

Sprinkle shiso flowers on the plate and place 2 halves of pickled myoga flower***.

Pour bee honey (ideally Japanese indigenous bee honey) into a small pan and heat until it begins to caramelize.
Stop the caramelization by putting shottsuru and red wine vinegar into the honey.

Roast the pumpkin in the oven.
While the pumpkin is hot, combine with milk, unrefined dark sugar and sea salt. Blend it into a fine puree and incorporate the butter. Chill in refrigerator.

Place all ingredients except for myoga flowers into a pan, and heat it to a rolling boil. Bring mixture to a boil, then let cool.
Cut myoga flowers in half and place in the pickling liquid to marinate overnight.