Add to my favourites
“Mihir Garh acts as an envoy of Rajasthan's rich heritage and culture. The majestic fort seems to emerge from the desert and complements the rugged beauty of the land.”
Maître de Maison - Bhupendra Pratap Singh
This superb “Fortress of the Sun” overlooks the Thar desert, right in the heart of Rajasthan. Mihir Garh, designed throughout by Sidhart Singh and his wife Rashmi, was born out of their desire to share this heaven on earth. The fortress mirrors the architecture of the local villages, with its rounded edges, open fireplaces and alcoves, and the colour of the stone merges seamlessly with the surrounding sand. Mihir Garh stands as a tribute to this land swept by the desert winds and has been designed as an eco-friendly hotel. Each suite provides a unique place to relax, where luxurious appointments act as a foil to the mineral sand of the surrounding desert.
TRIPADVISOR traveler rating: 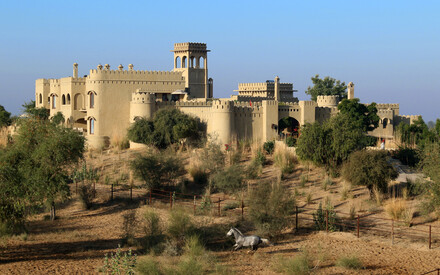 Based on 246 reviews
Read reviews
Our services
See all services

From the start, Mihir Garh has focused on responsible tourism, with local craftsmen involved in its construction. Today, this approach continues through the hotel’s deep connections with local communities and the region’s heritage.

A centerpiece in these is Mihir Garh’s Village Welfare Fund, which invites guests to donate to a range of community projects. The hotel has helped build infrastructure for schools, installed cisterns for clean water storage in local villages, and operates educational medical camps that cover issues from eyes, through epilepsy, to young women’s health. It is also heavily involved in the protection of an indigenous regional horse, the Marwari. The breed now thrives at Mihir Garh, with the hotel playing an active role in the Marwari Horse Society, of which the UK’s Duchess of Cornwall is a patron.