This property is annually closed. Reopening on 3/30/23

Add to my favourites
“A residence with the charm of yesteryear”
Maître de Maison - Jérôme Charaoui
Château d’Audrieu, located between Caen and Bayeux, is an opportunity to travel back in time. This 18th-century edifice, listed as a historical monument, offers the warm welcome of a family home. The elegantly proportioned château is set in an extensive 25-hectare wooded park with magnificent gardens. Turn the pages of history and discover not only the beaches of the D-Day landings, but also Bayeux and its famous Tapestry of Queen Matilda; Caen, the home of the Dukes of Normandy; Mont-Saint-Michel, a treasure of French heritage; and the gourmet delights at Le Séran, Château d’Audrieu’s main restaurant. All the charms of Normandy await you here!
Relais & Châteaux Traveler Rating
Based on 1099 Relais & Châteaux certified reviews.
Read reviews
Maura D.
"EXTRAORDINARY"
From the moment we arrived to the moment we left, we were treated like royalty. The staff was incredibly friendly and accommodat ... Read
TRIPADVISOR traveler rating: 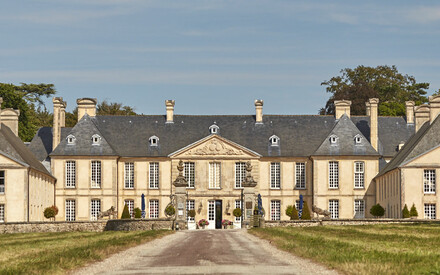 Based on 243 reviews
Read reviews
Our services
See all services