Add to my favourites
“Refinement and simplicity in the Lorraine countryside”
Maîtres de Maison - Sophie and Cyril Leclerc
This charming château is close to Lunéville, a town which Voltaire wrote “felt” just like Versailles. In the so-called “Little Versailles” of the Dukes of Lorraine, you can explore the Baccarat crystal works and Nancy’s famous Stanislas square, a Unesco World Heritage site. Adoménil is an 18th century building that has been beautifully restored and enhanced by subtle touches of modernity. Starred Chef Cyril Leclerc creates audacious gourmet cuisine that gives pride of place to fresh products, many of them from the surrounding Lorraine countryside. The best of both the past and present come together in the courteous service and fine cuisine at this beautiful hideaway.
Relais & Châteaux Traveler Rating
Based on 253 Relais & Châteaux certified reviews.
Read reviews
Zinnia L.
"Secluded"
A secluded retreated with amazing food. ... Read
TRIPADVISOR traveler rating: 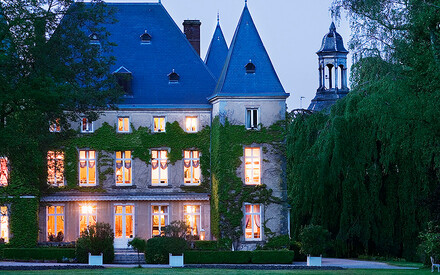 Based on 327 reviews
Read reviews
Our services
See all services