On the South Coast of France, the “Riviera” is the focus of attention.

A long tracking shot across the mountains of the Var and the southern French coast, ducking under a clothesline full of laundry to focus on the skin of a young woman lying in the sun. The opening scene of the 1956 film And God Created Woman introduced both Brigitte Bardot and Saint Tropez. Of course, the site was known before Roger Vadim chose it as the location of his cult movie: an old fishing village on a hook of land jutting into the azure waters of the Mediterranean, a former privateers’ lair full of quaint little squares and ochre-tiled roofs, with its market at Place des Lices and its port lined with pointus – colorful fishing boats whose sterns are tapered as finely as their prows – bobbing gently in the waves. 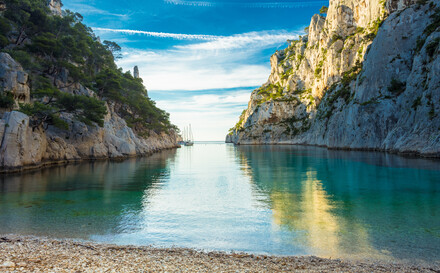 “Take pieces of turquoise, emeralds and lapis-lazuli: there you have the backdrop of the sky. Top it with diamond dust and Roman candles, for the two or three clouds that float above our mountain. And as for the sea – take nothing but the train to come here and see it.” The author Prosper Mérimée, who loved the region, wrote these lines to his friend Madame de Beaulaincourt in 1866. Nearly 150 years later, they are still an apt description of the French Riviera. The French call it the Côte d’Azur, the Azure Coast, bathed by the Mediterranean’s infinite palette of blues from Bandol all the way to the Italian border. The cobalt of the Baie des Anges is indelibly associated with Antibes, where Picasso was an honorary citizen. Between the port and Place du Safranier, the museum devoted to him spotlights paintings, drawings and ceramics by the great artist, who spent much of his life under the sunny skies of Antibes, Golfe Juan, Cannes and Vallauris. 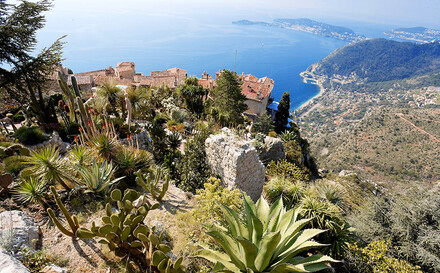