Turkey was central to the Eastern Roman Empire, and then the Ottoman Empire and has lived through turbulent times with conflicts, alliances and grand projects.

Further to the north, the Turkish coast shares with the Greek islands the vestiges of antiquity and the characteristic Mediterranean landscape: olive groves, port villages facing the clear waters of the inlets… On the western side of the Bosporus, between the Black Sea and the Sea of Marmara, minarets and domes of former Ottoman palaces mark the outline of Istanbul’s Golden Horn. The Romans called the city Constantinople when Hagia Sophia was built there, at the time themostmagnificent church in all of Christendom. Its monumental volumes, colorful marbles and mosaics inlaid in gold are still as awe-inspiring as ever. Nearly ten centuries later, the architect of the Blue Mosque, its neighbor, tried his best to surpass the beauty of the basilica — and at least equaled it. 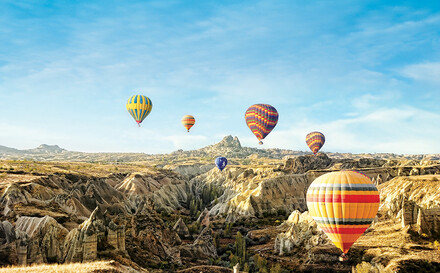 Sitting in the shade with a glass of çay (the local tea) or a Turkish coffee whose grounds scour the tongue, this is the perfect vantage point for contemplating the slowly shifting tableau of ships on the strait. An endless rotation linking Europe to Asia that echoes the entranced whirling of the Sufi dervishes, whose rotation is intended to link the earth with the heavens. In Cappadocia, the mysticism is geological. Erosion has sculpted the volcanic rock of the central Anatolian plateau into otherworldly chimneys, canyons and caves in which the Byzantines painted frescoes, still preserved in a landscape frozen in time. 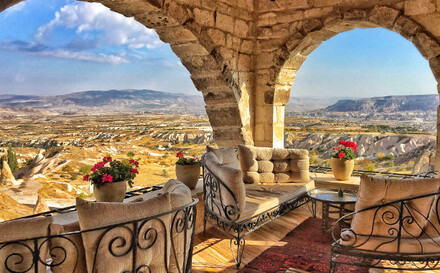