This property is annually closed. Reopening on 4/15/23

Add to my favourites
“An exceptional hideaway inspired by Marco Polo”
Maître de Maison - Ivana Pačić Unković
People say that the Silk Road started from this island; Korčula has good reason to be proud to be home to Marco Polo's house, a stone’s throw from Lešić Dimitri Palace. The building's history dates back to the 17th century, when the Lešić family, rich property owners and merchants combined a number of semi-detached houses to create a palace worthy of that name. It has been meticulously renovated yet with a touch of contemporary design; its historical character and original layout have been retained and it now offers a small number of independent suites. Each evokes a step in Marco Polo's journey towards China, in a harmonious décor, with top-quality materials.
Relais & Châteaux Traveler Rating
Based on 26 Relais & Châteaux certified reviews.
Read reviews
Mark L.
"Stimulating "
An outstanding experience. Great staff. Lovely hotel. Great food. ... Read
TRIPADVISOR traveler rating: 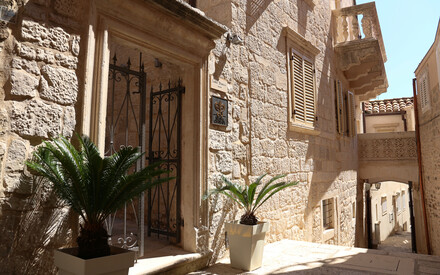 Based on 141 reviews
Read reviews
Our services
See all services