Add to my favourites
“An hour from Madrid, a getaway in a mill”
Maître de Maison - Blanca Moreno
The walls of a 500-year-old flour mill are home today to a delightful family hotel where you can enjoy total peace troubled only by birdsong and the sound of the brook rippling through the grounds. The garden, lovely pool and spa are all invitations in themselves to take it easy in this peaceful ambiance. However, it would be a pity not to explore the Guadalajara area: the historic city of Sigüenza, mediaeval villages, natural reserves, salt mines and rivers in canyons – each more beautiful and interesting than the last. At nightfall, the mill restaurant serves Slow Food cuisine inspired by traditional recipes produced from seasonal, local ingredients.
Relais & Châteaux Traveler Rating
Based on 1139 Relais & Châteaux certified reviews.
Read reviews
DOUGLAS P.
"Great!"
Great massage! ... Read
TRIPADVISOR traveler rating: 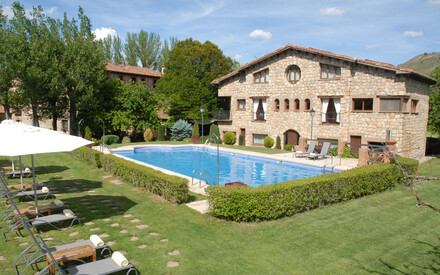 Based on 515 reviews
Read reviews
Our services
See all services