Add to my favourites
77 Rooms
“A fairy tale castle”
Maitre de Maison - Stefano Risolè
In the heart of Milan, discover the splendour of a very unique hotel housed in an Art Nouveau building from the early 20th century. Hotel Château Monfort is inspired by the world of fairy tales and the opera. It is an enchanting place where dream and reality blend together, which is reflected in the retro-chic style that permeates this "Urban Château". The pastel colours that adorn the walls of the guest rooms are enhanced by floral patterns and butterflies. Inside the hotel, you will be captivated by its romantic and refined atmosphere, which extends to our exceptional Rubacuori restaurant, our Mezzanotte lounge bar and our "Amore & Psiche" SPA.
Note: We are working hard to make our SPA even more beautiful and suggestive. It will re-open on March the 15th. Stay tuned!
Relais & Châteaux Traveler Rating
Based on 87 Relais & Châteaux certified reviews.
Read reviews
Thierry G.
"MAGIQUE"
JUSTE PARFAIT MA FEMME ET MOI AVIONS BESOIN DE NOUS RETROUVER DANS UN ESPACE EXCEPTIONNEL, VOUS NOUS AVEZ COMBLER ... Read
TRIPADVISOR traveler rating: 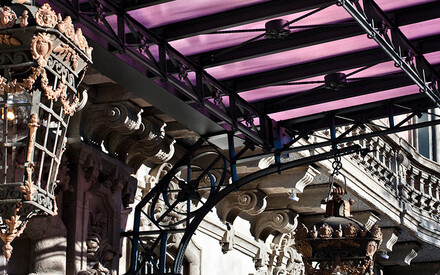 Based on 2090 reviews
Read reviews
Our services
See all services

Château-Monfort is located right in the heart of Milan, next to the cathedral and the renowned fashion quadrangle. This elegant 5-star boutique hotel enables you to experience Milan in 360°, thanks to its fantastic location near the most famous museums and main commercial streets. Designed around the theme of art and fairy tales, 77 superb rooms take you through to a new dimension where well-being and serenity are core features.